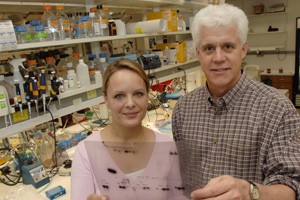 Dr. Eric Olson (right), chairman of molecular biology, and Dr. Eva van Rooij, a postdoctoral researcher, helped discover that a minute snippet of RNA, a chemical cousin of DNA, controls damage to the heart under several types of stress. The discovery could mean that blocking the small molecule might eventually become a way to prevent or treat heart damage.

Newswise — A tiny snippet of RNA, a chemical cousin of DNA, controls damage to the heart under several types of stress, researchers at UT Southwestern Medical Center have found.

The published discovery, appearing online today on Science Express and in a later edition of Science magazine, could mean that blocking the small molecule might become a way to prevent or treat heart damage, the scientists say.

"We've discovered a new and completely unanticipated mechanism for regulating the contractility of the heart," said Dr. Eric Olson, chairman of molecular biology and senior author of the study. "We're very excited about the therapeutic implications, but we still have much work left to do."

The research focused on a small RNA molecule " called a microRNA " named miR-208, which occurs almost exclusively in heart muscle. The molecule is made by a portion of the gene that codes for the alpha-myosin protein.

"We speculated that it had an important function, since it was located in such an important gene," said Dr. Eva van Rooij, a postdoctoral researcher in molecular biology and the study's lead author.

The scientists genetically engineered a group of mice so they couldn't produce miR-208. The mice were then subjected to conditions that would normally damage the heart and increase the amount of beta-myosin. Those conditions included hypothyroidism, treatment with a protein that causes heart enlargement and failure, and increasing how hard the heart had to pump.

In mice that had miR-208 present at normal levels, heart damage occurred. But in the animals lacking miR-208, the heart remained healthier, at least in the short term, and levels of beta-myosin remained low.

The researchers also engineered mice to express three times the normal level of miR-208, and found that they had elevated levels of beta-myosin. Work is currently under way to see if those mice show heart damage.

MiR-208 is identical in humans, mice and other animals, indicating that it has a basic and widespread function in controlling heart damage, Dr. Olson said.

The work suggests that if miR-208 can be tied up or eliminated by therapeutic treatment, it might be a way to treat heart disease, Dr. van Rooij said. "That would be golden, because even a tiny increase in beta-myosin heavy chain in humans has been proven to diminish heart function," she said.

Although miR-208 appears to damage the heart during stress, it may have beneficial functions for maintaining normal action of heart muscle cells, Dr. Olson said. So any therapeutic approach would probably need to target its harmful stress responses while leaving normal function alone, he said.

The work was supported by the National Institutes of Health and the Donald W. Reynolds Cardiovascular Clinical Research Center at UT Southwestern.

UT Southwestern Medical Center, one of the premier medical centers in the nation, integrates pioneering biomedical research with exceptional clinical care and education. Its nearly 1,500 full-time faculty members " including four active Nobel Prize winners, more than any other medical school in the world " are responsible for groundbreaking medical advances and are committed to translating science-driven research quickly to new clinical treatments. UT Southwestern physicians provide medical care in 40 specialties to nearly 92,000 hospitalized patients and oversee 1.7 million outpatient visits a year.