9-Jan-2014 11:25 AM EST, by National Institute of Biomedical Imaging and Bioengineering
favorite_border
NIBIB

NIBIB grantee Mehmet Toner of the Massachusetts General Hospital Cancer Center describes his work to create a chip that can sort circulating tumor cells (CTS), which break off tumors into the bloodstream and are responsible for metastasis, from other types of cells found in the blood. Detection of CTS can play an important role in early diagnosis, characterization of cancer subtypes, and treatment monitoring.

The microfluidic CTC-iChip system first sorts the various cells in a blood sample by size, allowing only CTCs and white blood cells to enter the inertial focusing chamber, which lines up those cells into a single file. A magnetic field then deflects cells previously labeled with tiny magnetic beads, isolating CTCs for further study. 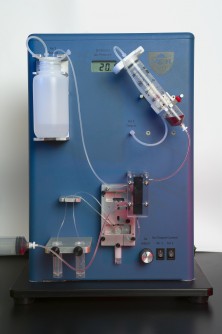 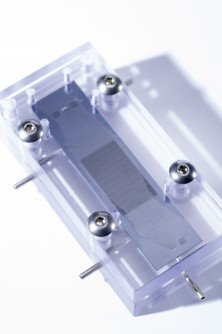 This part of the microfluidic CTC-iChip system sorts cells within a sample by size.

Newswise — The ability to detect circulating tumor cells (CTCs) as they travel through the blood can play an important role in early diagnosis, characterization of cancer subtypes, treatment monitoring and metastasis. By measuring a patient’s CTC levels over time, clinicians can quickly determine if a particular cancer treatment is working.

CTCs can also be tested to identify genetic mutations associated with a tumor. Many newer cancer medications are designed to target specific genetic mutations, so they work best for limited types and stages of cancer. CTCs can provide a quick method to help physicians choose the most appropriate targeted therapy for a particular patient. The potential benefits of CTCs abound. But with only one CTC for every one billion blood cells, finding any CTCs at all presents a significant challenge. Slalom Success: Single File Arrangement Eases CTC Sorting

With NIBIB funding, Mehmet Toner, Ph.D., and his research team at the Massachusetts General Hospital Cancer Center have been working to create a monitoring device centered on CTCs. The researchers’ previously developed devices could reliably sort CTCs from the other types of cells in whole blood—namely, red blood cells, white blood cells, and platelets. But the CTCs could not be easily retrieved for further testing. Seeking to improve their design, the researchers’ newest iteration of their “cancer lab on a chip,” the CTC-iChip, integrates several principles of magnetism and microfluidics to provide high-speed, automated sorting of the rare cells and can be applied to almost any type of cancer. After collecting a blood sample, the researchers mixed the sample with tiny, magnetic beads coated with specific antibodies. In some cases, the researchers used antibodies that seek out and attach to CTCs, and in other cases they used antibodies that bind to white blood cells. This magnetic labeling would come into play later in the microfluidic sorting process. In the first stage of the device, the whole blood (with magnetized cells) is sorted through an array of microposts that separates the various cells by size. Red blood cells, platelets, and other smaller particles are directed out of the device, while larger cells—including CTCs—flow into the next stage of the device. A series of S-shaped curves aligns the remaining cells into a single file, a process known as inertial focusing. The cells then pass through a slight magnetic field, quickly and easily separating magnetically labeled cells from unlabeled cells. While seemingly simple in concept, the inertial focusing mechanism is a significant advance in CTC isolation technology. Magnetic separation had been studied as a way to sort cells, but previous methods required relatively large magnetic beads or a large number of beads to be attached to cells. This often limited the yield or purity of the collected CTC sample. In Toner’s CTC-iChip, because the cells pass through the field one at a time, only a few small beads per cell are needed. Toner and colleagues tested their device using positive and negative depletion methods. Positive depletion identifies CTCs using antibodies that latch onto the protein EpCAM, commonly found on the surface of CTCs. Current commercially available CTC-sorting devices are based on positive depletion, and the CTC-iChip also successfully isolated magnetically labeled CTCs with this method. However, not all tumor cells produce EpCAM, and some studies suggest those that do may produce less EpCAM both in their earliest stages of growth and in later stages as they begin to metastasize; thus, the clinical usefulness of the positive depletion method is limited. Negative depletion, in contrast, sorts out CTCs by eliminating all other “known” cells first. By magnetically labeling white blood cells rather than CTCs, the researchers were able to isolate a vast array of unlabeled tumor cells using CTC-iChip. Negative depletion allows for the detection of CTCs without having to know what type of tumor they came from beforehand and regardless of whether they produce EpCAM. Thus, negative depletion methods may be able to identify a greater variety of tumors across a broader range of development than positive depletion. CTC Screening May Help Personalize Cancer Treatment

As described in the researchers’ April 2013 article published in Science Translational Medicine, the CTC-iChip was able to sort CTCs from whole blood:

• quicker than previously developed microfluidic devices, allowing larger blood samples to be processed in a short amount of time• more efficiently than other magnet-based sorting systems, reducing the amount of materials required and increasing the sensitivity of the device• more effectively in samples with few EpCAM-producing CTCs compared to other sorting methods• more effectively in samples known to not express EpCAM, such as triple negative breast cancer and melanoma.

By collecting CTCs in a way that allows them to be studied further, the CTC-iChip could also help clinicians identify important genetic differences between individual CTCs that may inform which targeted therapy is indicated. “You’re doing a liquid biopsy, in a sense. You find these cells in the blood and then look at their genomic makeup and decide what medication [the patient] should be put on,” said Toner. Because of intra-tumor heterogeneity, a biopsy needle may miss its mark. Compared to blood draws, tissue biopsies are also relatively invasive and complex, so they may not be done very often. Less frequent monitoring may miss important stages in disease progression. While not yet available clinically nor a complete substitute for current cancer care, technology like the CTC-iChip could someday make monitoring and treating the disease more personalized. According to Toner, “It will enable, in the long run, [a physician] to treat the right patient with the right drug at the right dose at the right time.” Reference

Caption: The microfluidic CTC-iChip system first sorts the various cells in a blood sample by size, allowing only CTCs and white blood cells to enter the inertial focusing chamber, which lines up those cells into a single file. A magnetic field then deflects cells previously labeled with tiny magnetic beads, isolating CTCs for further study. 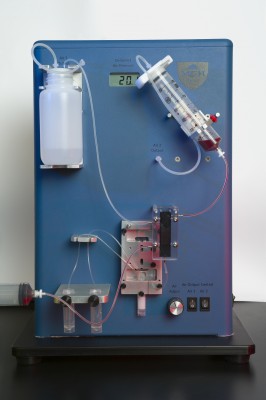 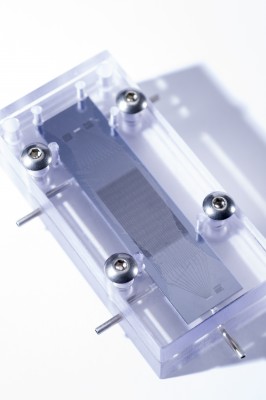 Caption: This part of the microfluidic CTC-iChip system sorts cells within a sample by size.