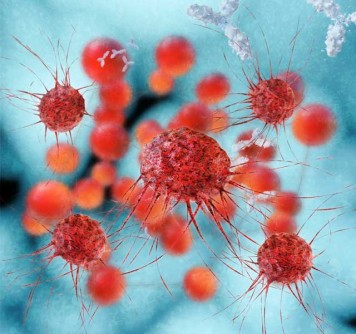 Newswise — Combining two checkpoint inhibitors, drugs that remove inhibitory signals and restore the immune system’s ability to fight cancer, may be effective in shrinking melanoma tumors or preventing their growth in some patients who previously received standard therapy, according to new research results from the Johns Hopkins Bloomberg~Kimmel Institute. (ASCO Abstract 9520).

Although currently-available immune checkpoint inhibitors have improved survival for some patients with melanoma or other types of cancer, Johns Hopkins study leader Evan J. Lipson, M.D., notes that these therapies are often ineffective. For example, in two recent studies, nivolumab (Opdivo), which targets an immune-inhibiting protein known as PD-1, led to two-year survival in only about 60 percent of patients with advanced melanoma.

In an effort to increase that percentage, Lipson and his colleagues tested whether adding a second, still experimental checkpoint inhibitor, which targets another immune-inhibiting protein known as LAG-3, could be effective in treating patients with advanced melanoma.

Lipson and his collaborators in the U.S. and Europe administered nivolumab and the anti-LAG-3 checkpoint inhibitor every two weeks to patients whose melanomas had progressed during or after previous treatment with at least one immune checkpoint therapy. Among 48 patients, 6 (13 percent) experienced a reduction in tumor size, while tumors from an additional 20 patients (42 percent) stabilized. Median duration of follow-up was 14 weeks.

These results, Lipson says, suggest that some patients for whom standard therapy is ineffective may benefit from this novel combination of immune checkpoint inhibitors, which remove molecular “brakes,” allowing the immune system to launch a more effective anticancer attack.

He adds that ongoing clinical trials at Johns Hopkins and elsewhere are currently testing this drug combination in patients with other types of cancer, or adding a third checkpoint inhibitor to the mix.

“Anti-LAG-3 has demonstrated its importance as a component of combination immune checkpoint inhibitor therapy. We continue to develop these novel regimens in order to safely and effectively unleash the tremendous power of the human immune system for as many cancer patients as possible,” Lipson says.

CANCER IMMUNOTHERAPY BEFORE — NOT AFTER — SURGERY COULD BE MORE EFFECTIVE

In a small clinical trial, nearly half of 21 patients with lung cancer pre-operatively given a drug that helps the immune system attack cancer responded so dramatically their tumors nearly or completely disappeared, Johns Hopkins scientists report. The findings, (ASCO Abstract 8508), suggest that the timing of immunotherapy may be critical to successful cancer treatment in people whose lung tumors are operable.

Administering standard chemotherapy before surgery, known as neoadjuvant therapy, has a long history in treating cancer, explains study leader Patrick Forde, M.B.B.Ch., assistant professor at the Johns Hopkins Bloomberg~Kimmel Institute. However, only about 20 percent of patients with non-small cell lung cancer, the most common type of this disease, seem to benefit from it.

Checkpoint inhibitors, drugs that remove inhibitory signals and restore the immune system’s cancer-fighting capability, have been approved to treat several cancers, including lung cancer, since 2014.

To test whether patients would do better if the immunotherapy were given before surgery, Forde and his colleagues at Johns Hopkins and Memorial Sloan Kettering Cancer Center gave two doses of the checkpoint inhibitor nivolumab (Opdivo) to 21 patients with non-small cell lung cancer over the four weeks leading up to their scheduled tumor removal surgeries.

Results showed that in nine patients, tumors had regressed more than 90 percent at the time of surgery. After surgery to remove residual tumors, further investigation showed that most patients’ tumors had an infiltration of immune cells, suggesting that the drug had prompted an aggressive immune attack against these cancers. An average of nine months after surgery, 17 (81 percent) of the 21 patients remained alive and recurrence-free.

Forde and his colleagues plan to study giving nivolumab in combination with other checkpoint inhibitors before surgery, and to test a longer pre-operative course of nivolumab. “It might be a matter of timing,” he says. “The immune system might need longer in some patients to fight off cancer cells.”

A drug frequently prescribed to men with prostate cancer to lower levels of testosterone that fuel cancer growth might also stimulate an immune attack on prostate tumors, a new study led by Johns Hopkins researchers shows. (ASCO Abstract 5077.) The findings, researchers say, could lead to new strategies for fighting prostate cancer, the second most common cancer in American men.

In 2005, experiments at Johns Hopkins in the laboratory of Charles Drake, M.D., Ph.D., showed that reducing testosterone in mouse models of prostate cancer prompts cancer-fighting immune cells known as CD8+ T cells to enter the prostate gland. This effect was even more pronounced when these animals also received a prostate cancer-specific vaccine, called GVAX, that encourages an immune response against this disease.

To test the concept in people, Emmanuel Antonarakis, M.D., associate professor of oncology and urology at the Johns Hopkins University School of Medicine and a member of the Kimmel Cancer Center, Drake, now at NewYork-Presbyterian/Columbia University Medical Center and Angelo DeMarzo, M.D., Ph.D., of Johns Hopkins, studied 48 prostate cancer patients in a presurgical clinical trial.

All participants had localized prostate cancer and were scheduled for surgery to remove their prostate glands. Four weeks before the surgeries, 13 men received GVAX along with cyclophosphamide, a standard chemotherapy drug that lowers the number of immune cells, called Tregs, which are known to inhibit immune responses. Two weeks later, these men received degerelix, a hormone drug that lowers testosterone levels, and then had their prostate glands removed two weeks later. A separate group of 15 patients received degarelix by itself, two weeks before surgery.

The remaining group of 20 men in the control group received no pre-surgical treatment prior to undergoing surgery to remove their prostate glands.

After each prostatectomy, the researchers examined the surgically removed tissue to determine whether the immunotherapy and hormone treatments had an immune-stimulating effect. They found that the CD8+ T-cell density was more than twice as high in prostate tissue from men who received any treatment before surgery compared with those who didn’t. However, the group that received both GVAX and cyclophosphamide in addition to degerelix had comparable CD8+ T-cell densities to those who received degerelix alone.

“What that tells us is that the most important factor in stimulating prostatic CD8+ T-cells wasn’t GVAX or cyclophosphamide but the degerelix itself,” Antonarakis says.

On the down side, the immune-stimulating effect wasn’t isolated to CD8+ T cells; the levels of Tregs also rose as well in both treatment groups, Antonarakis adds, which could dampen the CD8+ T-cells’ cancer-fighting effects. To address this issue, Antonarakis says, ongoing clinical trials at Johns Hopkins are testing the use of a combination of degerelix with either prostate cryotherapy, which applies freezing temperatures to tumors and releases immune-stimulating molecules from the prostate into the bloodstream; or with immunotherapy drugs known as checkpoint inhibitors such as pembrolizumab.

In a look-back study of patients with head and neck cancers enrolled in a clinical trial of the immunotherapy drug pembrolizumab (Keytruda), Johns Hopkins physicians have found preliminary evidence that cancers with abundant mutations and a gene signature specific for immune system T-cell inflammation may respond better to immunotherapy drugs that block a protein called PD-1.

Pembrolizumab is FDA-approved for five cancer types, including head and neck cancer, and approximately 18 percent of patients with the disease respond to the drug, Johns Hopkins researchers say. However, physicians currently have no way to tell which patients with advanced cancers may respond.

Ranee Mehra, M.D., associate professor of oncology at the Johns Hopkins Kimmel Cancer Center, and her colleagues analyzed tumor tissue samples from 107 patients with head and neck cancer who received pembrolizumab. (ASCO Abstract 6009). Using genomic sequencing, the researchers looked at the abundance of mutations in the patients’ cancers and the expression of genes related to T-cell inflammation. The researchers also determined whether patients were positive or negative for human papillomavirus (HPV), which is linked to head and neck cancer. An increased mutation burden can produce large amounts of abnormal, foreign-looking proteins and is thought to make the malignant cells more visible to the immune system and susceptible to immunotherapy.

Mehra says that the small number of responders is a limitation of the study, but she says there seems to be a trend in better response to pembrolizumab among those with high mutation burden and T-cell inflammation gene expression.

“Our study suggests tumor genetic biomarkers that need further evaluation in future clinical trials of immunotherapy,” says Mehra. “Patients who respond to these drugs tend to respond for a long time, so it’s important to predict who may be more likely to respond.”