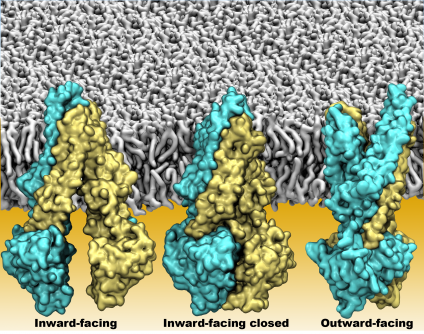 Newswise — In the fight against cancer, cancer cells often find ways to fight back. One means is by stocking the cell membrane with proteins that pump foreign substances—including anticancer drugs—out of the cell. This trait can result in multidrug resistance that undermines the effectiveness of cancer treatment.

To combat this defense mechanism, scientists are turning to supercomputers and molecular dynamics to better understand the function of a membrane transport protein called P-glycoprotein, or Pgp. In healthy cells, Pgp acts as the cell’s vacuum cleaner, removing unwanted or toxic substances. But to treat cancer, doctors sometimes need to temporarily pull the plug on these molecular pumps. The task requires developing targeted drugs based on a thorough understanding of Pgp’s makeup and mechanics.

Recently, a team led by computational biophysicist Emad Tajkhorshid from the University of Illinois at Urbana-Champaign (UIUC) uncovered new details about Pgp that could help the drug discovery community. Using the Cray XK7 Titan supercomputer, a 27-petaflop system housed at the Oak Ridge Leadership Computing Facility(OLCF), a US Department of Energy (DOE) Office of Science User Facility at DOE’s Oak Ridge National Laboratory, the team produced the first experimentally verified all-atom look at a mammalian Pgp in its outward-facing state (open to the outside of the cell) within a biological membrane. The simulation work also produced clues related to the structural integrity of the protein. The team’s results were published in Nature in March 2017.

“There are many challenges to imaging and simulating a transporter like Pgp, but by using a unique method that combines experimental data with molecular dynamics and computing, our team was able to discover new information about this key cellular component,” said Sundarapandian Thangapandian, a team member and postdoctoral researcher at UIUC. “These findings could aid in drug discovery, where researchers are looking for better Pgp inhibitors, drugs that block transporter function and make it easier for anticancer drugs to do their job.”

Like any good vacuum cleaner, Pgp isn’t picky about the substances it attracts and expels from the cell. The list includes a large number of drug molecules with hydrophobic (water-repelling) and hydrophilic (water-attracting) groups in their chemical structure. In addition to cancer drugs, the list includes cardiovascular drugs, antibiotics, and steroid hormones.

Wedged within the cell’s lipid membrane, the transporter’s broad selectivity is a product of its design. Pgp consists of two complementary subunits, with each subunit containing a transmembrane domain and a nucleotide-binding domain. When a foreign molecule, or substrate, binds to Pgp’s transmembrane domain, a series of conformational changes is triggered. These changes allow adenosine triphosphate (ATP), the universal energy currency of the cell, to attach to Pgp’s nucleotide-binding domains and power the transmembrane domains’ inversion. The action, analogous to a complex gate swinging open, causes the protein to release the substrate out of the cell and Pgp to return to its closed-gate, unbound configuration.

To gain a more comprehensive picture of this process, Tajkhorshid’s team relied on detailed molecular measurements captured via a spectroscopy method called double electron–electron resonance by a Vanderbilt University team led by Hassane Mchaourab, a professor of molecular physiology and biophysics. These experiments provided precise information that allowed the team to construct its model based on data from a mammalian Pgp both in its inward-facing state (open to the inside of the cell) and in its outward-facing state.

“Because of the protein’s high degree of dynamics, no one had ever been able to experimentally provide atomic-level structural details on the outward-facing state of the protein,” Thangapandian said.

With the newly minted model, Tajkhorshid’s team, in effect, possessed a lock in need of a key. That key came in the form of the OLCF’s Titan, to which the team gained access through a 100-million core-hour allocation awarded through DOE’s INCITE (Innovative and Novel Computational Impact on Theory and Experiment) program.

Using the molecular dynamics code NAMD, the UIUC team explored Pgp’s mechanics by dividing the protein into five distinct simulation sets. Run on Titan, the setup allowed the team to scrutinize Pgp’s components in isolation before bringing them all together. Thangapandian, who managed the simulations, compiled 300 nanoseconds of simulation time for each subunit—aggregating 1.5 microseconds of the Pgp model in total.

The substantial sum of simulation data unlocked a trove of new insights, including the ATP-powered mechanism Pgp uses to alter substrate access from inside the cell to outside the cell. This so-called alternating access mechanism consists of a “two-stroke” sequence that closes and opens the protein. “This means one ATP is needed to close the inner side of the protein, and a second is needed to open the outer side,” Thangapandian said.

In the midst of this energy transfer, the team documented 60 interactions involving different atoms. The new mechanics play an important role in bringing together Pgp’s nucleotide-binding domains into a single chemical structure, a process known as dimerization.

With Pgp’s two end states now well characterized, Tajkhorshid’s team is shifting its attention to the action in between, work that could lend additional insights to biologists and medicinal chemists. Capturing this level of detail requires additional computational sampling of the process, a goal that is now being pursued on the Blue Waters supercomputer at the National Center for Supercomputing Applications located at UIUC.

“We want to give researchers focused on Pgp a set of stable intermediate states to target as well,” Thangapandian said. “That would really improve the effectiveness of the drug discovery process.”

This research was funded by the National Institutes of Health. UT-Battelle manages ORNL for the DOE Office of Science. The Office of Science is the single largest supporter of basic research in the physical sciences in the United States and is working to address some of the most pressing challenges of our time. For more information, please visit http://science.energy.gov.