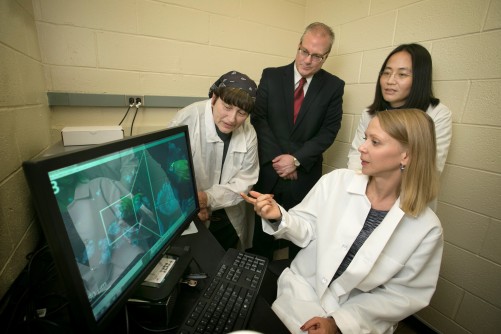 Newswise — STONY BROOK, N.Y., April 26, 2016 – When human cells are exposed to titanium dioxide without the presence of UV light from the sun, the risk for bacterial infection more than doubles. This finding by a Stony Brook University-led research team, published early online in the Journal of Nanobiotechnology, raises concerns about exposure to titanium dioxide, a nanoparticle commonly used in millions of products worldwide ranging from cosmetics to toothpaste, gum, food coloring, and medicines.

Because some four million tons of titanium dioxide particles are produced worldwide, human exposure to them is almost certain during a lifetime. In combination with UV light, the nanoparticles exhibit prophylactic activity against bacteria and therefore are studied for anti-bacterial applications. Yet, in the paper titled “Exposure to TiO2 nanopartices increases Staphylococcus aureus infection of HeLa cells,” the researchers showed that in the absence of these powerful rays, bacteria thrive.

“We discovered an almost ‘perfect storm’ generated by titanium dioxide nanoparticles against the immune system when they are not impacted by UV light,” said Miriam Rafailovich, PhD, Distinguished Professor in the Department of Materials Science and Engineering (MSE) within the College of Engineering & Applied Sciences at Stony Brook University and a co-author on the paper. “This should raise a red flag regarding exposure risks related to products that include titanium dioxide in the absence of UV light.”

The researchers, headed by Dr. Tatsiana Mironava of the Department of Materials Science and Engineering, exposed some HeLa cells, a human cell line used in research, to titanium dioxide. Together with Yan Xu of MSE and Dr. Stephen Walker, a microbiologist in the Stony Brook School of Dental Medicine, they then exposed the cells to Staphylococcus aureus, a pathogen that causes a diverse range of human infections worldwide. They found that the titanium dioxide-exposed cells had 250 percent to 350 percent more bacteria per cell than HeLa cells not exposed to the nanoparticles. Additionally, bacterial-killing macrophages exposed to titanium dioxide ingested 40 percent fewer bacteria compared to other cells, further increasing the risk of infection.

The authors concluded that these factors, in combination, ”raise serious concerns regarding the impact of exposure to titanium dioxide nanoparticles on the ability of organisms to resist bacterial infection.”

The research was supported, in part, by the National Science Foundation.