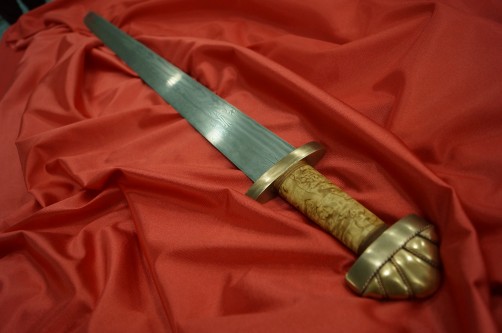 The winning sword from the 2017 TMS Bladesmithing Competition was produced in the style of a Norwegian langseax. 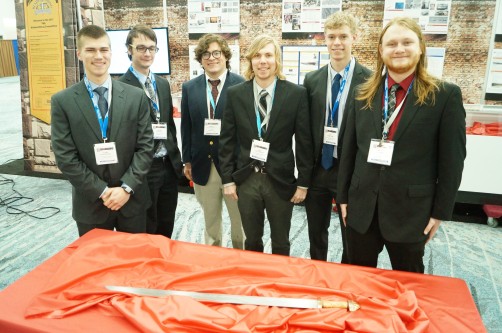 The South Dakota School of Mines and Technology team poses with their winning blade at the TMS 2017 Annual Meeting & Exhibition.

Newswise — March 1, 2017—San Diego, CA (USA): A blade forged from a meteorite, a mythical Elven shortsword made real, and a reproduction of a Viking battle axe were among the 26 entries that competed in the 2017 TMS Bladesmithing Competition, held as part of the TMS 2017 Annual Meeting & Exhibition in San Diego, California, February 26–March 2.

It was a sword produced in the style of a Norwegian langseax, however, that took home the inaugural TMS Wadsworth-Sherby Bladesmithing Grand Prize when the winners of the competition were announced on February 28. The sword was forged by a student team representing the South Dakota School of Mines, with steel smelted in a historic manner with local materials gathered from the Black Hills.

Now in its second year, the TMS Bladesmithing Competition challenges university teams across the globe to produce a knife or sword blade formed by hand hammering or trip hammer forging. The teams are also required to prepare a technical report on the science behind the creation of their entry, as well as a technical poster and a video. The entries are rigorously judged on technical excellence, safety, and aesthetics by a panel of scientists and engineers in the minerals, metals, and materials professions.

The TMS Wadsworth-Sherby Bladesmithing Grand Prize was established by Jeffrey Wadsworth, President and Chief Executive Officer of Battelle. The Prize consists of a $2,000 cash award for the team, a medal, and a commemorative volume of Wadsworth-Sherby Collected Works on Damascus Steels & Related Topics. Wadsworth presented the Grand Prize during the Bladesmithing Award ceremony, noting that he had intended for the award to honor his mentor and friend, Oleg D. Sherby, who had developed a seminal body of research with Wadsworth on Damascus steel and other ancient weapons.

Visit the TMS Bladesmithing Competition website for further information on the contest background and rules, as well as a list of the 2017 contestants. All student videos are also available for viewing.

ABOUT TMS The Minerals, Metals & Materials Society (TMS) is a member-driven international professional society dedicated to fostering the exchange of learning and ideas across the entire range of materials science and engineering, from minerals processing and primary metals production, to basic research and the advanced applications of materials. Included among its nearly 13,000 professional and student members are metallurgical and materials engineers, scientists, researchers, educators, and administrators from more than 70 countries on six continents. For more information on TMS, visit www.tms.org. 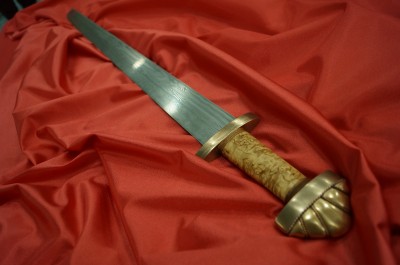 Caption: The winning sword from the 2017 TMS Bladesmithing Competition was produced in the style of a Norwegian langseax. 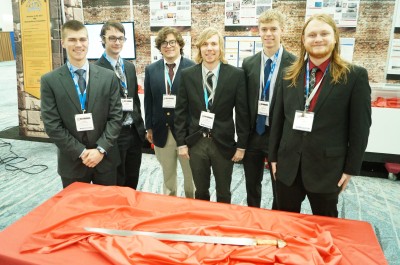 Caption: The South Dakota School of Mines and Technology team poses with their winning blade at the TMS 2017 Annual Meeting & Exhibition.