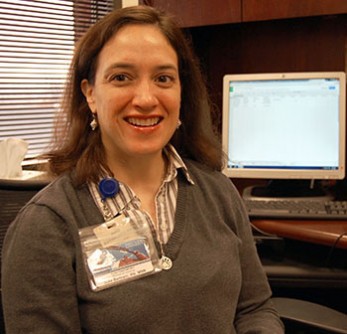 Julie Bertram is an instructor at Saint Louis University School of Nursing.

“Adding a mental health nurse to the treatment team would be ideal. He or she could bring a much-needed medical perspective to caring for teens in foster care who have psychiatric disorders. Child welfare workers and social workers don’t have the specific training they need to track health problems,” said Julie Bertram, MSN, who also is lead author of the article.

“In addition, there is a national shortage of child psychiatrists, and nurses could be a bridge to quality care because they’re able to help social workers, case managers, foster families and patients navigate the system. If we invest the time and effort into education and holistically managing the health of troubled teens, it likely would be worth it in the long-run.”

Bertram’s work, which appeared in the December issue of the Archives of Psychiatric Nursing, described her role on a treatment team that studied foster youth and chronicled reactions to her involvement from case workers and teens. J. Curtis McMillen, Ph.D., professor at the University of Chicago School of Social Service Administration, was the principal investigator of the study and hired Bertram as a nurse consultant.

Mental illness is a major problem for children in foster care. Three-quarters have suffered serious traumas such as sexual abuse or mistreatment. Typically one or both parents have histories of mental illness and substance abuse.

Not surprisingly, teens in foster care receive mental health services at a very high rate. Their use of medications for psychiatric problems is up to five times the rate of young people who are not in foster care, and many take multiple different drugs.

They frequently change psychiatrists as they move between homes, some accumulating conflicting diagnoses and medicines. They leave foster care, ill-equipped to survive in the adult world, without fully understanding their mental health issues and treatment options, Bertram says.

“High rates of psychotropic medication use, polypharmacy and problems in continuity of care have raised alarms about whether youth in the foster care system may be receiving inappropriate treatments for the symptoms they present,” Bertram says. “The strikingly high rate of medication use may be just the tip of the iceberg when it comes to concerns about quality of care within the child welfare system.”

For the qualitative research study, Bertram served on the care team of eight adolescents with histories of hospitalization for psychiatric problems. Considered high needs youth, these teens took multiple psychotropic medications and lived and attended school in residential care foster facilities, which essentially are locked group homes, when the study began. They were transitioned out of the residential settings to live with foster families who received special training.

Bertram served as the nurse consultant on the treatment team – synthesizing medical information, sharing pertinent details at weekly team meetings and intervening in times of crisis and when routine medical questions arose. She also met with teens and their foster parents, establishing a rapport and trust and teaching them how to have a voice in decisions about their medical care.

Bertram began her work by completing a comprehensive psychiatric assessment. She reviewed past medical records and charts and interviewed case managers, foster parents, psychiatrists and teens to clarify mental health issues, such as diagnoses and what medications were prescribed. She then organized the medical profile to create a comprehensive mental health summary.

Bertram said the teens each had taken an average of 13 psychotropic medications – some as many as 21-- and had an average of eight different diagnoses for psychiatric problems.

“I was able to purge old, outdated or inaccurate diagnoses across cases, which typically reduced the number of diagnoses to an average of two problems,” Bertram said. “I also reviewed the medication profiles and recommended changes for two teens – one based on side effects and another because the teen was taking greater than maximum recommended doses of medications and multiple medicines without clear benefits.”

Case workers described the management of medical information as “ridiculously difficult” and the newly reorganized report as very helpful. One noted that when her patient was hospitalized, she shared the comprehensive document with hospital nurses and doctors so they could deliver better care.

The teens said that the reports answered questions they had about their diagnoses and gave them ammunition to advocate for their own health needs.

“Psychiatric nurses bring a medical and holistic perspective to the treatment team, could navigate medical and co-occurring illnesses, and could support case managers and social workers in the system,” Bertram says.

The research was funded by the National Institute of Mental Health.