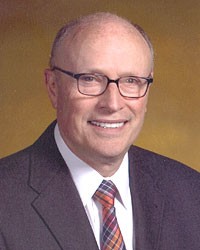 Dr. Darrell Campbell, emeritus professor of surgery at the University of Michigan and director of the Michigan Surgical Quality Collaborative, helped lead the development of a statewide effort to improve the quality and safety of surgical care in Michigan.

Newswise — ANN ARBOR, Mich. – Half the dollars spent on health care in America have something to do with a surgical procedure – including post-surgery care to fix problems that could have been prevented.

So any chance to make surgery safer, and avoid complications, could have a major impact on both the nation’s health and bottom line.

In a new paper in JAMA Surgery, a team from the University of Michigan lays out the case for a model that could do just that: the one that surgeons and nurses in 72 hospitals across Michigan have quietly built over the last decade.

Fueled by funding from the state’s largest insurer, Blue Cross Blue Shield of Michigan, and driven by a pool of detailed data on tens of thousands of operations of all kinds, it’s called the Value Partnership model.

Four other states have borrowed it to build their own models, with insurer money and a physician-driven approach.

But for the model to spread further and faster, the authors of the new article call for the federal government to get involved. A partnership between the Centers for Medicare and Medicaid Services and private insurers could give the VP approach a needed boost and help providers in more regions and states make care better and more cost-effective.

Darrell A. Campbell, Jr., M.D., the U-M surgeon and emeritus professor who co-authored the new piece and has helped lead the Michigan effort, says the VP approach could provide the kind of evidence-based, public-private innovation model that CMS has said it’s looking for.

“This effort, designed by the people on the front lines of surgical care, has succeeded because it’s collaborative, non-punitive, data-driven and supported by a payor that has supported the vision of using shared data to improve care in ways that make sense to the care team,” says Campbell.

“We believe it could be a model for the nation, but it will take partnership on a federal level to incentivize more payors and providers to start new efforts in their areas.”

For instance, he and and co-author Greta Krapohl, R.N., Ph.D., say CMS could pay physicians more under the MACRA payment model if they take part in a VP-like effort in their area. And, it could offer tax credits or other incentives to private insurers if they fund a VP effort in their state.

Campbell, Krapohl and their co-author, U-M surgeon Michael Englesbe, M.D., cite a wide range of results achieved in Michigan so far and published in the medical literature. All come from the various Collaborative Quality Initiatives that have sprung up under the VP model, including the Michigan Surgical Quality Collaborative led by the three authors of the new article.

They describe how the VP approach, which started with general surgeons in 2005, has spread to a range of procedure-based disciplines such as obstetrics, bariatrics, orthopedics, breast surgery and interventional cardiology. Each has its own CQI to collect, pool and share data on procedures in that specialty. Even non-surgical disciplines have adopted the approach, including emergency medicine and hospital-based general medicine.

At the root of the approach is a network of participating hospitals that gather and analyze of a wide range of data from every operation, benchmark surgical outcomes with other similar hospitals in the region.

Coaching the lower-performing outliers can improve care, and analysis of high-performers can identify best practices that can be shared with others, or even be rolled out as part of “bundles” of tactics that all should use.

Recently, the Michigan VP team welcomed people from 12 other states to a conference to learn more about the VP approach, and launched a new nationally focused initiative with funding from the U-M Medical School’s Department of Learning Health Sciences. Called the Center of Excellence for Collaborative Quality Improvement, to help spread the concept and serve as a nexus for information and tools to help others adopt the approach

“We need to think of ways to encourage the spread of this model, and to integrate it into the quality and value focus that is emerging in healthcare,” says Campbell. “This also means increasing awareness of what the Michigan model has achieved, by harnessing the best ideas of those who provide care, building trust among participants, and spreading the approaches that yield the best results.”

The authors of the paper are members of the U-M Institute for Healthcare Policy and Innovation. Most of the Value Partnership Collaborative Quality Initiatives funded by BCBSM are based at IHPI: http://ihpi.umich.edu/our-experts/ihpi-led-collaborative-quality-initiatives.