To Salt or Not to Salt, That is the Question 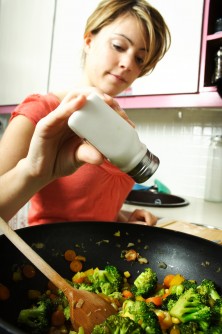 If you are a person who is sensitive to salt consumption, a reduction is definitely needed or perhaps even a switch to a natural alternative like sea salt might help. But beware of hidden salt.

Newswise — A new eight year long European study concludes that salt consumption is not dangerous and may in fact be beneficial. This is certainly contrary to advice from American Medical Association, American Heart Association and the Center for Disease Control and Prevention, which says higher sodium consumption can increase the risk of heart disease. It’s not unusual to see differing opinions, but what are we ordinary folks to make of the controversy?

“The optimal level of salt in our diets has been a controversial subject for at least 20 years,” say co-authors Dian Griesel, Ph.D. and Tom Griesel of the new book, TurboCharged: Accelerate Your Fat Burning Metabolism, Get Lean Fast and Leave Diet and Exercise Rules in the Dust (BSH, 2011). The problem they say generally boils down to the effect (or lack thereof) salt has on blood pressure.

“There is no disagreement that high blood pressure (even moderately high) is a risk factor for heart disease and stroke,” say the Griesels. “However, salt consumption does not seem to have the same effect on everyone. In addition, there is usually no distinction on the type of salt used. There are many naturally harvested salts that also contain many trace minerals, which undoubtedly have an effect. Medical literature on salt consumption (like many other things) is inconsistent.”

The main take away from all this is the importance of knowing what your blood pressure is and making an effort to do whatever is necessary to have consistent readings in the healthy range of 120/70 or less. If you are a person who is sensitive to salt consumption, a reduction is definitely needed or perhaps even a switch to a natural alternative like sea salt might help. But beware of hidden salt. The biggest source of salt in our diet is the refined and processed foods purchased at the grocery store along with food served in restaurants, particularly fast-food which amounts to about 75% of salt consumption for the average person.

For more information about the book and authors Dian and Tom Griesel, please visit: www.turbocharged.us.com