To Speed Up Magma, Add Water

Water dragged into Earth’s interior helps melt rock, but near the Tonga trench there’s the least magma where there’s the most water. What is going on?

The team aboard the research vessel Kilo Moana retrieves an ocean-bottom seismograph that has floated to the surface after receiving a command to release the heavy metal plate that holds it to the bottom. The data from these seismographs was used to construct images of the mantle featured in the online Feb. 2 issue of Nature.

The Lau Basin, in the South Pacific (top), is a V-shaped basin created by the subduction of the Pacific Plate at the Tonga Trench (the purple line in the central image). A seismic image (bottom) of part of the basin at a depth of 50 kilometers (31 miles) shows magma pooling to the north beneath areas that are unrifted (dark red) and provide no egress but little magma (pale yellow) along the southern end of the Eastern Lau Spreading Center, or ELSC, even though this area is intensely volcanic. 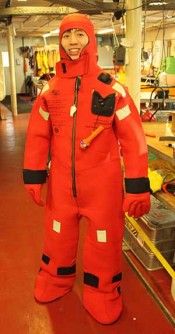 S. Shawn Wei, first author of the Nature paper, kitted up for an emergency drill aboard the research vessel Melville during a campaign to drop ocean-bottom seismographs across the Mariana Trench, also known as the Challenger Deep.

Newswise — It was a bit like making a CT scan of a patient’s head and finding he had very little brain or making a PET scan of a dead fish and seeing hot spots of oxygen consumption. Scientists making seismic images of the mantle beneath a famous geological site saw the least magma where they expected to see the most.

What was going on? Was it an artifact of their technique or the revelation of something real but not yet understood?

In the online Feb. 2 issue of Nature, a team of scientists, led by S. Shawn Wei and Douglas Wiens of Washington University in St. Louis, published a three-dimensional seismic image of mantle beneath the Lau Basin in the South Pacific that had an intriguing anomaly.

The basin is an ideal location for studying the role of water in volcanic and tectonic processes. Because the basin is widening, it has many spreading centers, or deep cracks through which magma rises to the surface. And because it is shaped like a V, these centers lie at varying distances from the Tonga Trench, where water is copiously injected into Earth’s interior.

The scientists knew that the chemistry of the magma erupted through the spreading centers varies with their distance from the trench. Those to the north, toward the opening of the V, erupt a drier magma than those to the south, near the point of the V, where the magma has more water and chemical elements associated with water. Because water lowers the melting temperature of rock, spreading centers to the north also produce less magma than those to the south.

Before they constructed images from their seismic data, the scientists expected the pattern in the mantle to match that on the surface. In particular they expected to find molten rock pooled to the south, where the water content in the mantle is highest. Instead the seismic images indicated less melt in the south than in the north.

They were flummoxed. After considerable debate, they concluded they were seeing something real. Water, they suggest, increases melting but makes the melt less viscous, speeding its transport to the surface, rather like mixing water with honey makes it flow quicker. Because water-laden magma flushes out so quickly, there is less of it in the mantle at any given moment even though more is being produced over time.

The finding brings scientists one step closer to understanding how the Earth’s water cycle affects nearly everything on the planet — not just the clouds and rivers above the surface, but also processes that take place in silence and darkness in the plutonic depths.

Stretched thin and rippingThe Lau Basin, which lies between the island archipelagos of Tonga and Fiji, was created by the collision of the giant slab of the Pacific Ocean’s floor colliding with the Australian plate. The older, thus colder and denser, Pacific plate nosed under the Australian plate and sank into the depths along the Tonga Trench, also called the Horizon Deep.

Water given off by the wet slab lowered the melting point of the rock above, causing magma to erupt and form a volcanic arc, called the Tonga-Kermadec ridge.

About 4 to 6 million years ago, the Pacific slab started to pull away from the Australian slab, dragging material from the mantle beneath it. The Australian plate’s margin stretched, splitting the ridge, creating the basin and, over time, rifiting the floor of the basin. Magma upwelling through these rifts created new spreading centers.

“Leave it long enough,” said Wei, a McDonnell Scholar and doctoral student in earth and planetary science in Arts & Sciences, “and the basin will probably form a new ocean.”

“The Tonga subduction zone is famous in seismology,” Wiens said, “because two-thirds of the world’s deep earthquakes happen there and subduction is faster there than anywhere else in the world. In the northern part of this area the slab is sinking at about 24 centimeters (9 inches) a year, or nearly a meter every four years. That’s four times faster than the San Andreas fault is moving.”

The magma that wasn't thereThe images of the mantle published in Nature are based on the rumblings of 200 earthquakes picked up by 50 ocean-bottom seismographs deployed in the Lau Basin in 2009 and 2010 and 17 seismographs installed on the islands of Tonga and Fiji.

The 2009-2010 campaign, led by Wiens, PhD, professor of earth and planetary sciences in Arts & Sciences, was one the largest long-term deployments of ocean-bottom seismographs ever undertaken (see video above).

When the scientists looked carefully at the southern part of the images created from their seismograph recordings, they were mystified by what they saw — or rather didn’t see. In their color-coded images, the area along the southern end of the spreading center in the tip of the basin, called the ELSC, should have been deep red.

Instead it registered pale yellow or green, as though it held little magma. “It was the reverse of our expectation,” Wei said.

To make these images, the scientists calculated the departure of the seismic velocities from reference values, Wei explained. “If the velocities are much lower than normal we attribute that to the presence of molten rock,” he said. “The lower the velocity, the more magma.”

Because water lowers melting temperatures, the scientists expected to see the lowest velocities and the most magma to the south, where the water content is highest.

Instead the velocities in the north were much lower than those in the south, signaling less magma in the south. This was all the more mystifying because the southern ELSC is intensely volcanic.

If the volcanoes were spewing magma, why wasn’t it showing up in the seismic images?

After considerable debate, the scientists concluded that water from the slab must make melt transport more efficient as well as lowering melting temperatures.

“Where there’s very little water, the system is not moving the magma through very efficiently,” Wiens said. “So where we see a lot of magma pooled in the north, that doesn’t necessarily mean there’s a lot of melting there, just that the movement of the magma is slow.”

“Conversely, where there’s water, the magma is quickly and efficiently transported to the surface. So where we see little magma in the south, there is just as much melting going on, but the magma is moving through so fast that at any one moment we see less of it in the rock,” Wiens said.

“The only way to explain the distribution of magma is to take account of the effect of water on the transport of magma,” Wei said. “We think water makes the magma significantly less viscous, and that’s why transport is more efficient.”

“This is the first study to highlight the effect of water on the efficiency of magma extraction and the speed of magma transport,” Wiens said.

Wei plans to continue following the water. “A recent paper in Nature described evidence that water is carried down to 410 kilometers (250 miles). I’d like to look deeper,” he said.

Caption: The Lau Basin, in the South Pacific (top), is a V-shaped basin created by the subduction of the Pacific Plate at the Tonga Trench (the purple line in the central image). A seismic image (bottom) of part of the basin at a depth of 50 kilometers (31 miles) shows magma pooling to the north beneath areas that are unrifted (dark red) and provide no egress but little magma (pale yellow) along the southern end of the Eastern Lau Spreading Center, or ELSC, even though this area is intensely volcanic. 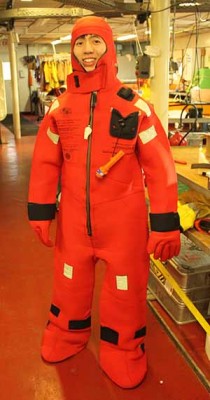 Caption: S. Shawn Wei, first author of the Nature paper, kitted up for an emergency drill aboard the research vessel Melville during a campaign to drop ocean-bottom seismographs across the Mariana Trench, also known as the Challenger Deep.