To wipe childhood cancer off the map, scientists must chart its genomic landscape

Scientists from St. Jude Children’s Research Hospital sequenced the most childhood cancer samples from a single cancer type ever in a landmark study. 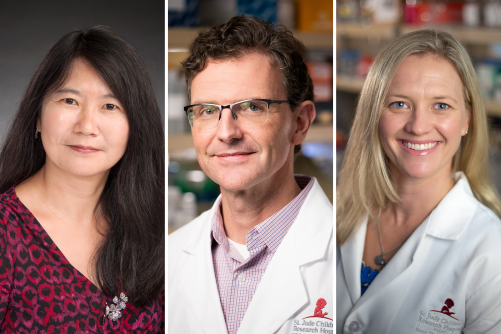 Newswise — (MEMPHIS, Tennessee – Sept. 1, 2022) Scientists have created a roadmap of the genetic mutations present in the most common childhood cancer, acute lymphoblastic leukemia (ALL).  The St. Jude Children’s Research Hospital study is the first to supply a comprehensive view of the genomics of all subtypes of ALL. The work serves as a foundational guide for physicians and scientists to understand disease development and improve treatment outcomes. The research was published today in Nature Genetics.

“In this study, we were able to comprehensively define the number and type of recurrently altered genes that are found in childhood ALL,” said co-corresponding author Charles Mullighan, Ph.D., M.B.B.S., St. Jude Department of Pathology. “Because of the scale of the study, we could identify many newly implicated genes that have not been reported in leukemia or cancer at all, and to show that they fall into several new cellular pathways.”

Creating A Roadmap to Understand ALL

Due to the work of scientists and clinicians at institutions such as St. Jude, most children with ALL will survive. However, a fraction of those patients do not respond well to therapy. Scientists believed that differences in these patients’ cancer genetics could predict treatment responses. For example, the St. Jude team found that in leukemia that is normally considered low risk, a single specific genetic rearrangement was associated with a significantly increased risk of relapse.

If researchers understand the impact of genetic differences on cancer outcomes, then in the future physicians can sequence patients’ cancer before starting treatment. This will enable physicians to personalize treatments to individual patients based on their genetics and likelihood of responding to different anti-cancer therapies.

But before bringing personalized therapies into the clinic, scientists need to map the different mutations that drive the development of leukemia across the landscape of diverse disease subtypes.

“The findings from this study clearly define many different genetic subtypes of ALL,” said co-corresponding author Stephen P. Hunger, M.D., Children’s Hospital of Philadelphia. “Several of these genetic subtypes were previously unknown, and we also identified common secondary and tertiary mutations that lead to development of ALL. We were able to identify new pathways to target with precision medicine treatments to potentially improve cure rates and reduce short- and long-term adverse effects of treatment.”

The research was unique because it included 2,574 pediatric ALL patient samples, the largest such cohort ever published. As a comparison, earlier studies have typically studied hundreds of samples, or fewer. St. Jude investigators collaborated with the Children’s Oncology Group to collect samples over more than a decade.

The samples were subjected to a combination of whole genome, whole exome or transcriptome sequencing. The researchers compared the sequences to find patterns in the mutations. These patterns can serve as roadmaps to understand how the cancer develops and how it may respond to treatment.

“The study demonstrates the power of the data,” said co-corresponding author Jinghui Zhang, Ph.D., St. Jude Department of Computational Biology chair. “If you don't have a sufficient number of patient samples, you lack the statistical power to find drivers present at a low prevalence. Once we had the power, we found a subgroup of new drivers involved in ALL development.”

“The new drivers included a type of protein modification, which was really exciting, because we have never anticipated in the past that this group of proteins will be involved in disease initiation for leukemia,” she said.

A Series of Intriguing Results

The researchers, led by co-first-authors Sam Brady, Ph.D., and Kathryn Roberts, Ph.D., of St. Jude, looked for new driver mutations. On average, the pediatric cancer samples had four mutations that drove development of ALL.

Overall, the group identified 376 significantly mutated genes that potentially drive cancer development. Seventy of the genes have never been implicated in ALL. Some of the unexpected potential driver mutations are in genes involved with cellular processes such as ubiquitination, SUMOylation or non-coding cis-regulatory regions.

The researchers also found differences in the mutations present in subtypes of ALL, which may affect clinical care. For example, two of these groups involved specific genetic rearrangements that differed by CEBPA/FLT3 or NFATC4 gene expression. This observation may have clinical implications, as new FLT3 inhibitors are in clinical trials, suggesting the CEBPA/FLT3 ALL subtypes may be sensitive to such therapies, but the other subgroup may not be.

ALL Cancer Development Starts with A Chromosomal “Big Bang”

The researchers’ work revealed the sequence of mutation events in many ALL cases, with potential implications for treatment. In hyperdiploid B-cell ALL (B-ALL), cancer cells have at least five more chromosomes than normal (46 in humans). A long-standing question has been the relative timing of chromosomal gains, and other mutations, in the development of hyperdiploid ALL. Understanding this process would provide important insights into how leukemia develops.

The researchers traced the order of events leading to hyperdiploid ALL using computational modeling of the sequence of mutations and chromosomal gain data. This showed that in most hyperdiploid B-ALL cases, the chromosomal gains appear to happen early and all at once, a chromosomal “big bang.” Then, the precancerous cells gain more mutations, in part due to ultraviolet (UV) light induced DNA damage. The finding shows UV damage contributes to the development of ALL, a previously controversial notion.

Other scientists can access the data from the paper on the St. Jude Cloud, within the pediatric cancer data portal (PeCan) database.

This study is dedicated to co-author Daniela S. Gerhard, Ph.D., former director of the Office of Cancer Genomics at the National Cancer Institute, who worked tirelessly to gain the support needed for this study and died in June 2021.