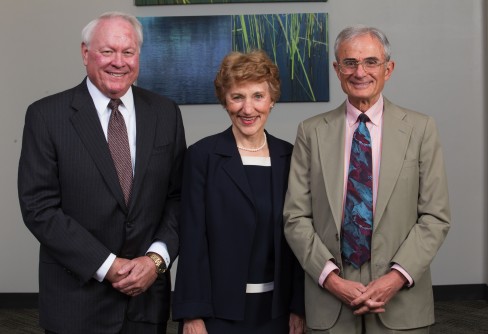 Levin is a professor and Chairman Emeritus in the Department of Radiology at Jefferson Medical College and Thomas Jefferson University Hospital in Philadelphia. He has held faculty appointments at the New York Hospital-Cornell Medical Center in New York, Downstate Medical Center in Brooklyn and Harvard Medical School. While at Harvard, he was head of cardiovascular/interventional radiology at the Brigham and Women’s Hospital in Boston. Levin also has served as chair of the Council on Cardiovascular Radiology of the American Heart Association and president of the Society of Chairmen of Academic Radiology Departments. He has received six gold medals from societies such as the American College of Radiology (ACR), the American Roentgen Ray Society (ARRS) and the Radiological Society of North America. Before pursuing a career in medicine, he was a jet fighter pilot in the U.S. Air Force. Donaldson is the Catharine and Howard Avery Professor at Stanford University School of Medicine and associate residency program director in the Department of Radiation Oncology at Stanford. She is also the chief of radiation oncology service at the Lucile Packard Children’s Hospital at Stanford. Recognized as an authority in clinical radiation oncology, Donaldson has received numerous honors and awards including the Marie Curie Award of the American Association for Women Radiologists, the Henry S. Kaplan Memorial Prize for teaching, and the Hoppe Leadership Award. She also has received gold medals from the American College of Radiology, the American Society for Radiation Oncology (ASTRO) and the American Radium Society. Donaldson is former president and the first female president of the American Board of Radiology (ABR) and ASTRO. She is one of only a few radiation oncologists to have served as president of the Radiological Society of North America, and is a member of the Institute of Medicine.

Morin is the Brooks-Hollern Professor, and a consultant in the Department of Radiology at Mayo Clinic Jacksonville. He is a fellow of the ACR, the American Association of Physicists in Medicine (AAPM) and the Society of Imaging Informatics in Medicine. In 2011, he received the William D. Coolidge Gold Medal Award of the AAPM and the gold medal from the ARRS and the ACR. Morin is the only medical physicist to receive a gold medal from the Florida Radiological Society, where he also served as president. He is a former president and chairman of the board at the AAPM and a former member of the ACR Board of Chancellors, the ABR Board of Trustees and the American Bard of Imaging Informatics Board of Trustees. He has served as an editor or reviewer for a number of journals, including Medical Physics; Radiology; American Journal of Roentgenology; Journal of Computer Assisted Tomography; Journal of Digital Imaging and Mayo Clinic Proceedings.

“In addition to being outstanding individuals, Drs. Levin, Donaldson and Morin have made many significant contributions to the radiology profession. Their exceptional experience and exemplary level of leadership in organized medicine is nothing short of inspirational. The RLI is honored to present them with Leadership Luminary Awards,” said Cynthia S. Sherry, MD, FACR, medical director of the Radiology Leadership Institute and chair of the American College of Radiology Commission on Leadership and Practice Development.

For additional information about the RLI, please visit radiologyleaders.org.To arrange an interview with an RLI spokesperson, please contact Heather Williams at 703-390-9822 or [email protected]