Toward a smarter way of recharging the aquifer 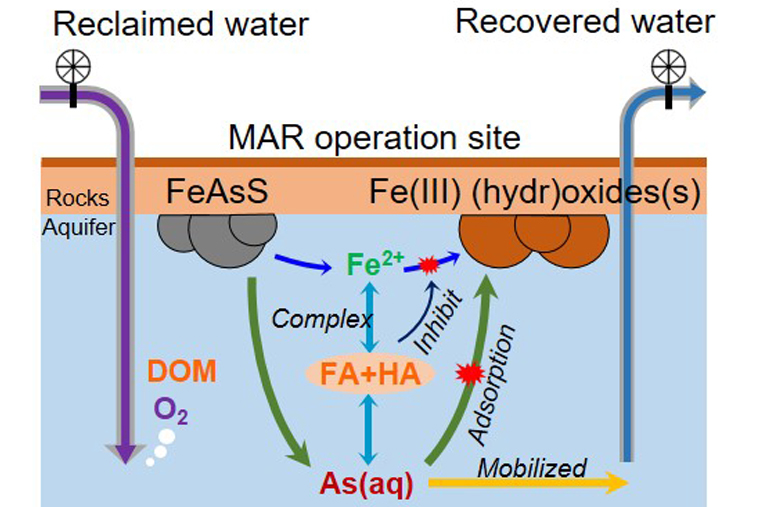 In this diagram, Young-Shin Jun, professor of energy, environmental and chemical engineering at the McKelvey School of Engineering, demonstrates how it is that the perfectly potable water used to recharge an aquifer can become contaminated with dangerous levels of arsenic 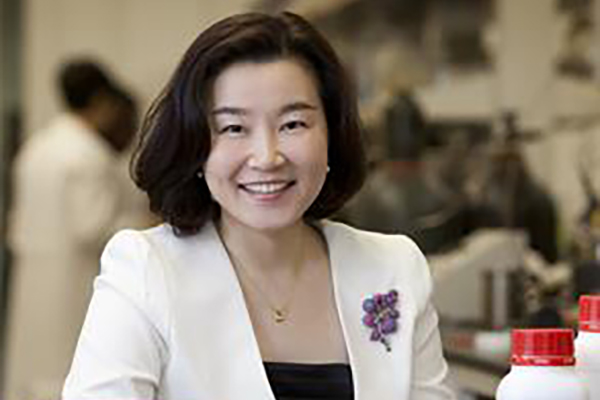 Young-Shin Jun, professor of energy, environmental and chemical engineering at the McKelvey School of Engineering

Newswise — To replenish groundwater, many municipalities inject reclaimed water into depleted aquifers. The injected water has been purified by secondary wastewater treatment, and, in some cases, the water has been treated through tertiary processes and can be clean enough to drink directly.

The original water in the aquifer was chemically stable, in equilibrium with the surrounding rocks, and was slowly recharged by natural processes (water infiltration). However, when more groundwater is consumed than the natural processes can restore, engineered recharging with purified, reclaimed water is needed. Unfortunately, over time, the reclaimed water sometimes becomes contaminated.

A research team in the McKelvey School of Engineering at Washington University in St. Louis, led by Young-Shin Jun,  professor of energy, environmental and chemical engineering; and Xuanhao Wu, a doctoral student in Jun’s lab, has determined how the potable water used to recharge an aquifer can become contaminated with dangerous levels of arsenic.

The research was published in Environmental Science and Technology.

In a managed aquifer recharge, “we continuously draw down the aquifer, but we never refill it enough,” Jun said.

“Our population can grow quickly and our lifestyle becomes more water dependent but the natural refilling process is slow,” she said. ” So water management practice has engineered a way to inject water to compensate for our consumption and achieve environmental sustainability.”

Keeping aquifers full is important for a few reasons. On the coasts, salty seawater can fill a depleted aquifer, creating a disastrous situation for the ecosystem and crops that the aquifer feeds. And, if the depleted zone remains empty, sinkholes can occur and the land may subside. Thus, refilling aquifers to provide drinking water is a standard practice in places from California to Florida.

But about 10 years ago, when working on managed aquifer recharge with the Environmental Protection Agency (EPA), Jun encountered a puzzling situation.

“When we injected the water, it was good,” she said, “but when we withdrew it, it was bad, tainted with arsenic. What was wrong?”

It turned out that although the water being injected into the aquifer was usually clean enough to drink, it was bringing something new to the aquifer: oxygen.

“By injecting reclaimed water, we are triggering oxidative dissolution of sulfide minerals in the aquifer, which were stable at low oxygen levels,” she said. In particular, she looked at arsenopyrite (FeAsS), a mineral that dissolves into iron, sulfur and, crucially, arsenic. Before the arsenic can reach problematic levels, however, another reaction takes place.

There is, however, another important factor.

Dissolved organic matter (DOM) — compounds that contain carbon — changes the situation drastically. “With high levels of organic compounds, we found the precipitation reaction is suppressed,” Jun said. When precipitation of iron oxides or hydroxides is suppressed, the arsenic does not adsorb sufficiently. Instead, it remains available in the water.

Jun is quick to emphasize that this is more than an experimental exercise in laboratory exercise. “This is not a potential future problem,” she said, noting that using reclaimed water is actual practice right now. “When thinking about water reclamation from aquifers, we need to consider the roles of organic matter,” Jun said.

“We have to take into account the DOMs in injected water to make sure they do not trigger more mobilization of toxins,” Jun said. “The roles of DOMs in managed aquifer recharge should be included in the predictive models. Knowing how water chemistry alters the chemical reactions in an aquifer will enable us to fully utilize the water, rather than discarding it as waste.

“Please keep in mind that there is only one kind of water in the world,” she said.

“All water — drinking water, seawater, groundwater, wastewater, stormwater, greywater, and more — is simply ‘water.’ Keeping it safe and sustainable is our continuing homework.”