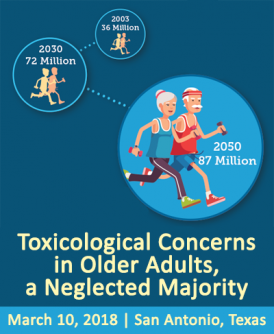 Newswise — One consequence of better health care and safer life styles has been an increase in the elderly population, both in the developing world and nations such as the United States, Europe, and Japan. The older population is growing faster than the total populace in practically all regions of the world and this disproportionate difference is accelerating. The proportion of older adults is projected to more than double worldwide over the next half century. At the global level, one in every 12 individuals was at least 60 years of age in 1950. By the year 2050, more than one in every five persons are projected to be aged 60 or over. Despite this increase, few issues in toxicological science associated with the aging process have been addressed, and the elderly remain a largely understudied, vulnerable population. Older adults may have increased and unique susceptibilities to adverse effects of drugs and environmental toxicants and may suffer from concomitant diseases requiring a large number of pharmaceuticals.

An unavoidable consequence of aging is a change in physiology. For example, renal function decreases with age and this can alter the ability to eliminate toxicants by excretion. With aging, the liver is cumulatively exposed to many xenobiotics with concomitant changes in the metabolic capability to biotransform toxicants. Additionally, changes in functional capability of other organs, such as the pancreas and gut, can increase susceptibility to the adverse effects of xenobiotics.

Another issue of importance in considering the physiologic changes associated with aging is the impact of pharmacotherapy. For example, people tend to develop more chronic diseases as they age and thus require more drugs. However, their toxicity and effects (singly or in combinations) in older individuals may not be appreciated. First, toxicities usually have been determined for individual drugs. Second, toxicity related to polypharmacy in the aging population may result from physiological changes that are not predictable based on findings with single agents. Third, drugs intended to treat chronic conditions, many used by older adults, may not have been studied in models adequate to assess potential age-related adverse effects. Thus, although a drug might demonstrate desired activity in proof-of-concept studies, these may not take into account biological differences associated with aging that could alter both safety and efficacy. In addition, diseases common in the elderly population may alter responses to xenobiotics, both pharmaceutical as well as environmental, that may not be adequately anticipated based on toxicology studies conducted in nonclinical studies in younger animals as well as clinical trials in adults.

In conjunction with the Society of Toxicology (SOT) 57th Annual Meeting and ToxExpo, a Contemporary Concepts in Toxicology (CCT) workshop titled “Toxicological Concerns in Older Adults, a Neglected Majority” has been organized to address and discuss the toxicities and altered susceptibilities to xenobiotic exposure associated with the aging process.

Being held Saturday, March 10, at the Henry B. González Convention Center in San Antonio, Texas, this workshop will address the following critical needs for older adults:

This CCT meeting will address these issues and others related to aging and toxicity. It is anticipated that an outcome of this conference will be a better appreciation for the issues associated with aging of importance to public health and medical practice and the data gaps therein. Registration is open now on the “Toxicological Concerns in Older Adults, a Neglected Majority” website.