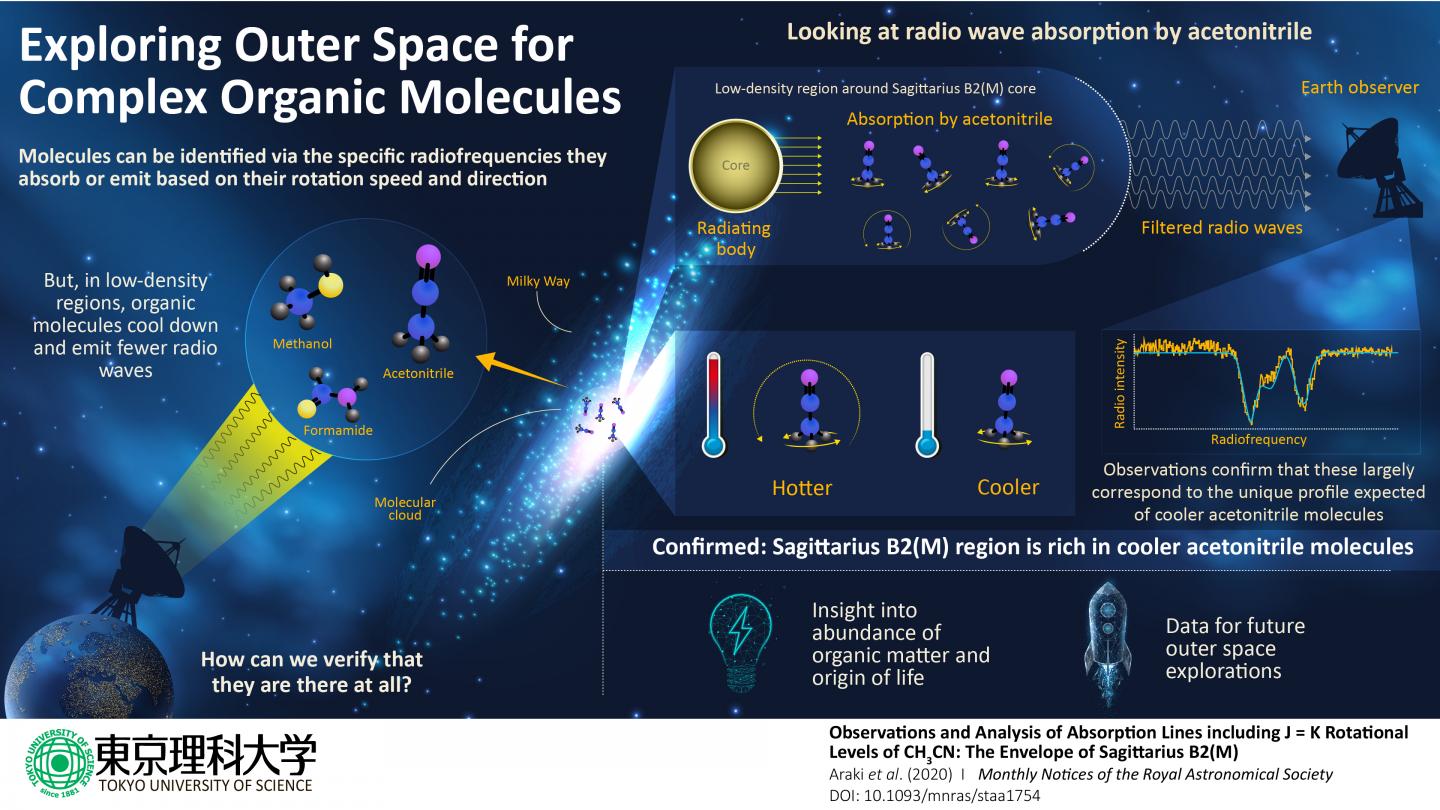 Scientists from Japan have found concluding evidence for the presence of a particular complex organic molecule in the regions of less dense gas clouds for the first time. 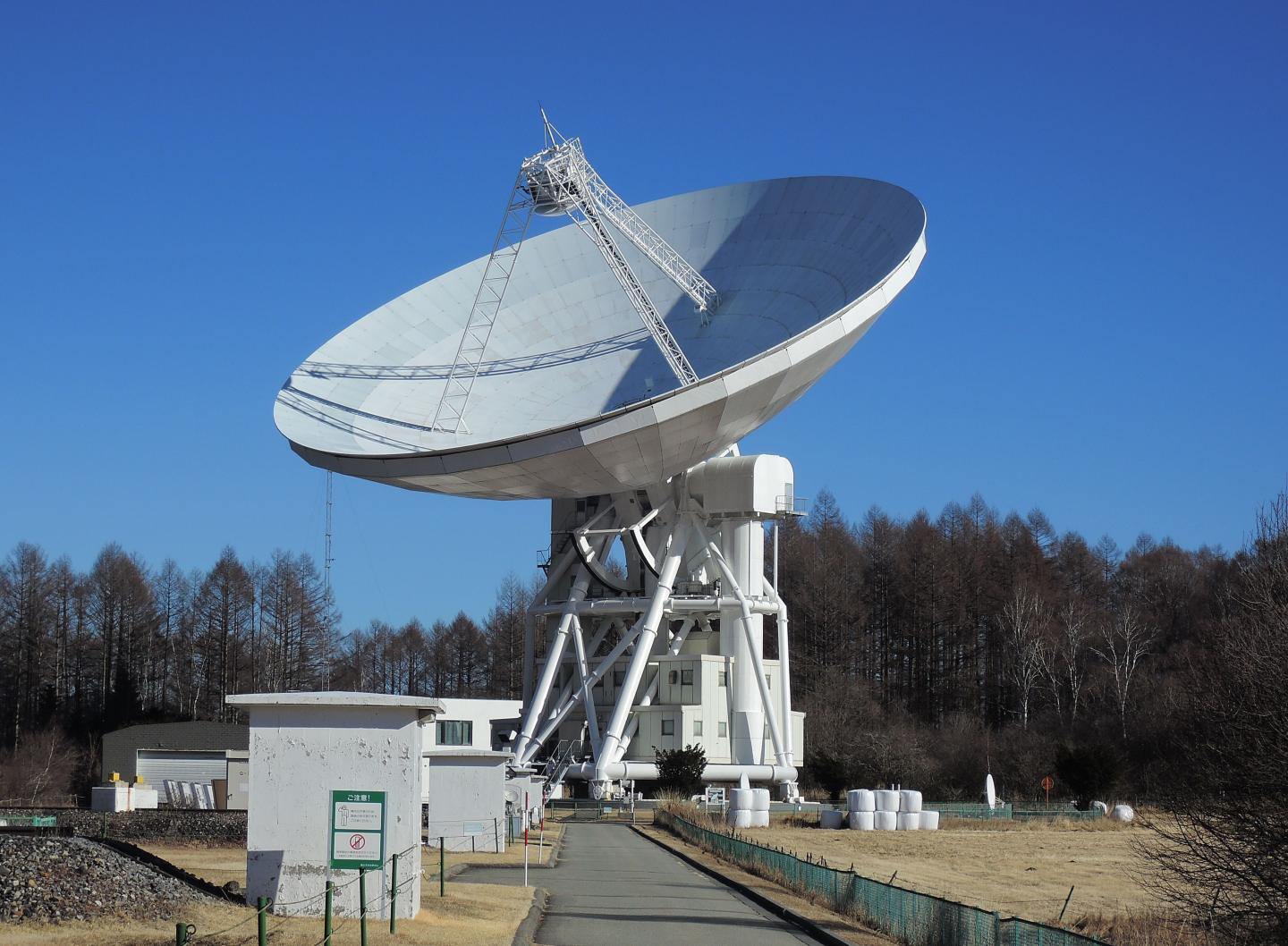 The 45-meter radio telescope at the Nobeyama Radio Observatory in Japan. 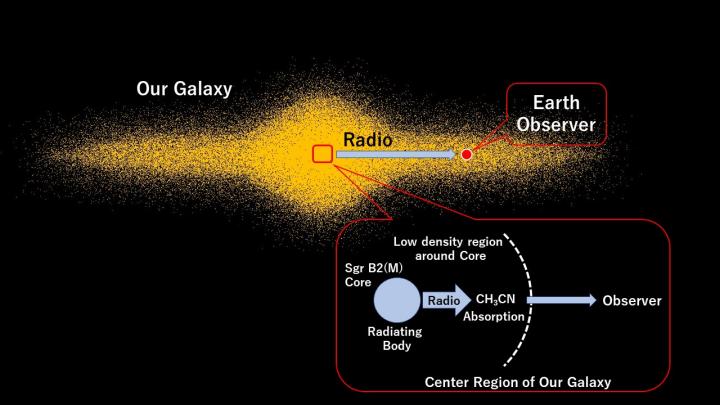 Newswise — The origin of life on Earth is a topic that has piqued human curiosity since probably before recorded history began. But how did the organic matter that constitutes lifeforms even arrive at our planet? Though this is still a subject of debate among scholars and practitioners in related fields, one approach to answering this question involves finding and studying complex organic molecules (COMs) in outer space.

Many scientists have reported finding all sorts of COMs in molecular clouds--gigantic regions of interstellar space that contain various types of gases. This is generally done using radio telescopes, which measure and record radiofrequency waves to provide a frequency profile of the incoming radiation called spectrum. Molecules in space are usually rotating in various directions, and they emit or absorb radio waves at very specific frequencies when their rotational speed changes. Current physics and chemistry models allow us to approximate the composition of what a radio telescope is pointed at, via analysis of the intensity of the incoming radiation at these frequencies.

In a recent study published in Monthly Notices of the Royal Astronomical Society, Dr Mitsunori Araki from Tokyo University of Science, along with other scientists from across Japan, tackled a difficult question in the search for interstellar COMs: how can we assert the presence of COMs in the less dense regions of molecular clouds? Because molecules in space are mostly energized by collisions with hydrogen molecules, COMs in the low-density regions of molecular clouds emit less radio waves, making it difficult for us to detect them. However, Dr Araki and his team took a different approach based on a special organic molecule called acetonitrile (CH3CN).

Acetonitrile is an elongated molecule that has two independent ways of rotating: around its long axis, like a spinning top, or as if it were a pencil spinning around your thumb. The latter type of rotation tends to spontaneously slow down due to the emission of radio waves and, in the low-density regions of molecular clouds, it naturally becomes less energetic or "cold."

In contrast, the other type of rotation does not emit radiation and therefore remains active without slowing down. This particular behavior of the acetonitrile molecule was the basis on which Dr Araki and his team managed to detect it. He explains: "In low-density regions of molecular clouds, the proportion of acetonitrile molecules rotating like a spinning top should be higher. Thus, it can be inferred that an extreme state in which a lot of them would be rotating in this way should exist. Our research team was, however, the first to predict its existence, select astronomical bodies that could be observed, and actually begin exploration."

Instead of going for radio wave emissions, they focused on radio wave absorption. The "cold" state of the low-density region, if populated by acetonitrile molecules, should have a predictable effect on the radiation that originates in celestial bodies like stars and goes through it. In other words, the spectrum of a radiating body that we perceive on Earth as being "behind" a low-density region would be filtered by acetonitrile molecules spinning like a top in a calculable way, before it reaches our telescope on earth. Therefore, Dr Araki and his team had to carefully select radiating bodies that could be used as an appropriate "background light" to see if the shadow of "cold" acetonitrile appeared in the measured spectrum. To this end, they used the 45 m radio telescope of the Nobeyama Radio Observatory, Japan, to explore this effect in a low-density region around the "Sagittarius molecular cloud Sgr B2(M)," one of the largest molecular clouds in the vicinity of the center of our galaxy.

After careful analysis of the spectra measured, the scientists concluded that the region analyzed was rich in acetonitrile molecules rotating like a spinning top; the proportion of molecules rotating this way was actually the highest ever recorded. Excited about the results, Dr Araki remarks: "By considering the special behavior of acetonitrile, its amount in the low-density region around Sgr B2(M) can be accurately determined. Because acetonitrile is a representative COM in space, knowing its amount and distribution though space can help us probe further into the overall distribution of organic matter."

Ultimately, this study may not only give us some clues about where the molecules that conform us came from, but also serve as data for the time when humans manage to venture outside the solar system.

About Tokyo University of Science

Tokyo University of Science (TUS) is a well-known and respected university, and the largest science-specialized private research university in Japan, with four campuses in central Tokyo and its suburbs and in Hokkaido. Established in 1881, the university has continually contributed to Japan's development in science through inculcating the love for science in researchers, technicians, and educators.

With a mission of "Creating science and technology for the harmonious development of nature, human beings, and society", TUS has undertaken a wide range of research from basic to applied science. TUS has embraced a multidisciplinary approach to research and undertaken intensive study in some of today's most vital fields. TUS is a meritocracy where the best in science is recognized and nurtured. It is the only private university in Japan that has produced a Nobel Prize winner and the only private university in Asia to produce Nobel Prize winners within the natural sciences field.

About Dr Mitsunori Araki from Tokyo University of Science

Dr Mitsunori Araki earned a PhD in Chemistry from The Graduate University of Advanced Studies, Japan, in 1999. After being a Research Fellow and an Assistant Professor in various universities in Japan, he joined the Tokyo University of Science in 2009 and, since 2014, he has been a Principal Investigator on astrochemistry research projects. His research interests mainly revolve around complex organic molecules in space and his goal is to find new such molecules and clarify their cosmic origin, both through experiments with synthetized molecules in the lab and via direct observations with radio telescopes.

Caption: Scientists from Japan have found concluding evidence for the presence of a particular complex organic molecule in the regions of less dense gas clouds for the first time.

Caption: The 45-meter radio telescope at the Nobeyama Radio Observatory in Japan.

Caption: Using radio wave absorption to detect acetonitrile in the molecular cloud of Sgr B2(M) at the center of our galaxy