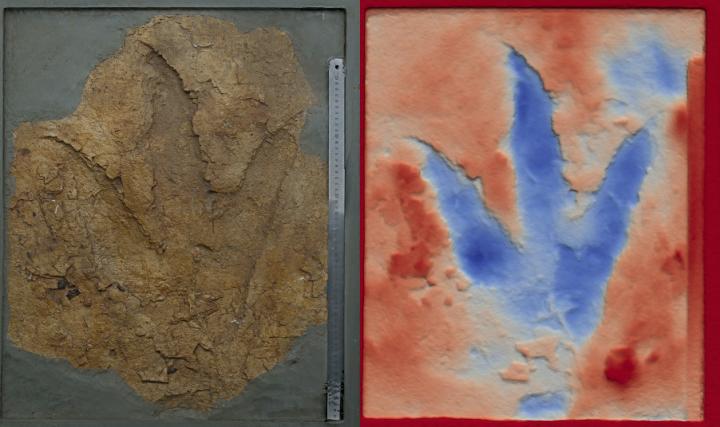 One of the dinosaur footprints from an Oakey mine (photograph and false-color deep map).

A reconstruction of a Jurassic dinosaur track-maker from southern Queensland in front of a silhouette of the largest known T. rex.

The discovery came in University of Queensland research, led by palaeontologist Dr Anthony Romilio, which analysed southern Queensland dinosaur footprint fossils dated to the latter part of the Jurassic Period, between 165 and 151 million-year-ago.

"But I think we've found them, right here in Queensland.

"The specimens of these gigantic dinosaurs were not fossilised bones, which are the sorts of things that are typically housed at museums.

"Rather, we looked at footprints, which - in Australia - are much more abundant.

"These tracks were made by dinosaurs walking through the swamp-forests that once occupied much of the landscape of what is now southern Queensland."

Most of the tracks used in the study belong to theropods, the same group of dinosaurs that includes Australovenator, Velociraptor, and their modern-day descendants, birds.

Dr Romilio said these were clearly not bird tracks.

"Most of these footprints are around 50 to 60 centimetres in length, with some of the really huge tracks measuring nearly 80 centimetres," he said.

"We estimate these tracks were made by large-bodied carnivorous dinosaurs, some of which were up to three metres high at the hips and probably around 10 metres long.

"To put that into perspective, T. rex got to about 3.25 metres at the hips and attained lengths of 12 to 13 metres long, but it didn't appear until 90 million years after our Queensland giants.

"The Queensland tracks were probably made by giant carnosaurs - the group that includes the Allosaurus.

"At the time, these were probably some of the largest predatory dinosaurs on the planet."

Despite the study providing important new insights into Australia's natural heritage, the fossils are not a recent discovery.

"The tracks have been known for more than half a century," Dr Romilio said.

"They were discovered in the ceilings of underground coal mines from Rosewood near Ipswich, and Oakey just north of Toowoomba, back in the 1950s and 1960s.

"Most hadn't been scientifically described, and were left for decades in museum drawers waiting to be re-discovered.

"Finding these fossils has been our way of tracking down the creatures from Australia's Jurassic Park."

Caption: One of the dinosaur footprints from an Oakey mine (photograph and false-color deep map).

Caption: A reconstruction of a Jurassic dinosaur track-maker from southern Queensland in front of a silhouette of the largest known T. rex.