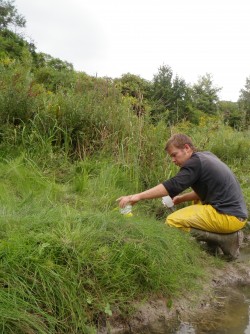 Eric Westberg collects a groundwater seep sample along the banks of the southern Nottawasaga River. 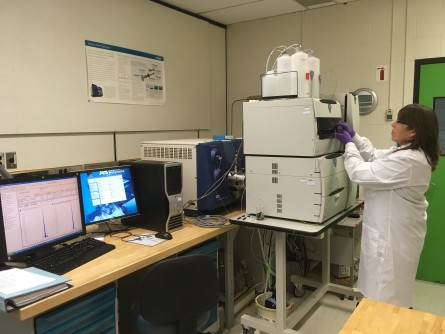 Newswise — We often “flush it and forget it” when it comes to waste from toilets and sinks. However, it’s important to be able to track this wastewater to ensure it doesn’t end up in unwanted places. A group of Canadian scientists has found an unlikely solution.

Tracing where this water ends up is hard to measure: What’s something found in all wastewater that will allow us to account for all of it? The answer, of all things, is artificial sweeteners. These have several advantages over other compounds sometimes used to track wastewater in the environment.

“They are very specific to wastewater and have very few other possible sources in the environment,” explains John Spoelstra, a research scientist with Environment and Climate Change Canada. “Their concentrations are often much higher than other wastewater markers and they don’t break down as quickly. This makes them easier to detect. Lastly, they are always present in wastewater. We have never found a wastewater sample that didn’t have these sweeteners present.”

Researchers looked at water from two sources in rural areas near Alliston, Ontario. The first was domestic water wells, privately-owned wells that supply water to a household. They also considered groundwater seeps, or springs. Using the artificial sweeteners as a flag, they tested to see if septic system water ended up in those sources.

Overall, about 30% of the wells and springs contained one or more of the four sweeteners they searched for. Furthermore, they found 3.4-13.6% of the domestic wells had 1% or more of their water coming from the output of a septic system. This finding for seeps was 2-4.7%. This showed the groundwater contained water from a septic system.

“Although these sweeteners in groundwater themselves may not be a human health concern, the fact that they are there means there is also wastewater, which may contain other chemicals or bacteria of concern,” Spoelstra adds. “Groundwater often gets to streams and lakes. Therefore the contamination of groundwater can also affect surface water quality. We currently don’t know the effects of artificial sweeteners on most organisms in the water.”

The researchers add that they didn’t test for bacteria and that these artificial sweeteners are considered safe to eat by the Canadian government. In the area of the study, their results also show the septic systems are not the main source of pollutants such as nitrates, which can also be found in local groundwater.

Septic systems are common outside of large cities. Waste from a household flows into the septic tank underground where it is treated and broken down by a mixture of bacteria. It’s then released into the soil and may be further filtered or treated there. Eventually, the wastewater may end up in local groundwater.

“Regular inspection and maintenance of septic systems and groundwater wells should be done to identify and fix possible problems,” adds Spoelstra. “Homeowners should also have their raw well water tested for bacteria at least once per year.”

For information on the maintenance of septic systems and wells, Spoelstra recommends homeowners consult with local government resources.

Read more about this research in the Journal of Environmental Quality. Environment and Climate Change Canada, the Ontario Ministry of Agriculture Food and Rural Affairs, and the Natural Sciences and Engineering Research Council funded this research.