Train Your Heart to Protect Your Mind 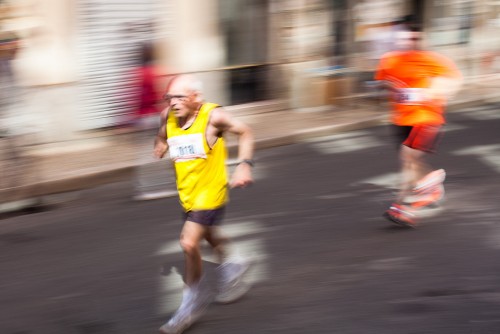 "El Gabo" by Davide Gabino is licensed under CC BY-NC-SA 2.0

Newswise — Exercising to improve our cardiovascular strength may protect us from cognitive impairment as we age, according to a new study by researchers at the University of Montreal and its affiliated Institut universitaire de gératrie de Montréal Research Centre. “Our body’s arteries stiffen with age, and the vessel hardening is believed to begin in the aorta, the main vessel coming out of the heart, before reaching the brain. Indeed, the hardening may contribute to cognitive changes that occur during a similar time frame,” explained Claudine Gauthier, first author of the study. “We found that older adults whose aortas were in a better condition and who had greater aerobic fitness performed better on a cognitive test. We therefore think that the preservation of vessel elasticity may be one of the mechanisms that enables exercise to slow cognitive aging.”

The researchers worked with 31 young people between the ages of 18 and 30 and 54 older participants aged between 55 and 75. This enabled the team to compare the older participants within their peer group and against the younger group who obviously have not begun the aging processes in question. None of the participants had physical or mental health issues that might influence the study outcome. Their fitness was tested by exhausting the participants on a workout machine and determining their maximum oxygen intake over a 30 second period. Their cognitive abilities were assessed with the Stroop task. The Stroop task is a scientifically validated test that involves asking someone to identify the ink colour of a colour word that is printed in a different colour (e.g. the word red could be printed in blue ink and the correct answer would be blue). A person who is able to correctly name the colour of the word without being distracted by the reflex to read it has greater cognitive agility.

The participants undertook three MRI scans: one to evaluate the blood flow to the brain, one to measure their brain activity as they performed the Stroop task, and one to actually look at the physical state of their aorta. The researchers were interested in the brain’s blood flow, as poorer cardiovascular health is associated with a faster pulse wave,at each heartbeat which in turn could cause damage to the brain’s smaller blood vessels. “This is first study to use MRI to examine participants in this way,” Gauthier said. “It enabled us to find even subtle effects in this healthy population, which suggests that other researchers could adapt our test to study vascular-cognitive associations within less healthy and clinical populations.”

The results demonstrated age-related declines in executive function, aortic elasticity and cardiorespiratory fitness, a link between vascular health and brain function, and a positive association between aerobic fitness and brain function. “The link between fitness and brain function may be mediated through preserved cerebrovascular reactivity in periventricular watershed areas that are also associated with cardiorespiratory fitness,” Gauthier said. “Although the impact of fitness on cerebral vasculature may however involve other, more complex mechanisms, overall these results support the hypothesis that lifestyle helps maintain the elasticity of arteries, thereby preventing downstream cerebrovascular damage and resulting in preserved cognitive abilities in later life.”

About this studyThis work was supported by the Canadian Institutes for Health Research (MOP 84378, Banting and Best Scholarship held by CJG, Canadian Research Chair to LB), the Canadian Foundation for Innovation (Leaders Opportunity Fund 17380), the Ministère du développement économique, de l’innovation et de l’exportation (PSR-SIIRI-239) and the Canadian National Sciences and Engineering Research Council (R0018142). The findings were published in Neurobiology of Aging on August 20, 2014. The University of Montreal is officially known as Université de Montréal.