Newswise — People with multiple sclerosis (MS) who underwent a non-invasive form of electrical brain stimulation experienced significant reductions in fatigue, a common and often debilitating symptom of the disease, according to new research from the Multiple Sclerosis Comprehensive Care Center at NYU Langone Health.

When compared to patients who were enrolled in a placebo arm of the study, those that received the stimulation —called transcranial direct current stimulation, or tDCS —were found to have about a six-point drop on a 32-point scale measuring fatigue severity, according to the findings recently published online in the Multiple Sclerosis Journal.

Because fatigue is a common complaint with MS, and with no effective treatments to address it, the researchers, encouraged by their findings, note that they may point to a future role for this technology in treating this particular symptom. However, they also caution the need to validate the findings in larger studies —and strongly caution individuals with MS not to try over-the-counter stimulation technologies at home or outside of a rigorous research setting.

“Fatigue is one of the most common symptoms affecting quality of life for MS patients and practitioners have lacked good treatment options,” says senior study author Lauren Krupp, MD, the Nancy Glickenhaus Pier Professor of Pediatric Neuropsychiatry at NYU School of Medicine and director of the Multiple Sclerosis Comprehensive Care Center at NYU Langone Health. “However, the positive results from our study suggest that tDCS might offer benefit in fatigue reduction. The next step is to see if these benefits can be replicated and sustained in larger studies. But our initial findings are very promising.”

About 75 percent of people with MS report fatigue among their most disabling disease symptoms. Medications, such as those that treat narcolepsy, behavior-based therapies and even exercise programs are often prescribed —but benefits have been found to be unreliable.

This led the NYU Langone researchers to study tDCS, a non-invasive therapy that had shown promise in previous neurology studies, including those in MS. During tDCS, a low-amplitude, direct electrical current is applied through electrodes placed on the scalp via a headset. The current targets the brain’s dorsolateral prefrontal cortex, which previous research has shown to be safe and tolerable, and evidence suggests may play a role in fatigue and cognitive symptoms.

In the controlled study, 27 people with MS were randomized to receive either tDCS or a placebo treatment while playing a cognitive training game that targets processing speed and working memory. They took part in 20-minute sessions, five days per week, at their homes. The participants would videoconference with a member of the study team; put their headset in place; receive a unique one-time use code to activate it; and participate in the 20-minute tDCS or placebo treatment. Fifteen patients received tDCS while 12 received the placebo.

After 20 sessions, participants reported their level of fatigue using a measurement scale known as the Patient-Reported Outcomes Measurement Information System (PROMIS) that grades fatigue on a score of up to 32, with the higher numbers correlating with more fatigue. The researchers reported a statistically significant reduction in the group that underwent tDCS compared to the placebo group, with participants on average experiencing a 5.6-point drop in fatigue while control participants actually saw a 0.9-point increase in fatigue.

The findings also suggested that more treatments may lead to greater benefit, with the decrease in fatigue greater after 20 sessions when compared to 10 sessions in an initial study. In addition, participants with the highest levels of fatigue at the start of the study were also shown to experience the greatest benefits. Further, many of the participants experienced an even more marked benefit returning their fatigue to near normal levels, according to the researchers.

“These data are a hopeful sign that we can use tDCS to help patients with MS manage their fatigue, and that continuing the treatment may show even better results,” says lead study author Leigh Charvet, PhD, associate professor of neurology and director of MS research at NYU Langone Health. “Importantly, tDCS can be delivered remotely to patients at home, offering a practical option for patients, especially those with travel limitations and MS-related disability.”

The exact mechanism behind tDCS is unclear and requires more research. It is thought to change the brain’s cortical excitability by making it easier for neurons to fire, thereby improving connections and expediting learning that takes place during rehabilitation.

Earlier research from the study team found reductions in cognitive symptoms of MS in patients who underwent tDCS. They also plan to conduct larger clinical trials for tDCS for MS-related fatigue, motor and cognitive symptoms. The Multiple Sclerosis Comprehensive Care Center at NYU Langone Health has the only program in the U.S. making this therapeutic research opportunity available to individuals living with MS.

The tDCS device used in the study was invented by Marom Bikson, PhD, professor of biomedical engineering at The City College of New York, and Abhishek Datta, PhD, chief technology officer of Soterix Medical, which holds a patent on the device. Dr. Charvet provided Dr. Bikson’s team with feedback from trial participants to make the device more accessible for use with MS. The study was funded by the National MS Society pilot grant (PP-1411-02021) and The Lourie Foundation, Inc. 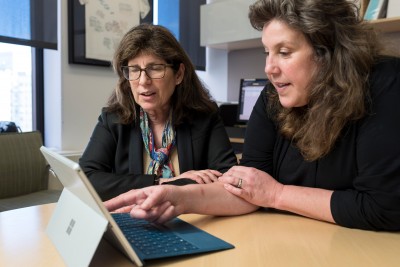 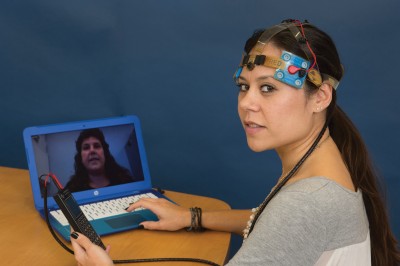 Caption: Leigh Charvet, PhD and a member of her research team use the transcranial direct current stimulation (tDCS) equipment