14-May-2015 9:05 AM EDT, by Texas AArrayM AgriLife Edit Institution
favorite_border 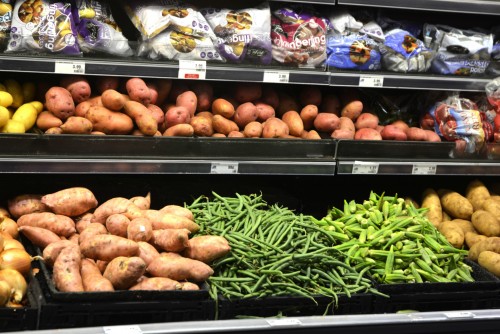 More than 40 percent of the fruit and vegetables produced in the world is thrown away as waste. This happens from the farm to the consumer for a variety of reasons. Faculty at Texas A&M University’s College of Agriculture and Life Sciences have vowed to find ways to reduce global waste by 5 percent over the next decade.

Newswise — COLLEGE STATION — Agriculture faculty at Texas A&M University are talking trash — as in too much food ends up there.

Now they are vowing to team up and figure out how to reduce global food waste by 5 percent over the next decade, according to Dr. Steve Searcy, the group’s facilitator and head of the Texas A&M biological and agricultural engineering department.

The Food and Agriculture Organization of the United Nations has estimated that 30 percent of the food produced in the world is never consumed due to various factors that cause waste, Searcy said.

More than 40 percent of the fruit and vegetables produced in the world is thrown away as waste. This happens from the farm to the consumer for a variety of reasons. Faculty at Texas A&M University's College of Agriculture and Life Sciences have vowed to reduce global waste by 5 percent over the next decade.

More than 40 percent of the fruit and vegetables produced in the world is thrown away as waste. This happens from the farm to the consumer for a variety of reasons. Faculty at Texas A&M University’s College of Agriculture and Life Sciences have vowed to find ways to reduce global waste by 5 percent over the next decade.

“We’ve done a lot of work on how we’re going to feed the world,” Searcy said about the faculty of Texas A&M’s College of Agriculture and Life Sciences. “Traditionally, the idea has been on ways to genetically improve the crops and cultural practices in order to increase yield. Advances in agriculture have brought drastic increases in yield.

“But by 2050, even with the same rate of growth in yield, we will not be able to keep pace with food demands for maize, rice, wheat and soybeans,” he said.

Searcy showed statistics pointing to food waste in both developed and developing regions of the world and attributed causes to both the farm producers and retailers as well as to consumers.

“With the growing global population, we can’t afford a 30 percent loss in our ability to feed the world,” he said.

“Feeding Our World” is one of five Grand Challenges designated by the College of Agriculture and Life Sciences to be addressed through research, teaching and outreach in an interdisciplinary, faculty-driven initiative.

To meet the goal of decreasing waste, Searcy said, the agriculture and life sciences faculty along with the Texas A&M AgriLife Extension Service and Texas A&M AgriLife Research will assess the problem, develop partnerships and collaborate more fully with each other.

Looking at the cost of food waste, Dr. Roger Norton, Texas A&M agricultural economist, said one effort should be aimed at getting those involved in the “value chain links” to work together. He defined the value chain as being everything that happens from the farmer to the market, each adding to the value of the original crop.

He also explained a difference between food loss and food waste.

“Food is lost when it becomes unusable by humans or for animal feed,” he said. “Food is wasted when it is discarded although it is still usable.”

In developing countries, food loss is more common, he added. In developed countries, such as the U.S., food waste is the bigger issue.

He cited several reasons for the loss at the farm – pest damage or prices too low to make harvesting worthwhile – and at the processing and market level – inadequate storage, spillage in processing or rejection of produce based on looks rather than quality.

In addition to using eBeam technology to safely irradiate all foods from spices to fresh produce, Pillai said, research also is exploring how to increase the shelf-life of processed foods to as many as five years. This would be especially helpful in developing countries where the highest percentage of overall waste occurs in the processing sector.

Also discussed were ways to reduce waste in school lunches based on a 2012-13 study by AgriLife Research and ways to educate people through AgriLife Extension programs on reducing food waste in their homes.

Dr. Alan Sams, executive associate dean of the college, said the sharing of information from the faculty panel and attendees is the beginning of an in-depth study by the college. The plan is to develop a course of action and proposals for funding by September to meet the overall goal of drastically reducing waste by 2025.