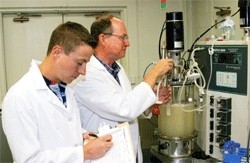 Steven Hutcheson, professor of cell biology and molecular genetics and president and CEO of Zymetis Inc. (right), and Ben Woodard, left, director of the UMd Mtech Bioprocess Scale-Up Facility (BSF), work in the BSF to scale up the Zymetis bacterium.

Newswise — University of Maryland research that started with bacteria from the Chesapeake Bay has led to a process that may be able to convert large volumes of all kinds of plant products, from leftover brewer's mash to paper trash, into ethanol and other biofuel alternatives to gasoline.

That process, developed by University of Maryland professors Steve Hutcheson and Ron Weiner, is the foundation of their incubator company Zymetis, which was on view today in College Park for Maryland Governor Martin O'Malley and state and university officials.

"The new Zymetis technology is a win for the State of Maryland, for the University and for the environment," said University of Maryland President C.D. Mote, Jr. "It makes affordable ethanol production a reality and makes it from waste materials, which benefits everyone and supports the green-friendly goal of carbon-neutrality.

"It also highlights the importance of transformational basic research and of technology incubators at the University. Partnership with the State enables University of Maryland faculty and students to commercialize new discoveries quickly."

"Today, Marylanders are leading the nation in scientific discovery and technology innovation," said Governor Martin O'Malley. "We must continue to invest in Marylanders like Steve Hutcheson and in their revolutionary ideas to protect our environment, create jobs, and improve lives."

75 Billion Gallons a YearThe Zymetis process can make ethanol and other biofuels from many different types of plants and plant waste called cellulosic sources. Cellulosic biofuels can be made from non-grain plant sources such as waste paper, brewing byproducts, leftover agriculture products, including straw, corncobs and husks, and energy crops such as switchgrass. When fully operational, the Zymetis process could potentially lead to the production of 75 billion gallons a year of carbon-neutral ethanol.

The secret to the Zymetis process is a Chesapeake Bay marsh grass bacterium, S. degradans. Hutcheson found that the bacterium has an enzyme that could quickly break down plant materials into sugar, which can then be converted to biofuel.

The Zymetis researchers were unable to isolate the Bay bacterium again in nature, but they discovered how to produce the enzyme in their own laboratories. The result was Ethazyme, which degrades the tough cell walls of cellulosic materials and breaks down the entire plant material into bio-fuel ready sugars in one step, at a significantly lower cost and with fewer caustic chemicals than current methods.

Hutcheson projects a $5 billion enzyme market for biofuels. The energy bill passed by the U.S. Senate in December mandates oil companies to blend in 21 billion gallons of cellulosic ethanol with their gasoline by 2022.

Inventors of the YearHutcheson and Weiner won the university's Office of Technology Commercialization Inventor of the Year Award in 2007 in the Life Science category for their enzyme system invention.

Founded in 2006, Zymetis entered the university's MTECH VentureAccelerator Program, which provides hands-on business assistance to faculty and students interested in forming companies around university-created technologies. "MTECH VentureAccelerator helped us validate our market," says Hutcheson. "They found space for our company. They helped us with licensing our technology, forming financial and business plans, and establishing trademarks."

Zymetis also sought expertise from MTECH's Bioprocess Scale-Up Facility (BSF) staff to determine how to mass-produce S. degradans. The BSF is part of the MTECH Biotechnology Research and Education Program, an initiative dedicated to research, education and the development of biotechnology products and processes for Maryland companies.