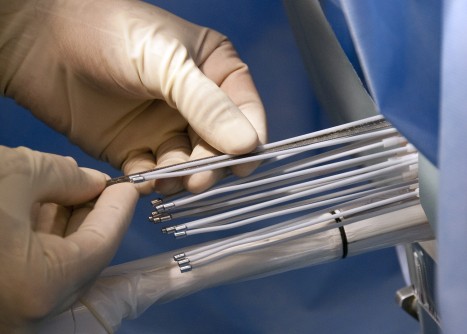 Newswise — Prostate cancer is one of the most common cancers diagnosed nationally among men. The National Cancer Institute estimates 161,000 were diagnosed in 2017.

While there are many treatment options for men with prostate cancer, a recent national study published in the Journal of the American Medical Association compared the effectiveness of treatments for high-risk prostate cancer.

Beaumont has long been a pioneer in treating prostate cancer using brachytherapy.

Researchers found treating patients with a combination of external beam with brachytherapy resulted in a decline in metastatic cancer rates from 25 to 8 percent. Metastatic cancer is cancer that has spread to a body site remote from where it started. Cancer mortality rates decreased from 12 percent in patients treated with primary surgery or external radiation alone, to 3 percent in patients treated with the combination of external radiation plus brachytherapy.

Brachytherapy may be performed in combination with external beam radiation therapy to help destroy the main mass of tumor cells for certain types of cancer.

Dr. Krauss is a leading expert in treating prostate cancer with high-dose-rate brachytherapy. Depending on the type of prostate cancer, some patients can be treated entirely with two, or sometimes as little as one, minimally invasive brachytherapy treatment. He continues his research to further refine the treatment duration and establish an optimal treatment dose.