Study in Australia reveals ability to 'wait out the heat' 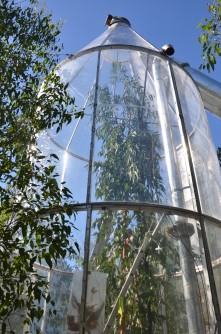 Newswise — When Dr. John Drake and his colleagues started studying how native eucalyptus trees in Australia reacted to extreme heat and drought, the scientists thought they knew what they would find.

They expected to learn about the mechanisms of the trees’ decline. They anticipated describing the patterns that emerged as healthy trees died. They expected hydraulic failure and carbon starvation.

But that’s not what they saw.

“The trees were just fine,” said Drake, now an assistant professor at the College of Environmental Science and Forestry (ESF) in Syracuse, New York. “There was no burn damage. There was no change in the growth rate.”

Drake worked on the project when he served as a researcher at the Hawkesbury Institute for the Environment at the University of Western Sydney in Australia. The team’s findings, published in the journal, Global Change Biology, this past fall, describe the mechanisms by which Australian eucalyptus trees stay functional under heatwave conditions. The work has led to a better understanding of how trees cope with heatwaves.

The experiment replicated a “heat wave of the future,” growing trees in special Whole Tree Chambers at the university’s Hawkesbury campus. Scientists use the chambers to grow nearly full-height trees in a fully controlled environment. They can precisely and accurately measure the trees’ rates of photosynthesis and water use. The researchers artificially imposed a year of warming and then a four-day, high-intensity heatwave on the trees.

“We were looking into how trees can survive because of their physiological aspects. It’s related to concern about the potential for weather extremes in a world that is changing,” Drake said.

Instead, the results showed the trees had a surprising capacity to cope with the heatwave. They used several strategies to keep themselves healthy:

Drake said it was surprising to see how well the trees withstood the harsh environment. “They can maintain a healthy canopy and, essentially, wait out the heat,” he said.

There is need for further research on the subject, and Drake expects to focus on it now that he is at ESF, where he teaches natural resources ecology and a graduate course in tree physiology. It could be that such mechanisms exist only in Australian eucalyptus trees. But scientists could discover that species native to the northern hardwood forests have similar abilities. It’s an important area for research because the progressively warmer summers in the Northeast are affecting trees in many ways.

In addition to rural forests that are managed for an array of reasons, the work has implications in the field of urban forestry. Recent research, including work done by ESF scientists, has documented the cooling effects of trees in cities; subsequently, there is a link to human health as heatwaves cause illness and death among vulnerable populations.