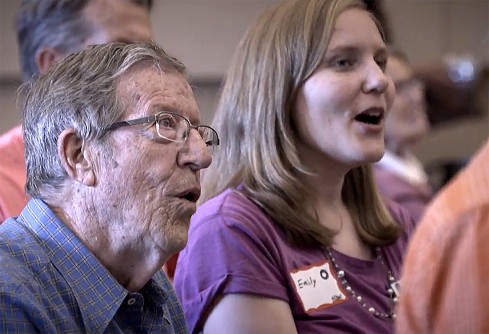 Flagstaff resident Gordon Holt and Emily Sakievich, a master's student in communication disorders, sing as part of the Mountain Tremors, a choir for people with Parkinson's disease. 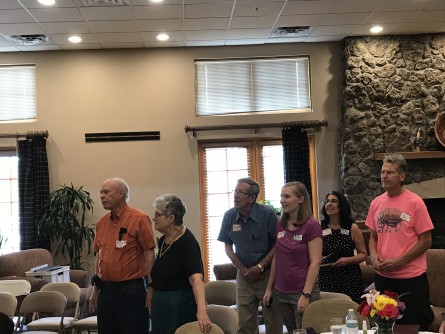 Members of the Mountain Tremors sing at the Parkinson's Support Group at The Peaks on July 11.

Newswise — There are no spectators at a Mountain Tremors choir practice. There are only singers—loud singers who will call out the insecurely tone-deaf visitor who comes expecting to just sit and observe.

Of course, the purpose of this choir is to sit up straight, control breathing, follow the director’s instructions and sing with as much volume as the diaphragm will allow; singing on key is optional. Singing with gusto, you see, is literally keeping at bay the deleterious effects of Parkinson’s disease, an incurable neurological disease that, over time, erodes a person’s ability to move, speak, think and emote.

The disease is what ties together this little choir, comprised half of Flagstaff residents with the disease and half faculty and students from Northern Arizona University’s Department of Communication and Speech Disorders (CSD) and School of Music. Well, that and a love of singing.

“Since all skeletal muscles are affected, singing is a recommended exercise for people with Parkinson’s,” said Gordon Holt, who’s been a member of the choir since it began two years ago. “The other reason I’m involved is because I love music. This choir is so much fun. Every time it’s always fun.”

Fe Murray, a professor of speech-language pathology, started the choir two years ago, when now-choir regular Linda Webb, a member of the Parkinson Support Group at The Peaks Senior Living Community, asked CSD clinic director Kim Farinella about creating a Parkinson’s choirs in Flagstaff. Farinella asked Murray if she was interested in facilitating it.

“The goals of the choir are to develop a community of people with neurological impairments, their families, caregivers and friends, around music,” she said. “For those with Parkinson’s in particular, I have seen an improvement in social engagement, as well as a maintenance of vocal ability. We have a small core group of loyal members who may not have much in common outside of their diagnosis, yet music provides a common ground, something they can all relate to, a shared joyful experience.”

Plus, who doesn’t want to rock along to classic Eagles, groove to Elvis Presley and dance to Diana Ross?

The therapeutic case for singing loud

Valerie Carter, a professor of physical therapy at NAU, said Parkinson’s is a disease of the basal ganglia, a part of the brain that affects movement, cognition, motivation, emotions and speech. In Parkinson’s, the basal ganglia isn’t getting enough dopamine to function at the normal level, essentially acting as a dimmer switch to the person’s mental and physical activity.

The result is the known Parkinson’s symptoms: slow, quiet, often monotonal speech, little facial movement, slow and small steps, stooped posture and slower brain activity. Although research shows that exercising these muscle groups can slow and possibly reverse symptoms, the lack of motivation the dimmer switch causes means many people on Parkinson’s simply don’t have the motivation to take action themselves.

That means singing in the shower or the car may not help that much, but a choir that includes weekly practice, learning words and patterns, pausing when the music does, harmonizing with other members and then performing instead of others can hit all of the notes to hold off Parkinson’s symptoms.

“Your muscles are working, your brain is working with learning new things and your voice is getting louder because you have to practice it,” Carter said. “That’s why choir is so great. You need to sing loud. You need to sing on pitch, hopefully. You need to listen, you need to pause. Those are all things people with Parkinson’s struggle with, but if they practice they can actually outperform healthy control individuals.”

Parkinson’s researchers throughout the world are studying how certain activities can slow the disease and provide a better quality of life, but Carter found in her work much of the research focused on one aspect—voice training or physical exercise or mental cognition—while she has worked to combine treatments to address multiple symptoms. Choir is great for that, as is boxing, which requires quick, powerful movements side to side and backwards and forwards, along with an awareness and responsiveness to surroundings, and the tango, which requires dancers to move in rhythm with a partner and take large steps backwards.

“When you add the beat of the tango music, or music in general, there’s just an ease of movement,” she said. “Tango itself calls for stepping forward and backward.”

The choir fulfills a different need for its members as well. Parkinson’s can be a lonely disease, said Emily Sakievich, a CSD master’s student who joined the choir in its third semester. Voice and touch are two main ways humans use to communicate, and Parkinson’s “literally freezes your body and voice.”

“I can’t begin to imagine what that feels like,” she said. “Although I do think about singing as a form of therapy, I don’t necessarily look at the members of the choir clinically; they’re my friends and it’s so uplifting for me to be around their fun positivity.”

Holt feels the same way. As a doctor, he knows the importance of activity to slow the disease’s progression, but he just loves being in the choir and loves singing. He was in his church choir for decades when living in Phoenix and has a list of favorite songs ranging from musicals to opera to folk. He has a log dating back to the start of the choir, with lists of all the songs they’ve performed, what CSD students were part of the choir and who directed them.

But don’t ask him his favorite song.

“Oh gosh, there’s been so many fun ones,” he said. “I can’t say my favorite song. I just like so many of them.”

Sakievich was one of the first students to join. Her clinical interest was secondary to her human interest in the choir.

“I have always known I want to find ways to make music part of my clinical practice, so it was an opportunity I couldn’t miss,” she said. “I was also very curious; my grandfather sang in choirs and small groups his whole life and the last few years of life he stopping singing. He said it was because his voice wasn’t the same as it was before he was diagnosed with Parkinson’s disease.”

About a dozen other CSD students have participated in the choir. They help choir members focus on posture, breath control, vocal quality, loudness and articulation, which provides experience for the students with a population they may not normally see.

“This experience will prepare our students for possible future practice with adults and helps them to see them as people first, which will help the students be more empathetic and effective clinicians in the future,” Murray said.

She also reached out to Edith Copley, NAU’s director of choral studies, who in turn reached out to music students and have sent a number of directors and accompanists. Both Leon Lucero, this year’s director, and Lorenzo Slavin, the accompanist, are finishing their time with the choir after the summer. The upcoming concert will be their fourth.

For Lucero, a music education major, it’s been a great learning experience but also a great experience overall.

“The best part of the experience is working with people who just love to sing,” Lucero said. “They come into rehearsals eager to be there, and they leave the same way, always super excited for next week.”

While music education is generally considered more at the K-12 level, the general process he goes through with the Mountain Tremors—picking songs the choir will enjoy singing and be able to learn, teaching non-musicians about following a director and learning by rote instead of reading music, catching tricky areas quickly and walking the singers through it—will be useful in his future classrooms.

“I plan to teach choir for the rest of my life, and I’ll encounter many levels of singers along the way,” he said. “Being able to work with a group of individuals who aren’t ‘musicians’ prepares me for the day I walk into a rehearsal and nobody can read music.” 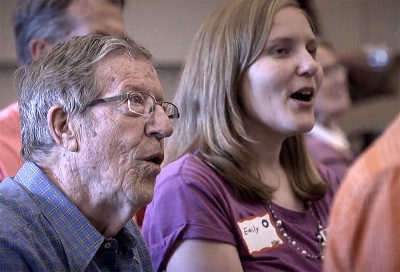 Caption: Flagstaff resident Gordon Holt and Emily Sakievich, a master's student in communication disorders, sing as part of the Mountain Tremors, a choir for people with Parkinson's disease. 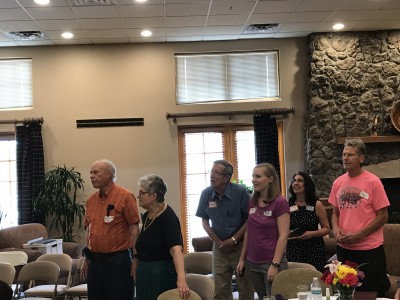 Caption: Members of the Mountain Tremors sing at the Parkinson's Support Group at The Peaks on July 11.