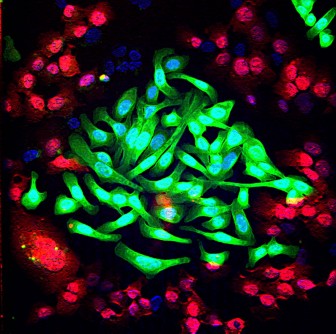 Lung cancer cells (green) cultured together with normal lung cells (red). The triple-antibody combination EGFR, HER2, and HER3 strongly impairs the survival of tumor cells while sparing normal cells.

Newswise — Lung cancer is the leading cause of cancer death worldwide, responsible for some 1.59 million deaths a year. That figure is due, in part, to the fact that lung cancer often returns after what seems at first to be successful treatment. However, the recurring cancer is often resistant to the chemotherapy and other drugs that originally drove it into remission. But now, according to new research by the Weizmann Institute of Science’s Prof. Yosef Yarden, a new strategy involving a three-pronged approach might keep an aggressive form of lung cancer from returning.

The research, says Prof. Yarden, arose out of some puzzling results of clinical trials. One class of relatively common lung cancers, which carry a particular mutation in a receptor (epidermal growth factor receptor, or EGFR) on the cell membrane, can be treated with a sort of “wonder drug.” This drug keeps a growth signal from getting into the cell, thus preventing the deadly progression and spread of the cancer. But within a year, patients with this mutation invariably experience new cancer growth, usually as a result of a second EGFR mutation. To prevent this from happening, researchers had tried to administer another drug, an antibody that is currently used to treat colorectal cancer. This drug also obstructs the passing of the growth signal by stopping EGFR, and should have been able to effectively block the EGFRs – the growth receptors – including those generated by the second mutation. However, clinical trials of the drug for lung cancer did not produce results. “This finding ran counter to everything we knew about the way tumors develop resistance,” says Prof. Yarden.

How do the cancer cells manage to circumvent the blockade put up by an anti-EGFR antibody? In the new study, which appeared on June 3 in Science Signaling, Prof. Yarden and his student Maicol Mancini discovered what happens to cancer cells when they are exposed to the receptor-blocking antibody.

“The blocked receptor has ‘siblings’ – other receptors that can step up to do the job,” says Prof. Yarden. Indeed, the team found that when the main receptor (EGFR) continued to be blocked, one of the cell’s communication networks was rerouted, causing the siblings to appear on the cell membrane instead of the original receptor. The finely tuned antibody drug did not block these, and thus the cancer cells were once again “in business.”

The researchers uncovered the chain of protein communication in the new network that ultimately leads to appearance of the sibling growth receptors. This new network may overcompensate for the lack of the original receptor, making it even worse than the original. In addition, the team found that the rewired network sometimes included the participation of another molecule (receptor tyrosine kinase MET) that specifically binds to one of the siblings – and is often found in metastatic cancers.

Once the researchers discovered how the blockade was breached, they set out to erect a better line of defense. Prof. Yarden and his team created new monoclonal antibodies that could target the two main growth receptor siblings, named HER2 (the target of the breast cancer drug trastuzumab, or Herceptin®) and HER3. The idea was to give all three antibodies – HER2, HER3, and the original anti-EGFR antibody – at the same time in order to preempt resistance to the treatment. Indeed, in isolated cancer cells, applying the triple treatment prevented them from completing the rewiring necessary for continuing to receive growth signals.

Next, the team tried the three-pronged approach on mouse models of lung cancer that had the secondary resistance mutation. In these mice, the tumor growth was almost completely arrested. More importantly, further research showed that the triple treatment reined in the growth of the tumor while leaving healthy cells alone.

Although much more research is required before the triple-treatment approach makes it to the clinic, Prof. Yarden is hopeful that it will change not only the treatment protocol for lung cancer, but our understanding of the mechanisms of drug resistance. “Treatment by blocking a single target can cause a feedback loop that ultimately leads to a resurgence of the cancer,” he says. “If we can predict how the cancer cell will react when we block the growth signals it needs to continue proliferating, we can take preemptive steps to prevent this from happening.”

Prof. Yarden is the recipient of the 2015 Leopold Griffuel Prize for Fundamental Research, awarded by ARC Foundation for Cancer Research, which is the major association in France for fighting cancer.

Prof. Yosef Yarden’s research is supported by the Dr. Miriam and Sheldon G. Adelson Medical Research Foundation; the Maurice and Vivienne Wohl Biology Endowment; the Louis and Fannie Tolz Collaborative Research Project; the European Research Council; and the Marvin Tanner Laboratory for Research on Cancer. Prof. Yarden is the incumbent of the Harold and Zelda Goldenberg Professorial Chair in Molecular Cell Biology.