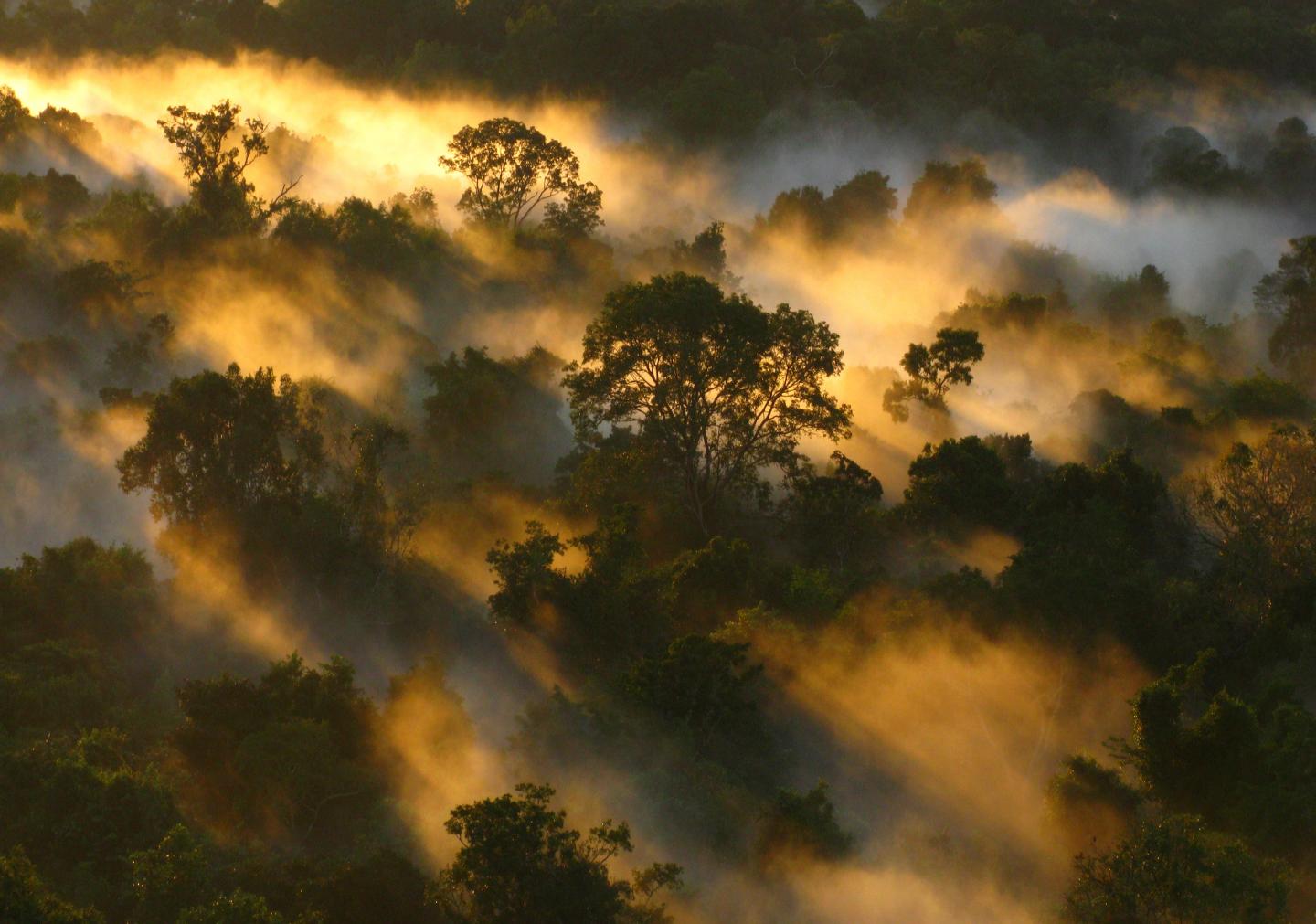 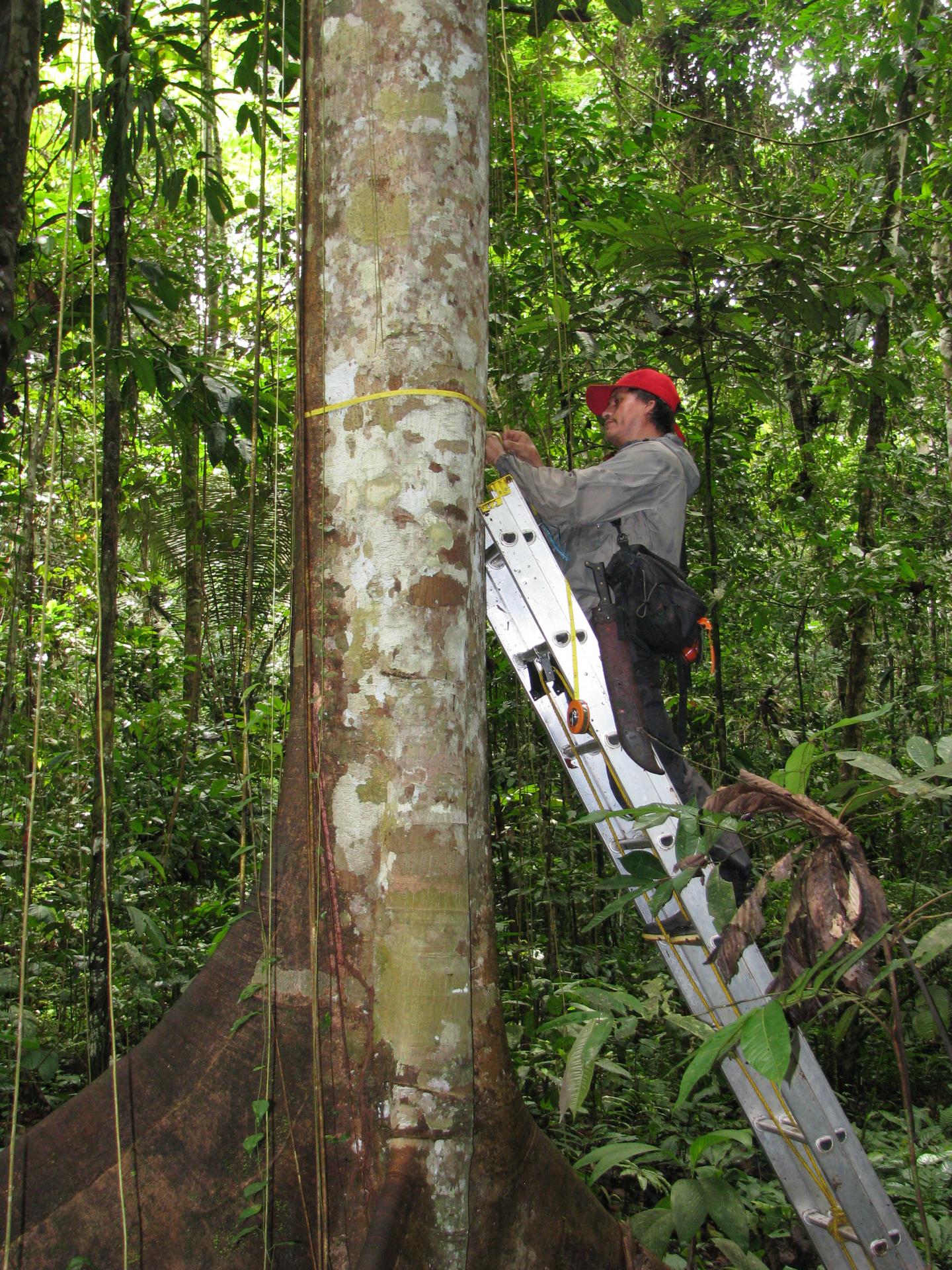 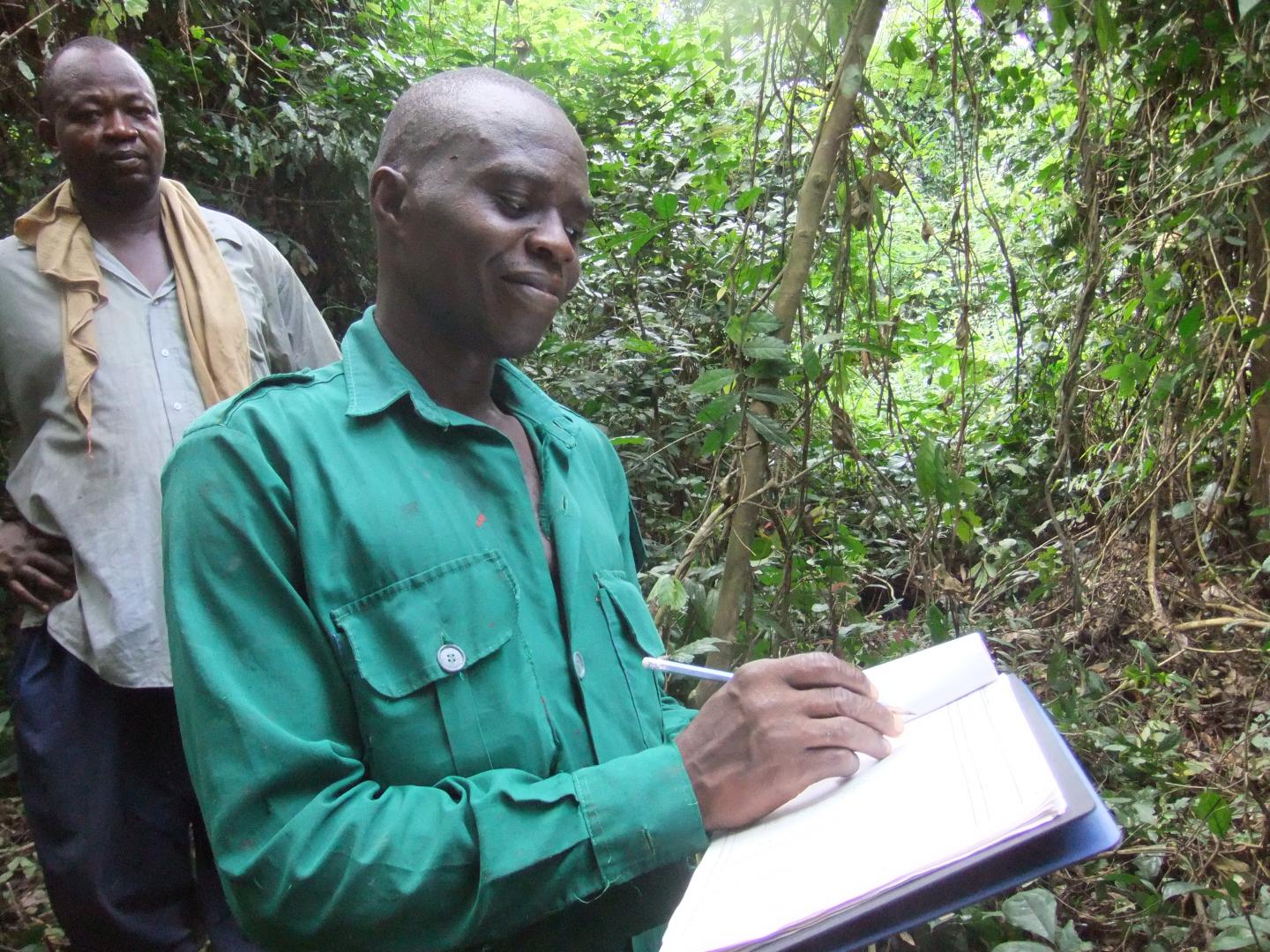 A technician from the Ghana Forestry Commission collects data

Newswise — The ability of the world's tropical forests to remove carbon from the atmosphere is decreasing, according to a study tracking 300,000 trees over 30 years, published today in Nature.

The global scientific collaboration, led by the University of Leeds, reveals that a feared switch of the world's undisturbed tropical forests from a carbon sink to a carbon source has begun.

Intact tropical forests are well-known as a crucial global carbon sink, slowing climate change by removing carbon from the atmosphere and storing it in trees, a process known as carbon sequestration. Climate models typically predict that this tropical forest carbon sink will continue for decades.

However, the new analysis of three decades of tree growth and death from 565 undisturbed tropical forests across Africa and the Amazon has found that the overall uptake of carbon into Earth's intact tropical forests peaked in the 1990s.

By the 2010s, on average, the ability of a tropical forest to absorb carbon had dropped by one-third. The switch is largely driven by carbon losses from trees dying.

The study by almost 100 institutions provides the first large-scale evidence that carbon uptake by the world's tropical forests has already started a worrying downward trend.

Study lead author Dr Wannes Hubau, a former post-doctoral researcher at the University of Leeds now based at the Royal Museum for Central Africa in Belgium, said: "We show that peak carbon uptake into intact tropical forests occurred in the 1990s.

"By combining data from Africa and the Amazon we began to understand why these forests are changing, with carbon dioxide levels, temperature, drought, and forest dynamics being key."

"Extra carbon dioxide boosts tree growth, but every year this effect is being increasingly countered by the negative impacts of higher temperatures and droughts which slow growth and can kill trees.

"Our modelling of these factors shows a long-term future decline in the African sink and that the Amazonian sink will continue to rapidly weaken, which we predict to become a carbon source in the mid-2030s."

In the 1990s intact tropical forests removed roughly 46 billion tonnes of carbon dioxide from the atmosphere, declining to an estimated 25 billion tonnes in the 2010s.

The lost sink capacity in the 2010s compared to the 1990s is 21 billion tonnes carbon dioxide, equivalent to a decade of fossil fuel emissions from the UK, Germany, France and Canada combined.

Overall, intact tropical forests removed 17% of human-made carbon dioxide emissions in the 1990s, reduced to just 6% in the 2010s.

This decline is because these forests were less able to absorb carbon by 33% and the area of intact forest declined by 19%, while global carbon dioxide emissions soared by 46%.

Senior author Professor Simon Lewis, from the School of Geography at Leeds, said: "Intact tropical forests remain a vital carbon sink but this research reveals that unless policies are put in place to stabilise Earth's climate it is only a matter of time until they are no longer able to sequester carbon.

"One big concern for the future of humanity is when carbon-cycle feedbacks really kick in, with nature switching from slowing climate change to accelerating it.

"After years of work deep in the Congo and Amazon rainforests we've found that one of the most worrying impacts of climate change has already begun. This is decades ahead of even the most pessimistic climate models.

"There is no time to lose in terms of tackling climate change."

After the final re-measurement, the study authors used a statistical model and trends in carbon dioxide emissions, temperature and rainfall to estimate changes in forest carbon storage until 2040.

By combining data from two large research networks of forests observations across Africa (AfriTRON) and Amazonia (RAINFOR) the authors show that the Amazon sink began weakening first, starting in the mid-1990s, followed by a waning of the African sink about 15 years later.

The continental difference arises from a combination of Amazon forests being more dynamic than those in Africa, and Amazon forests facing stronger climate impacts. Typical Amazonian forests are exposed to higher temperatures, faster temperature increases and more regular and severe droughts, than African forests.

Dr Hubau, Professor Lewis and their colleagues have spent years travelling to numerous remote field sites, including spending a week in a dug-out canoe to reach Salonga National Park in central Democratic Republic of Congo.

Dr Hubau said: "The ability of forests to slow climate change is a crucial element of understanding how the Earth system functions - particularly how much carbon is absorbed by the Earth and how much is released into the atmosphere.

"Continued on-the-ground monitoring of intact tropical forests is required to track the effects of accelerating environmental change. We need this more than ever, as our planet's last great tropical forests are threatened as never before."

The authors also highlight that tropical forests are still huge reservoirs of carbon, storing 250 billion tonnes of carbon in their trees alone. This storage is equivalent to 90 years of global fossil fuel emissions at today's level.

Study author Professor Bonaventure Sonké from the University of Yaounde I in Cameroon said: "The speed and magnitude of change in these forests suggests that climate impacts in the tropics may become more severe than predicted.

"African countries and the international community will need to seriously invest in preparation for ongoing climate change impacts in tropical regions."

Study author Professor Oliver Phillips, from University of Leeds, added "For too long the skills and potential of African and Amazonian scientists have been undervalued. We need to change this by ensuring their work is properly supported. It will fall to the next generation of African and Amazonian scientists to monitor these remarkable forests to help manage and protect them".

As tropical forests are likely to sequester less carbon than predicted, carbon budgets and emissions targets may need reassessing to account for this.

"In addition, stabilising Earth's climate is necessary to stabilise the carbon balance of intact tropical forests. By driving carbon dioxide emissions to net-zero even faster than currently envisaged, it would be possible to avoid intact tropical forests becoming a large source of carbon to the atmosphere. But that window of possibility is closing fast."

Video and images, along with captions and credits are available for download: https://drive.google.com/open?id=1ebnNhWqAh2SN85AIJIi_y9zh3_KMfhZW

French language version of the press release available on request.

The paper was funded by over 50 grants over two decades, including a European Research Council grant, Tropical forests and the changing Earth system, T-FORCES, to Oliver Phillips and Simon Lewis.

Professor Simon Lewis is listed as one of the world's most highly cited scientists in 2019 (highlycited.com).

The Royal Museum for Central Africa (AfricaMuseum) is a centre for knowledge and resources on Africa in a historical, contemporary and global context. The museum exhibits unique collections, including the World's most important collection of African wood samples, with more than 80,000 specimens belonging to 13,000 different species.

The core endeavours of this Africa-oriented institution consist of conducting scientific research, implementing the results of this research, disseminating knowledge, and mounting selected exhibitions of its collections. Apart from fostering understanding of and interest in Central Africa among the public at large, the museum aims at contributing substantially to Africa's sustainable development through partnerships and research collaborations.

In 2019, the AfricaMuseum hosted and supported more than 100 African trainees, MsC and PhD students, and visiting researchers, including by launching a new wood biology laboratory in the Democratic Republic of the Congo. Located in the Yangambi Biosphere Reserve it will be used by Congolese and international scientists to conduct world-leading research on wood anatomy and dendrochronology (tree-ring dating) to better understand forests' contribution to climate change mitigation and adaptation.

The new AfricaMuseum opened its doors on 9 December 2018, and received more than 350,000 visitors in the course of 2019. Forest ecosystem services and the carbon balance in Central Africa are showcased in the zone dedicated to biodiversity and the "resource paradox". http://www.africamuseum.be/en/home

Caption: A technician from the Ghana Forestry Commission collects data