Troubleshooters Drives the Extra Mile to Vaccinate the Community 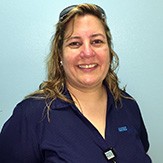 The Troubleshooters Immunization Program has been inoculating children against diseases like mumps and chickenpox for 22 years. In the last five years, the program—part of Harris Health’s School-based Clinic Program—has administered nearly 70,000 vaccinations to about 28,000 children.

Rasmussen, pediatric clerical specialist, and registered nurse LaDonna Burley set up their portable operation of coolers with vaccines and bins filled with forms and documents at various schools, community centers and shopping strips across the county—from Cypress on the northwest, Baytown on the east, Alief in the southwest to Humble in north.

Of course, the busiest time for the duo is during back-to-school season (usually the last three weeks of August and first two weeks of September). At times, long lines of people form outside of scheduled locations awaiting their setup.

Rasmussen has worked at Harris Health for nearly 15 years. Her role includes setting up, greeting families and getting necessary documents, as well consoling children and parents, and sometimes, lending an extra set of hands to hold in place uncontrollable children as they get their shots.

So, is she used to the shrieks and cries of little ones?

“If I’m really busy, I can tune it out,” she says. “But if it’s quiet and I don’t have a lot to do, then I hear it and I feel it in my heart. Then I think it’s just a small pain for something that will protect them for a lifetime.”

For children without a shot record, recent immigrants and even new residents from outside of Texas, the pain and discomfort is multiplied. In many cases, these youngsters may require a full- battery of vaccines (up to eight at a time) to meet public school requirements. The traditional give-away of stickers featuring action heroes and princesses won’t suffice. Fortunately, the pain goes away, but the protection remains. Through vaccinations, many diseases like measles and polio have been nearly eradicated.

Additionally, the team asks parents to consider vaccinating their children (ages 11-12) against the Human papillomavirus (HPV) and Meningococcal B for those aged 16-18. For HPV, the vaccine is offered to boys and girls and is given in two doses—one right away and the other within six months to a year.

Immunizations are offered against:

Over the years, Rasmussen has developed an appreciation for her job and her role in helping the community one child at a time.

“When a parent looks at you and says, ‘thank you,’ you can see they’re very grateful for what we’ve done for them,” she says. “That really makes my day. It makes me want to come back the next day to help someone else again.”