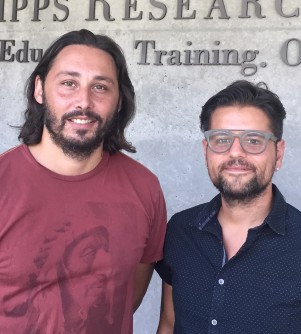 Newswise — LA JOLLA, CA – September 6, 2016 – There may be a way to switch off the urge for compulsive drinking, according to a new study in animal models led by scientists at The Scripps Research Institute (TSRI).

“We can completely reverse alcohol dependence by targeting a network of neurons,” said TSRI Assistant Professor Olivier George, who led the study.

The findings, published in the September 7 issue of The Journal of Neuroscience, built on previous studies showing that frequent alcohol use can activate specific groups of neurons. The more a person drinks, the more they reinforce activation in the neuronal “circuit,” which then drives further alcohol use and addiction. It’s as if the brain carves a special path between alcohol and reward.

For the new study, the researchers investigated whether there was a way to influence only the select neurons that form these circuits. In both humans and rats, these neurons make up only about five percent of the neurons in the brain’s central amygdala.

TSRI Research Associate Giordano de Guglielmo, who was the study’s first author, spearheaded the experiment in rat models of alcohol dependence, which were designed to express a special protein to distinguish only the neurons activated by alcohol. The rats gave the researchers a potential new window into how these circuits form in human brains, where alcohol-linked neurons are harder to identify without the use of protein labels.

The rats were then injected with a compound that could specifically inactivate only alcohol-linked neurons.

George said he was surprised to see these rats completely cease their compulsive alcohol drinking, a change that lasted for as long as the rats were monitored. “We’ve never seen an effect that strong that has lasted for several weeks,” said George. “I wasn’t sure if I believed it.”

The researchers went on run the experiment a second and then a third time. Each time, the rats ceased drinking compulsively.

“It’s like they forgot they were dependent,” said George.

Interestingly, these rats were still motivated to drink sugar water, indicating that the researchers had successfully targeted only alcohol-activated neurons, not the brain’s overall reward system. The rats also appeared to be protected from the negative physical symptoms of alcohol withdrawal, such as shaking.

The new research also shed light on differences in the brain between more casual binge drinking and addictive consumption. In rat models of non-dependent drinking, switching off the alcohol-linked neurons had little effect on future drinking—the brain just seemed to switch on a new group of neurons, as if the brain’s path from alcohol to reward was not established yet.

The researchers said the next step will be to track the formation of alcohol-activated neuronal circuits over time and to find a way to translate this work to humans.

“It is very challenging to target such a small population of neurons in the brain, but this study helps to increase our knowledge of a part of the brain that is still a mystery,” said de Guglielmo.

In addition to George and de Guglielmo, authors of the study, “Recruitment of a Neuronal Ensemble in the Central Nucleus of the Amygdala is Required for Alcohol Dependence,” were Elena Crawford, Sarah Kim, Leandro F. Vendruscolo, Molly Brennan and Maury Cole of TSRI; Bruce T. Hope of the National Institute of Health’s (NIH) National Institute on Drug Abuse (NIDA); and George F. Koob, currently on leave from TSRI to serve as director of the NIH’s National Institute on Alcohol Abuse and Alcoholism (NIAAA).

This study was supported by the NIH (grants AA006420, AA020608 and AA022977), the NIDA Intramural Research Program and the TSRI Pearson Center for Alcohol and Addiction Research.