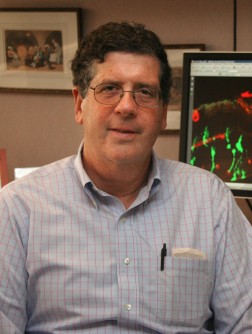 Martin Friedlander is a professor at The Scripps Research Institute.

Newswise — LA JOLLA, CA – April 27, 2015 – A new study from scientists at The Scripps Research Institute (TSRI) shows that nerve cells and blood vessels in the eye constantly “talk” to each other to maintain healthy blood flow and prevent disease.

“It turns out these neurons produce a chemical critical for the survival of blood vessels and the survival and function of photoreceptors—the most important cells for maintaining sight,” said TSRI Professor Martin Friedlander, senior author of the new study.

The study, published online ahead of print in The Journal of Clinical Investigation, has implications for treating diseases such as diabetic retinopathy and age-related macular degeneration—the leading causes of vision loss in adults. Since the eye is often a good model for understanding the workings of the brain, the findings also provide clues to major neurological diseases such as Alzheimer’s.

For such a small organ, the eye is extremely complex. Light enters through the pupil and passes through four layers in the retina before reaching the light-sensitive photoreceptors.

“The retina has a very sophisticated architecture,” said Friedlander. “If you have a little extra fluid, some swelling or a few dead cells, light isn’t going to come through correctly and vision can be impaired.”

The second, intermediate layer of the retinal blood vessels seems to activate during periods of low oxygen and acts as a “reserve” of blood vessels in the retina. When blood flow and oxygen levels are low, a transcription factor called hypoxia-inducible factor (HIF) triggers the production of a chemical called VEGF. The VEGF then prompts new blood vessel growth, bringing more oxygen to the area.

Unfortunately, these new blood vessels can leak blood and other fluids and obscure vision. This is the case with age-related macular degeneration—a “wet” version of which causes vision loss in the center of the eye—and diabetic retinopathy—in which some people with diabetes develop blurry or patchy vision.

A New Role for Neurons

In the new study, the team focused on neurons called amacrine cells and horizontal cells, which have a known role in “preprocessing”—or adjusting—electrical signals transmitted to the brain from the photoreceptors after they have been stimulated by light photons. These cells first caught the researchers’ attention because they appear to wrap themselves around the blood vessels (all together called the vasculature) of the intermediate layer.

To try to find out, in one experiment the researchers “knocked out” the production of VEGF in the amacrine and horizontal cells in mice before they were born. They found that these mice never developed normal blood vessels in the intermediate layer, leading to degeneration of the photoreceptors and severe vision impairment.

This was surprising since previous research had given no clues that these cells were an important source of VEGF.

To track down more clues about the unexpected finding, the scientists set up further experiments to test whether amacrine and horizontal cells really did provide essential VEGF.

Because HIF signals cells to produce VEGF, the researchers wondered whether deleting HIF in amacrine and horizontal cells would also stop the pipeline of VEGF and normal intermediate layer blood vessel development. Indeed, the researchers found that deleting the gene for one form of HIF, called Hif-1α, also led to a lack of blood vessels in this area and subsequent vision problems.

This provided further evidence that VEGF from the amacrine and horizontal cells really does make a difference in blood vessel growth.

For an even better understanding of VEGF production in those cells, the researchers investigated the role of a protein called VHL (von Hippel-Lindau), which normally keeps HIF levels low. After knocking out the gene to produce VHL in amacrine and horizontal cells, the researchers observed high HIF levels, overproduction of VEGF and dangerous blood vessel overgrowth typical of many eye diseases. Finally, they used a technique called genetic ablation to kill the amacrine cells and horizontal cells altogether and found this resulted in a lack of normal vessel growth in the intermediate layer.

Together, the experiments confirmed that neurons and blood vessels in the intermediate layer communicate to keep blood vessels growing normally—striking a balance between providing enough blood and avoiding blood vessel overgrowth.

“This is fascinating,” said Westenskow. “The signals from these cells are fine-tuning this layer of the vasculature.”

A Window into the Brain

Since the retina is a direct extension of the brain and the only place in the body where scientists can easily visualize neurons, blood vessels and other neurological players working together, the study not only has implications for treating vision loss, but also brain diseases such as Alzheimer’s, Parkinson’s and even amyotrophic lateral sclerosis (ALS).

“For example, patients with Alzheimer’s get protein deposits in the brain, and we can see similar deposits in the backs of the eyes of patients who have macular degeneration,” said Friedlander. “If we can better understand what leads to accumulations of these abnormal proteins in the eye, that will hopefully also give us insight into how the brain works.”