Future Treatments Could Bind to Vulnerable Site in Many Viruses 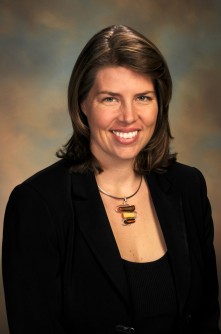 Erica Ollmann Saphire is a professor at The Scripps Research Institute.

Newswise — LA JOLLA, CA – February 26, 2015 –Marburg virus is Ebola’s deadly cousin. The virus is up to 90 percent lethal—and doctors are desperate for tools to fight it.

Now scientists at The Scripps Research Institute (TSRI) have captured the first images showing how immune molecules bind to a site on the surface of Marburg virus. The images are like enemy reconnaissance, showing scientists how to target the virus’s weak spots with future treatments.

The research team is also the first to describe an antibody that binds to both Marburg and Ebola viruses, paving the way for new antibody treatments to fight an entire family of viruses.

“These cross-reactive antibodies are a straightforward route to a therapeutic,” said TSRI Professor Erica Ollmann Saphire, senior author of new study. “You could use these antibodies directly against Marburg virus or—with a bit more engineering—use them to also target Ebola virus.”

Their findings were published February 26 in the journal Cell.

Marburg virus is spread to humans by bats and can cause massive hemorrhaging and organ failure, just like Ebola virus. In 2005, a Marburg outbreak in Angola killed 329 people, mostly children and health-care workers. Some worry Marburg could cause an even bigger outbreak in the future.

“Marburg is just as likely as Ebola to migrate to a densely populated area,” said Saphire.

Marburg Has a Weakness

The new study focuses on an antibody discovered in the blood of a Marburg survivor. By studying how the antibody binds to the virus, the researchers hoped to find new points of attack on Marburg’s surface.

The project was a six-year effort in the Saphire lab. Takao Hashiguchi, a former TSRI research associate, and Marnie Fusco, a TSRI research assistant, figured out how to grow crystals of the antibody attached to its viral target. This crystal was then exposed to X-ray diffraction at the Photon Factory synchrotron in Tsukuba, Japan, revealing its shape in three dimensions.

The team’s work showed how the antibody attaches to Marburg virus, blocking the virus’s ability to bind to a receptor and get its genetic material into human cells. This was also the first time that Marburg’s glycoprotein had been seen in the form it takes as it infects cells.

Could It Fight Ebola Too?

Marburg and Ebola viruses enter cells the same way, so the researchers wondered if the antibody could also inactivate Ebola virus by binding to the same site. The work of TSRI Staff Scientist Zachary Bornholdt showed that it did bind to Ebola—and provided a crystal structure of the same antibody bound to Ebola virus.

The crystal structure also revealed why this cross-reactive antibody was found in a Marburg survivor and not an Ebola survivor, even though the antibody reacts with both viruses. The key was in the flexible, carbohydrate-rich coating on the surface proteins of both viruses. With the help of researchers at the Lawrence Berkeley National Laboratory, the team used a technique called small-angle X-ray scattering to study the carbohydrate-cloaked versions of the Ebola and Marburg proteins.

Their images showed that the carbohydrate-rich regions had different shapes and exposed different surfaces underneath, allowing the body to create an antibody against this exposed region only in Marburg.

The new study was published in Cell with a companion paper, led by researcher James E. Crowe Jr. at Vanderbilt University and co-authored by TSRI Associate Professor Andrew Ward and C. Daniel Murin, a TSRI graduate student. This paper shows low-resolution structures of other antibodies with the potential to bind to the same vulnerable receptor on Marburg virus.

Ward said the two studies give him hope that a cross-reactive antibody treatment could someday be designed to combat related viruses, such as Sudan virus and Bundibugyo virus, which share the receptor. “We need to be prepared for future outbreaks,” said Ward.

“You don’t know which virus is going to break out next,” said Saphire. “This gives us something to work with.”

In addition to Saphire, Hashiguchi, Fusco and Bornholdt, authors of the paper, “Structural Basis for Marburg Virus Neutralization by a Cross-Reactive Human Antibody,” are Jeffrey L. Lee, formerly at TSRI, now at the University of Toronto; Andrew I. Flyak of Vanderbilt University; Rei Matsuoka and Daisuke Kohda of the Photon Factory; Yusuke Yanagi of Kyushu University; Michal Hammel of the Lawrence Berkeley National Laboratory; and James E. Crowe Jr. of Vanderbilt University.