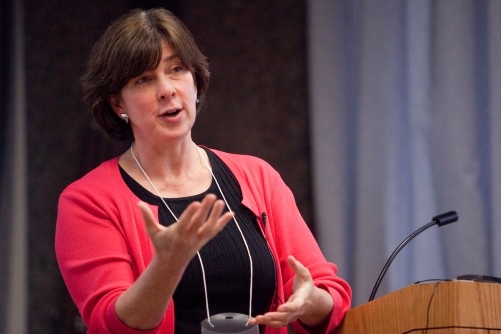 Newswise — BOSTON (Feb. 14, 2018)—Tufts University today named Sarah Booth, Ph.D., the new director of the Jean Mayer USDA Human Nutrition Center for Research on Aging (HNRCA) at Tufts. Booth has served as interim director for the past 15 months and had served as the HNRCA’s associate director since 2009.

The HNRCA at Tufts is one of only six human nutrition research centers in the United States supported by the USDA’s Agricultural Research Service and the largest nutrition center in the country focused on aging. HNRCA research focuses on nutrition and physical activity and their relationship to healthy aging. People age 65 or older made up 15 percent of the United States population in 2014. In 2030, the proportion of older Americans is expected to grow to nearly 21 percent of the U.S. population.

“The Center works to understand how nutrition and exercise can prevent disease and promote healthy and vital aging,” said Booth. “Scientists at the HNRCA are at the forefront of research that directly affects the American public, making contributions to nutritional and physical activity recommendations, public policy, and clinical healthcare. It has been an honor to conduct research here and it will be a greater honor to work with my colleagues to carry our work forward.”

In addition to her role as director of the HNRCA, Booth will continue to serve as senior scientist and director of the HNRCA’s Vitamin K Laboratory. Booth’s main scientific interests include the absorption, transport and metabolism of vitamin K and the role of its metabolism in the prevention of chronic disease, particularly with respect to bone and joint health. She uses research from laboratory studies and human clinical trials to develop an evidence base toward the possibility of setting an estimated average requirement of vitamin K for adults.

“A vital institution like the HNRCA requires a talented director with an inspiring vision. Sarah’s experience at the HNRCA, paired with her strong leadership abilities and her foundation in translational research, make her a perfect match with the position,” said David R. Harris, Ph.D., provost and senior vice president of Tufts University

Booth earned her Ph.D. in nutrition at McGill University and is a member of the American Society for Nutrition. In her new role, Booth succeeds Simin Nikbin Meydani, D.V.M., Ph.D., who became vice provost for research at Tufts. In addition to her extensive work in the fields of nutrition and aging at the HNRCA, Booth has a longstanding affiliation with Tufts and the Friedman School of Nutrition Science and Policy. She will retain her faculty role as professor at the Friedman School at Tufts.

Tufts University, located on campuses in Boston, Medford/Somerville and Grafton, Massachusetts, and in Talloires, France, is recognized among the premier research universities in the United States. Tufts enjoys a global reputation for academic excellence and for the preparation of students as leaders in a wide range of professions. A growing number of innovative teaching and research initiatives span all Tufts campuses, and collaboration among the faculty and students in the undergraduate, graduate and professional programs across the university’s schools is widely encouraged.