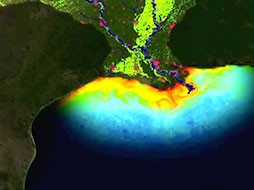 The cash prize will be given to the team that presents the best solution to reduce the amount of nitrogen entering the earth’s waters via fertilizer-laden runoff from farmlands.

Such runoff is a leading cause of hypoxia, a deadly deficiency of oxygen that creates annual “Dead Zones” in the world’s lakes and oceans, killing marine life and threatening the economies of coastal regions, including the Gulf of Mexico.

Hypoxia solutions already submitted to the Challenge, which launched in 2014, will be automatically registered for the grand prize along with new submissions that must register by June 30 at tulane.edu/tulaneprize/waterprize.

Up to five semi-finalists will be selected by November 2016 and provided a plot of farmland in northeast Louisiana to field test their innovation.

The winning entry, which must maintain or increase agricultural yields while reducing nutrient runoff, will be selected by the Challenge Advisory Committee and awarded the grand prize in December 2017.

The Challenge’s grand prize is funded by Phyllis Taylor, president of the Patrick F. Taylor Foundation.

“We are so grateful and applaud Mrs. Taylor for inaugurating the Tulane Nitrogen Challenge and targeting hypoxia, a threat to water regions everywhere,” said Tulane University Challenge Director Rick Aubry.

Supporters of the Tulane Nitrogen Reduction Challenge range from Iowa’s Secretary of Agriculture Bill Northey, at the headwaters of the Mississippi River, to Louisiana’s Agriculture Secretary Mike Strain and include private industry and academic partners around the country.

The Tulane Nitrogen Reduction Challenge is a response to President Obama’s call for more organizations, philanthropists and universities to identify and pursue the Grand Challenges of the 21st century.