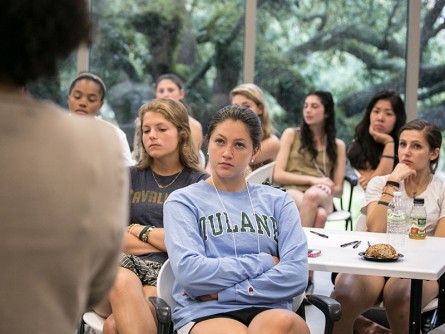 Newswise — Tulane University has received two gifts of $5 million each to recruit top faculty members. The gifts, from two anonymous donors, will establish two Presidential Chairs that will be filled by professors renowned for innovative research and teaching that crosses and combines different fields of knowledge to solve complex societal problems. Tulane President Mike Fitts hopes to eventually establish as many as 10 such professorships, through additional gifts. These pre-eminent faculty will be hired as university-wide professors with joint appointments between schools to research and teach at the intersection of different subjects. "President Fitts’ emphasis on cross-disciplinary research and studies and his efforts to make Tulane's faculty the most renowned anywhere will not only benefit current students but will have a profound effect on shaping the next generation of problem solvers and innovators,” said one of the anonymous donors.  Her fellow donor likewise said he was inspired by President Fitts. “He has laid out a fantastic plan for the continued excellence of Tulane – a plan that is based on having the highest quality professors in the country. Fitts emphasized the transformational nature of the donors’ generosity and noted it will serve Tulane students for generations to come. “An exceptional faculty is the centerpiece of a great university. These gifts will be a boost to Tulane’s growing reputation as one of the nation’s most highly regarded schools," Fitts said. “We are so grateful." “When today’s students graduate they will enter a complex world that will require expertise in a number of fields and disciplines,” he added. “These generous gifts will help these young people bring about real change and progress both as students and citizens of the world.” “To me the No. 1, most important goal in life is education. It is what makes societies grow and improve,” said one of the anonymous donors, who described education and gifts like his in the same way, “the ultimate investment with the highest payoff.”