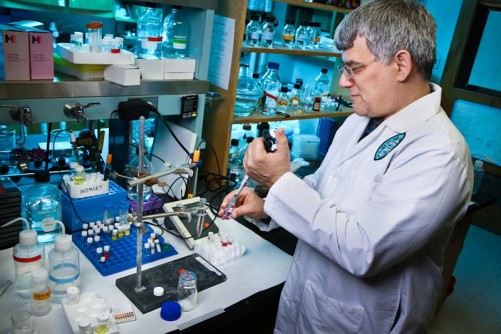 William Wimley is the George A. Adrouny Professor of Biochemistry and Molecular Biology at Tulane University School of Medicine.

Newswise — The world may be closer to knowing why Ebola spreads so easily thanks to a team of researchers from Tulane University and other leading institutions who discovered a new biological activity in a small protein from the deadly virus. The team’s findings were recently published in the Journal of Virology.

The discovery comes as health workers try to contain another Ebola outbreak in a remote area of the Democratic Republic of the Congo. Ebola, which is highly fatal, causes severe vomiting, internal bleeding and extreme gastrointestinal distress.

A compound known as the “delta peptide” is produced in large amounts in Ebola virus-infected patients, but its function isn’t yet known. The investigators tested the effects of purified delta peptide on cells from humans and other mammals and found that it could be a viroporin, a type of viral protein that damages host cells by making the membranes become permeable.

“Our leading hypothesis is that the delta peptide affects the gastrointestinal tract by damaging cells after its release from infected cells,” says William Wimley, George A. Adrouny Professor of Biochemistry and Molecular Biology at Tulane University School of Medicine. “This effect may be a major contributor to the severe GI illness of patients with the Ebola virus.”

During the West African Ebola that began in late 2013, the virus spread rapidly principally because of the presence of the virus in GI fluids.  The lack of effective countermeasures led to the death of more than 11,000 people.

Tulane researchers say the immediate next step is to begin developing therapies that target the delta peptide.

The research involved laboratories from Tulane University School of Medicine, which participated in the fight against Ebola virus on the front lines in Sierra Leone during the outbreak, as well as researchers from Johns Hopkins University and the Louisiana State University Health Sciences Center.