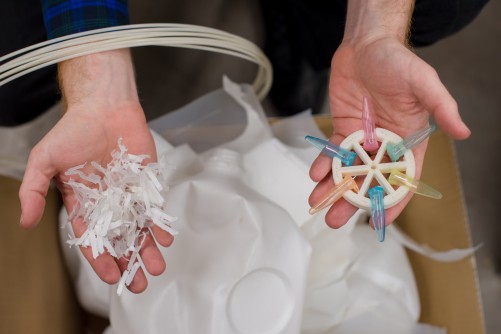 Michigan Tech's Joshua Pearce shredded milk jugs to make raw material for the DremelFuge, right, an attachment for rotary tools that he manufactured with a 3D printer.

Newswise — Suppose you could replace “Made in China” with “Made in my garage.” Suppose also that every time you polished off a jug of two percent, you would be stocking up on raw material to make anything from a cell phone case and golf tees to a toy castle and a garlic press.

And, you could give yourself a gold medal for being a bona fide, recycling, polar-bear-saving rock star.

Michigan Technological University’s Joshua Pearce is working on it. His main tool is open-source 3D printing, which he uses to save thousands of dollars by making everything from his lab equipment to his safety razor.

Using free software downloaded from sites like Thingiverse, which now holds over 54,000 open-source designs, 3D printers make all manner of objects by laying down thin layers of plastic in a specific pattern. While high-end printers can cost many thousands of dollars, simpler open-source units run between $250 and $500—and can be used to make parts for other 3D printers, driving the cost down ever further.

“One impediment to even more widespread use has been the cost of filament,” says Pearce, an associate professor of materials science and engineering and electrical and computer engineering. Though vastly less expensive than most manufactured products, the plastic filament that 3D printers transform into useful objects isn’t free.

Milk jugs, on the other hand, are a costly nuisance, either to recycle or to bury in a landfill. But if you could turn them into plastic filament, Pearce reasoned, you could solve the disposal problem and drive down the cost of 3D printing even more.

So Pearce and his research group decided to make their own recycling unit, or RecycleBot. They cut the labels off milk jugs, washed the plastic, and shredded it. Then they ran it through a homemade device that melts and extrudes it into a long, spaghetti-like string of plastic. Their process is open-source and free for everyone to make and use at Thingiverse.com.

The process isn’t perfect. Milk jugs are made of high-density polyethylene, or HDPE, which is not ideal for 3D printing. “HDPE is a little more challenging to print with,” Pearce says. But the disadvantages are not overwhelming. His group made its own climate-controlled chamber using a dorm-room refrigerator and an off-the-shelf teddy-bear humidifier and had good results. With more experimentation, the results would be even better, he says. “3D printing is where computers were in the 1970s.”

The group determined that making their own filament in an insulated RecycleBot used about 1/10th the energy needed to acquire commercial 3D filament. They also calculated that they used less energy than it would take to recycle milk jugs conventionally.

RecycleBots and 3D printers have all kinds of applications, but they would be especially useful in areas where shopping malls are few and far between, Pearce believes. “Three billion people live in rural areas that have lots of plastic junk,” he says. “They could use it to make useful consumer goods for themselves. Or imagine people living by a landfill in Brazil, recycling plastic and making useful products or even just ‘fair trade filament’ to sell. Twenty milk jugs gets you about 1 kilogram of plastic filament, which currently costs $30 to $50 online.”

Pearce’s research is described in depth in two articles: “Distributed Recycling of Waste Polymer into RepRap Feedstock,” coauthored with Christian Baechler and Matthew DeVuono of Queen’s University and published in the March issue of Rapid Prototyping; and “Distributed Recycling of Post-Consumer Plastic Waste in Rural Areas,” coauthored by Michigan Tech’s Jerry Anzalone, Megan Kreiger, Meredith Mulder and Alexandra Glover, which will appear in the Proceedings of the Materials Research Society.

Proceedings of the Materials Research Society