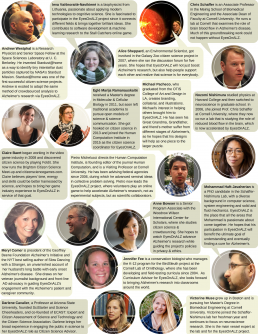 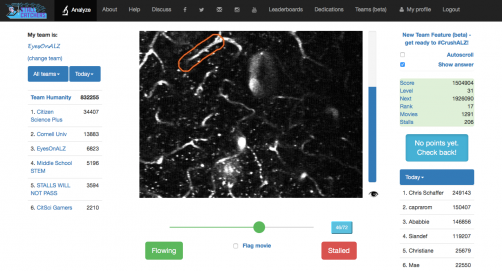 The Crowd and The Cloud

Newswise — EyesOnALZ (http://eyesonalz.com) – a project to crowdsource Alzheimer’s research is launching an online competition to #CrushALZ on April 6th, in partnership with The Crowd & The Cloud – a public television documentary series about citizen science.

The documentary, created by a producer of Carl Sagan's original COSMOS series, shines first light on a growing movement of citizens participating en masse in the advancement of scientific research. The creators of this 4-part mini-series are dedicated to “turning viewers into doers” by encouraging hands-on participation in science.

Stall Catchers (http://stallcatchers.com), developed in the EyesOnALZ project, is the first citizen science game to tackle Alzheimer's disease. EyesOnALZ and Stall Catchers are featured in Episode 1 of The Crowd and The Cloud, which will premier on National Public Television across the US on April 6th, and is available to watch online at http://crowdandcloud.org.

EyesOnALZ founder Pietro Michelucci will kick-off the “#CrushALZ Team Competition” on Stall Catchers during the social media event immediately following the series premiere. This live after-show event will take place at 10PM ET April 6, on The Crowd and The Cloud Facebook page (https://www.facebook.com/crowdandcloudTV/).

Dr. Michelucci will join the live video stream with other subjects of the series, including EyesOnALZ biomedical collaborator Chris Schaffer from Cornell University. The month-long team competition aims to accelerate Cornell’s groundbreaking Alzheimer’s research program, which, according to Dr. Schaffer, “would be impractical without Stall Catchers”.

Any interested organization will be able to create a team on Stall Catchers and compete with other organizations who want to help eliminate Alzheimer’s. The team registration will open up at 6AM ET, April 6 at StallCatchers.com. Instructions on how to set up teams and invite members will be posted on the EyesOnALZ blog (http://blog.eyesonalz.com) that morning.

The most active teams in the competition will receive daily exposure via EyesOnALZ media channels and those of partner organizations. A number of PBS stations, also set to participate in the competition, will invite their local viewers to join forces and #CrushALZ.

According to Dr. Michelucci, a new Alzheimer’s dataset has been loaded into Stall Catchers just for the competition: “Normally it would take a year for Cornell to analyze these data, but with the momentum of the documentary, we hope to enlist the help of millions of viewers to answer a key research question that will help us leap forward toward a treatment.”

Players’ collective progress toward answering the research question will be reported throughout the competition. Dr. Michelucci plans to reveal the potential impact of this research question during the after-show event. “If all goes well, in one month we will have our answer and move on to the next question.”

Human Computation Institute (HCI) is dedicated to advancing the science of crowd-powered systems for the betterment of humanity. For more information visit http://humancomputation.org.

EyesOnALZ is a citizen science project that crowdsources Alzheimer's disease research by turning traditional laboratory data analysis into an online game that anyone can play. EyesOnALZ was created by Human Computation Institute in partnership with Cornell University, University of California at Berkeley, and Princeton University.  It is funded by the BrightFocus Foundation, a non-profit organization that supports research and promotes awareness to end Alzheimer’s disease, macular degeneration and glaucoma. 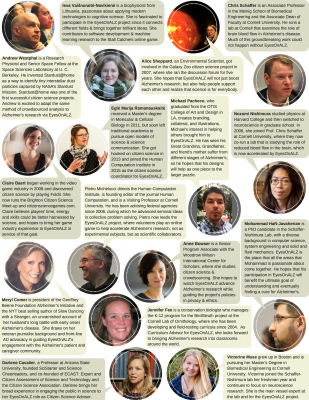 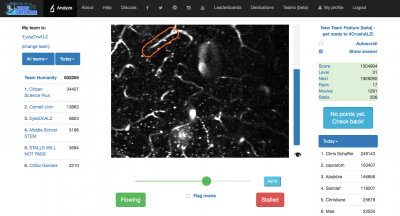