21-Nov-2011 8:00 AM EST, by Salk Institute for Biological Studies
favorite_border 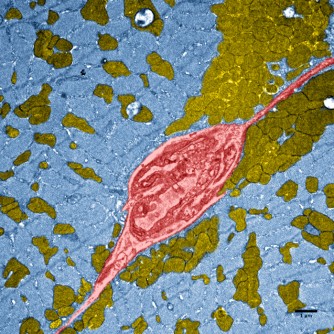 This image shows dramatically enhanced muscle tissue in a high performing mouse, which has greater numbers of mitochondria (brown), the energy factories of cells. Through genetic engineering, the mouse developed stronger muscles than normal, even though it was inactive. In the image, a blood vessel (seen in cross section) is red and muscle fibers are blue

Salk scientists and their collaborators find new avenue for treating muscle degeneration in people who can't exercise Newswise — La Jolla ---- An international team of scientists has created super-strong, high-endurance mice and worms by suppressing a natural muscle-growth inhibitor, suggesting treatments for age-related or genetics-related muscle degeneration are within reach. The project was a collaboration between researchers at the Salk Institute for Biological Studies, and two Swiss institutions, Ecole Polytechnique Federale de Lausanne (EPFL) and the University of Lausanne. The scientists found that a tiny inhibitor may be responsible for determining the strength of our muscles. By acting on a genome regulator (NCoR1), they were able to modulate the activity of certain genes, creating a strain of mighty mice whose muscles were twice a strong as those of normal mice. "There are now ways to develop drugs for people who are unable to exercise due to obesity or other health complications, such as diabetes, immobility and frailty," says Ronald M. Evans, a professor in Salk's Gene Expression Laboratory, who led the Salk team. "We can now engineer specific gene networks in muscle to give the benefits of exercise to sedentary mice." Johan Auwerx, the lead author from EPFL, says molecules such as NCoR1 are molecular brakes that decrease the activity of genes. Releasing the brake by mutation or with chemicals can reactivate gene circuits to provide more energy to muscle and enhance its activity. In an article appearing last week in the journal Cell, the Salk researchers and their collaborators reported on the results of experiments done in parallel on mice and nematodes. By genetically manipulating the offspring of these species, the researchers were able to suppress NCoR1, which normally acts to inhibit the buildup of muscle tissues. In the absence of the inhibitor, the muscle tissue developed much more effectively. The mice with the mutation became true marathoners, capable of running faster and longer before showing any signs of fatigue. In fact, they were able to cover almost twice the distance run by mice that hadn't received the treatment. They also exhibited better cold tolerance. Unlike previous experiments that focused on "genetic accelerators" this work shows that suppressing an inhibitor is a new way to build muscle. Examination under a microscope confirmed that the muscle fibers of the modified mice are denser, the muscles are more massive, and the cells in the tissue contain higher numbers of mitochondria ---- cellular organelles that deliver energy to the muscles. Similar results were also observed in nematode worms, allowing the scientists to conclude that their results could be applicable to a large range of living creatures. The scientists have not yet detected any harmful side effects associated with eliminating the NCoR1 receptor from muscle and fat tissues. Although the experiments involved genetic manipulations, the researchers are already investigating potential drug molecules that could be used to reduce the receptor's effectiveness. The researchers say their results are a milestone in our understanding of certain fundamental mechanisms of living organisms, in particular the little-studied role of corepressors ---molecules that inhibit the expression of genes. In addition, they give a glimpse at possible long-term therapeutic applications. "This could be used to combat muscle weakness in the elderly, which leads to falls and contributes to hospitalizations," Auwerx says. "In addition, we think that this could be used as a basis for developing a treatment for genetic muscular dystrophy." He added that if these results are confirmed in humans, there's no question they will attract interest from athletes as well as medical experts.