The Children’s Hospital of Philadelphia

Newswise — Philadelphia, Oct. 6, 2017 – The Philadelphia Pediatric Medical Device Consortium (PPDC) has announced its latest round of seed grants to companies developing medical devices for children. The Consortium chose two companies from eight finalists in a competition to receive seed grants of $50,000 each.

The devices are a speech generating system that allows hospitalized children who cannot speak to communicate to clinicians, and a handheld scanner to detect intracranial bleeding in children, without using radiology.

Funded by the U.S. Food and Drug Administration and based at Children’s Hospital of Philadelphia (CHOP), the PPDC provides know-how and seed funding to help innovators translate promising ideas into commercial medical devices for use in children. The PPDC is a collaboration among CHOP, Drexel University and the University of Pennsylvania. For the second year in a row, the PPDC partnered with the Childress Institute for Pediatric Trauma to fund a device that can be used during the so-called “golden hour of care” immediately following a traumatic injury.

The new round of awards is the fourth by the PPDC, following seed grants announced in February 2015, January 2016, and January 2017.

“We are very excited to once again provide these awards to innovators of medical devices for kids, and grateful to our partners at the Childress Institute for their matching funds,” said engineer Matthew R. Maltese, PhD, of Children’s Hospital of Philadelphia, the Consortium’s executive director and principal investigator.

Voxello, LLC of Coralville, Iowa, is developing the noddle™ to address the communication barriers faced by pediatric patients. The noddle™ uses patented technology to detect the smallest intentional gesture and allow patients to access the nurse call system and control a speech generating device. Thus, children who may only be able to produce a tongue click, head nod or other small gesture would be able to summon help and effectively communicate with their caregivers. PPDC funding will be used to support further development and clinical trials of the Voxello technology with hospitalized children, as well as children with developmental disabilities whose barriers to communication may impact their care and medical outcomes.

The second seed grant, supported by the Childress Institute, will go to InfraScan, Inc. of Philadelphia for the Infrascanner™.  The Infrascanner™ is a portable screening device that uses near-infrared technology to screen patients for intracranial hematomas, identifying those who would most benefit from immediate referral to a CT scan and neurosurgical intervention. The Infrascanner™ will act as a cost-effective, mobile, and time-efficient complement to current CT scan systems. PPDC funding will support a clinical study for the pediatric FDA clearance of the Infrascanner™ Model 2000.

The fifth round of PPDC funding opportunities began in September. Applications are accepted from throughout the U.S. and from foreign companies. The Consortium also accepts applications year-round for in-kind services and expert advice.

For more information on the PPDC, visit www.phillypediatricmeddevice.org

About Children’s Hospital of Philadelphia: Children’s Hospital of Philadelphia was founded in 1855 as the nation’s first pediatric hospital. Through its long-standing commitment to providing exceptional patient care, training new generations of pediatric healthcare professionals and pioneering major research initiatives, Children’s Hospital has fostered many discoveries that have benefited children worldwide. Its pediatric research program is among the largest in the country. In addition, its unique family-centered care and public service programs have brought the 546-bed hospital recognition as a leading advocate for children and adolescents. For more information, visit http://www.chop.edu. 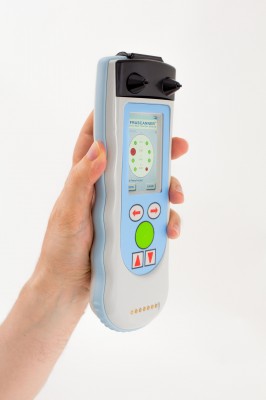 Caption: The Infrascanner is a portable screening device to screen patients for intracranial bleeding, without using radiology. 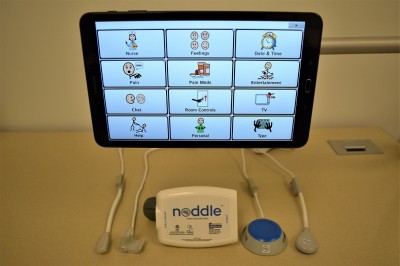 Caption: The noddle is a speech generating system for hospitalized children.