Suggested causes: pollution of water sources, radiation changes and the effects of a dwindling population 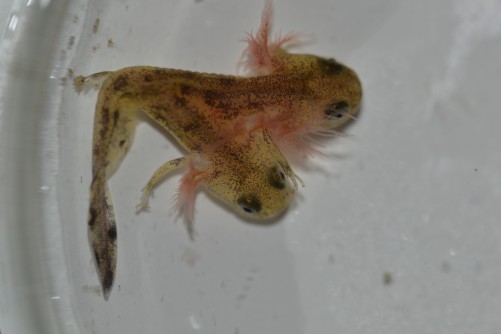 Newswise — In the Community Ecology Lab, headed by Prof. Leon Blaustein, researchers have found a salamander tadpole which has two heads. Researchers at the lab, Dr Ori Segev and Antonina Plavikov, noted that while they had observed an incidence of deformity, especially among the limbs of salamanders, in the past such cases of two heads were more rare. The reason for this deformity is unknown, but the chief theories are pollution of water sources, changes in radiation and the influence of a small population.

The Salamander of Israel is an endangered species, mainly due to factors which have disturbed its habitat such as soil and water pollution and the destruction of its natural habitat. Prof. Blaustein’s lab has been conducting research for many years to try to understand the biological mechanisms of this unique life form, with the aim of helping the nature and parks authorities maintain the existing population and revive populations in danger.

According to researchers at the lab the salamanders act as a signal for the general health of the environment, because they are so sensitive to pollution and environmental changes and so they are the first to be harmed.

Below is a link to a short video clip of the two-headed salamanderhttps://www.dropbox.com/s/ssc0jhtv23pzlb0/2Heand.mp4?dl=0