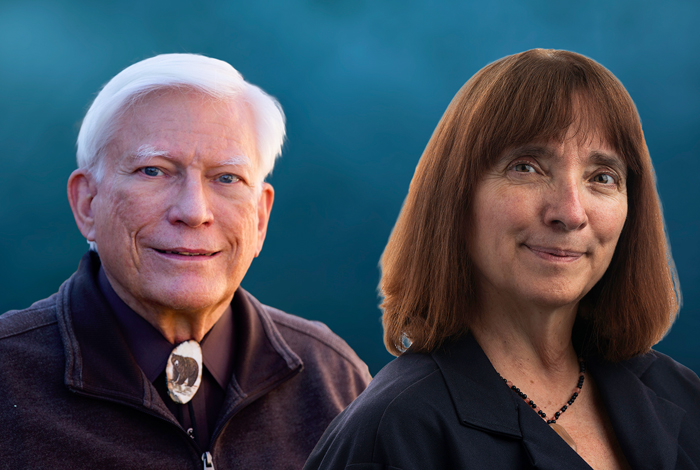 Fred Mortensen (left) and Bette Korber are recipients of the Los Alamos Medal.

Newswise — LOS ALAMOS, N.M., Feb. 9, 2021—Los Alamos National Laboratory announced today that two scientists have been awarded the Los Alamos Medal, the Laboratory’s highest honor, for revolutionary scientific contributions to national security and science. Fred Mortensen and Bette Korber are recognized for their distinguished achievements that have enhanced the success of the Laboratory.

“Throughout their careers, Fred and Bette have made significant impacts to the success of the Laboratory and helped make the world a safer, better place,” said Thom Mason, director of Los Alamos National Laboratory. “Stockpile stewardship would not be where it is today without Fred’s contributions, and Bette’s work in vaccine design is unparalleled. I am proud that these exceptional individuals work at our Laboratory.”

Fred Mortensen, now retired, is an E. O. Lawrence Award recipient, the Department of Energy's highest award for scientific achievement, who began his career at Los Alamos in the Theoretical Design Division in 1972. During his first 20 years at the Laboratory, he contributed to the physics design of 18 nuclear tests. Mortensen played an essential role in the design of three of the seven systems in the U.S. nuclear weapons stockpile; these designs account for more than two-thirds of the total number of weapons.

For more than 25 years, the Laboratory has been able to certify weapons performance using laboratory-scale experiments and numerical simulations without resorting to nuclear testing. This would not have been possible without the certification methodology that Mortensen developed shortly before the end of nuclear testing. Mortensen’s approach, which ultimately served as a cornerstone for the Stockpile Stewardship and Advanced Strategic Computing Programs, focused on the ability to simulate the details of physical experiments.

Bette Korber, of Los Alamos’ Theoretical Division, joined the Laboratory in 1991 and has spent her career understanding viral evolution and vaccine design, propelling her to become a global leader in these fields. Korber is also an E. O. Lawrence Award recipient. Some of her most innovative work has been in developing computational vaccine design strategies to enable vaccine responses that, at least in animal models, can protect against highly diverse viruses like HIV, hepatitis C, influenza, and filoviruses.

Korber’s response to the COVID-19 pandemic has been immediate and impactful. She led a team of Los Alamos scientists that rapidly developed a computational pipeline to automatically process and analyze the hundreds of thousands of SARS-CoV-2 sequences submitted by international investigators to GISAID. A global database, GISAID provides open access to genomic data of the virus responsible for the COVID-19 pandemic. Using these data, Korber and her team identified a mutated form of the virus that was more readily transmitted than the ancestral from; this variant rapidly became the most dominant form worldwide.

An awards ceremony to recognize the recipients will be held at the end of the year.