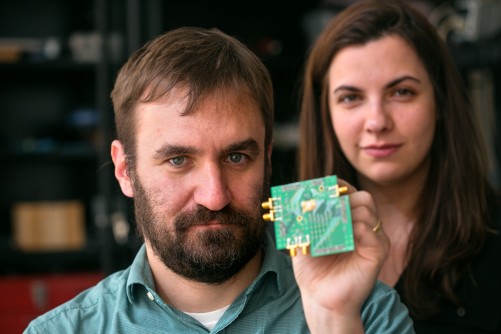 Cornell professor Al Molnar, holding a test board with the two-way transceiver chip mounted in the center, is shown with graduate student Hazal Yüksel in Molnar's lab. Yüksel is co-lead author of the latest paper from the Molnar lab, published earlier this year in the Journal of Solid-State Circuits.

Newswise — ITHACA, N.Y. – Cornell University engineers have devised a method for transmitting and receiving radio signals on a single chip, which could ultimately help change the way wireless communication is done.

Separating the send and receive bands is difficult enough, but the problem is compounded by the ever-increasing number of bands in the latest devices, which handle everything wireless technology has to offer. From GPS to Bluetooth to Wi-Fi, each band requires a filter to stop the strong transmit signals from drowning out reception.

Alyosha Molnar, associate professor of electrical and computer engineering (ECE), and Alyssa Apsel, professor of ECE, have come up with an ingenious way to separate the signals. Their work is described in “A wideband fully integrated software-defined transceiver for FDD and TDD operation,” published online in the Institute of Electrical and Electronics Engineers’ Journal of Solid-State Circuits.

Their idea lies in the transmitter – actually a series of six subtransmitters – all hooked into an artificial transmission line. Each of the subtransmitters send signals at regular intervals, and their individually weighted outputs are programmed so that they combine to produce a radio frequency signal in the forward direction, at the antenna port, while canceling out at the receive port.

The programmability of the individual outputs allows this simultaneous summation and cancellation to be tuned across a wide range of frequencies, and to adjust to signal strength at the antenna.

“You put the antenna at one end and the amplified signal goes out the antenna, and you put the receiver at the other end and that’s where the nulling happens,” Molnar said. “Your receiver sees the antenna through this wire, the transmission line, but it doesn’t see the transmit signal because it’s canceling itself out at that end.”

This work builds on research reported six years ago by a group from Stanford University, which devised a way for the transmitter to filter its own transmission, allowing the weaker incoming signal to be heard. It’s the theory behind noise-canceling headphones.

Unlike the Stanford work, the Cornell group’s subtransmitter concept will work over a range of frequencies – a positive in this age of scrambling for available frequencies that used to be the realm of over-the-air television.

“This wire is a fairly broadband structure,” Molnar said. “And the thing you do to make it work over a wide range of frequencies is just control those different subgains of the transmitters to make this cancellation always happen.”

Instead of needing a filter for every band, signal separation can be controlled digitally. Upgrading to the latest version would be like updating an app – as simple as downloading the latest software.

Financial support for this work came from the Defense Advanced Research Projects Agency.