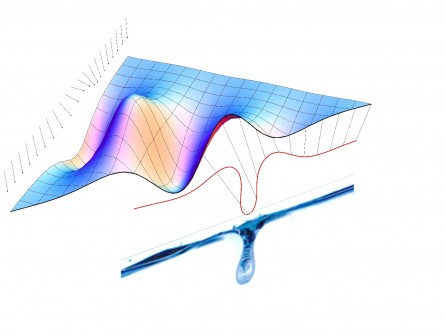 The colored surface at top charts the oscillating angles of a coupled line of swinging pendulums. The red curve, constructed from this chart, has the mathematical shape of a folding film floating on a liquid, as illustrated by the experimental film shown in blue below the curve. 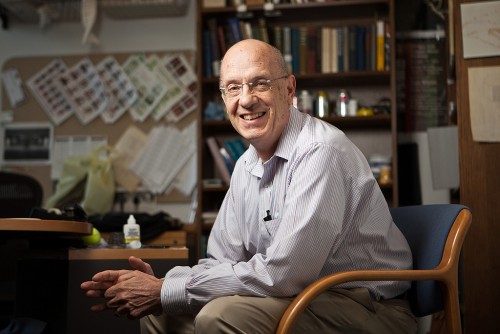 Thomas Witten, the Homer J. Livingston Professor in Physics at the University of Chicago. 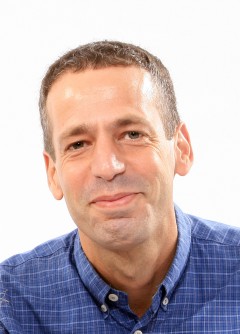 Newswise — A coupled line of swinging pendulums apparently has nothing in common with an elastic film that buckles and folds under compression while floating on a liquid, but scientists at the University of Chicago and Tel Aviv University have discovered a deep connection between the two phenomena.

Energy carried in ordinary waves, like those seen on the ocean near a beach, quickly disperses. But the energy in the coupled pendulums and in compressed elastic film concentrates into different kinds of waves, ones with discrete packets of energy called “solitons.”

Solitons express themselves in other realms as well. In telecommunications, for example, pulsing light travels as solitons through optical fibers. “What is special about solitons, and this very special way of localizing energy, is that it does not disperse,” said Haim Diamant, associate professor of chemistry at Tel Aviv University. “It remains a very well-defined, focused packet.”

The connection, which Diamant and UChicago’s Thomas Witten will report Oct. 14 in the journal Physical Review Letters, is subtle and more easily appreciated in visual form (see graphic at right). Witten graphed the swing angle of the pendulums as time progresses. Then he made a curve whose angle with the horizontal varies to match the swing angles along the diagonal edge of the graph. The resulting curve takes the same shape as the profile of a folded elastic film floating on a liquid, like the film shown at the bottom of the picture.

Witten and Diamant began collaborating while the latter worked at UChicago’s James Franck Institute as a postdoctoral scientist from 1999 to 2002. They have been working together on puzzles emerging from the laboratory of another collaborator, Ka Yee Lee, UChicago professor in chemistry, ever since. Lee’s research group studies the complex mixture of lipids and proteins that lines the sacs of the lung. These molecular linings fold and unfold as we inhale and exhale; the folding appears important for normal breathing.

Slowly growing energy The energy applied to the film’s deformation starts out weak, then grows stronger. Once the wrinkling energy in the film grows stronger, it concentrates itself into a fold shaped like the folding curve in the figure. Though the fold appears in a specific place on the film, “the motion resulting from folding extends over a big region. Usually big things are slow,” said Witten, the Homer J. Livingston Professor in Physics. “But this is a big thing that is not slow. It’s a rapid jerk, and we want to see what enables such rapid, large-scale motion.”

Lee and her associates aim to understand breathing mechanics using synthetic films only one layer of molecules thick to simulate the surfactant that lines the microscopic air sacs found in the lungs. Diamant and Witten sought to solve the equation that exactly describes the fold shape of such a film. They knew it would be a difficult task, given that it was a nonlinear equation, one in which simple changes produce complicated effects.

These hints had appeared in numerical simulations of the folding process generated by Enrique Cerda, a collaborator at the University of Santiago in Chile. “It was a miracle that we found an exact solution, but we had a strong feeling that it existed,” Diamant said. Once Diamant and Witten solved the problem, they realized that the solution resembled the sine-Gordon equation, well-known among mathematicians and physicists, which describes how a coupled line of swinging pendulums concentrate their energy. Their resulting paper lays out the first example the authors know of in which soliton motion of a dynamical system can help scientists understand material deformation. The materials in this instance involve a thin, rigid layer floating on a fluid surface, a structure commonly found in biological tissues and synthetic coatings.

The finding has still-undetermined technological or biomedical applications, but it offers a way to control the film’s deformation, including making the fold stick down into or up out of the water, forming a groove.

“This groove is controllable,” Witten said. “You can shape the groove; you can make it come; you can make it go away.” One also could control the location of the groove on the film, making it possible to manipulate the film on the scale of a few microns — a fraction the width of a human hair.

“If there was some other material in the water that was attracted to the surface, we could make it nestle into this shape and we could capture it,” Witten explained. “We think that this shape could have some potential that people don’t realize.”

As a next step, Diamant and Witten wonder if the dynamics of swinging pendulums can tell them anything about the dynamics of a folding elastic film. “All we have described at the moment is this static shape of the fold, but folding too is a dynamic phenomenon,” Witten said.

Squeeze the film, and it will begin to fold after a period of time. Witten and Diamant would like to further describe how that process works based on what the swinging pendulums do.

“It seems only natural, but things like that are dangerous and they don’t necessarily work,” Witten noted. “But we do know that there is a lot known about the solitons that we can potentially harness to understand the folds. 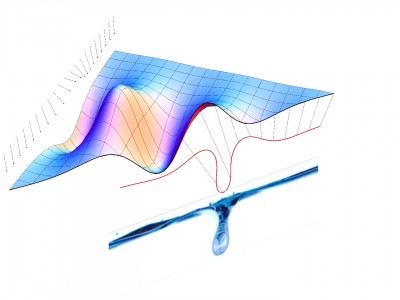 Caption: The colored surface at top charts the oscillating angles of a coupled line of swinging pendulums. The red curve, constructed from this chart, has the mathematical shape of a folding film floating on a liquid, as illustrated by the experimental film shown in blue below the curve. 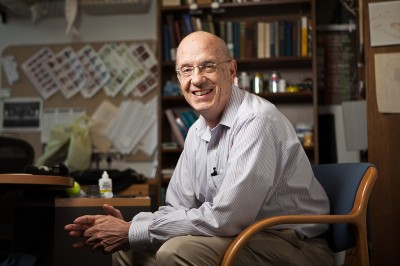 Caption: Thomas Witten, the Homer J. Livingston Professor in Physics at the University of Chicago. 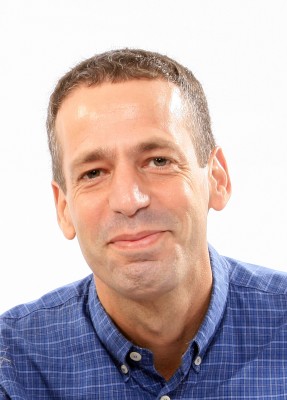