2018 Humana Festival to feature department faculty and student, simultaneously for the first time 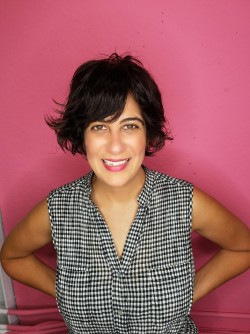 Deborah Stein, a playwriting professor in the Department of Theatre and Dance, and MFA student Mara Nelson-Greenberg are each featured. Organized by Actors Theatre of Louisville, the 42nd annual Humana Festival takes place Feb. 28 – April 8 in Louisville, Ky.

“It is rather unprecedented to have a faculty member and a graduate student from the same playwriting program in one of the most significant festivals in the country,” said Department of Theatre and Dance chair Charles Means. “We are incredibly proud of Deborah and Mara, both for this achievement and for representing our world-class department with such strength and creativity.”

The world-renowned festival has historically introduced more than 450 plays to the public, and 2017’s event was attended by more than 36,000 people from 39 states and 57 colleges and universities. Seven Humana Festival plays have won the Obie Award and three have gone on to win the Pulitzer Prize.

Additionally, Stein’s play “Marginal Loss” will see its world premiere at the festival, opening March 6 and running through April 8. This is her fourth Humana Festival play, following “Brink!” in 2009 and “Fissures (lost and found)” and “HEIST!” in 2010.

“Actors Theatre of Louisville has been an artistic home for over 10 years; even before I had a play produced there, the kind letters from their literary office were an encouragement to keep going,” Stein said. “Their commitment to supporting diverse and innovative theatre-making processes is unparalleled. The only other theater of their size that consistently takes such risks is our own La Jolla Playhouse.”

Stein’s previous works produced at the festival were co-written, however this year marks the first time a play written by her alone has been selected. What’s more, the play will be shown on the festival mainstage, a high honor for playwrights.

“It is especially sweet, after such a long association, to be returning. And this time, it’s not a collaboration. It both feels like a homecoming and also a significant step forward for my career,” she said.

A playwright and director, Stein is co-artistic director of Stein │ Holum Projects, a collaborative laboratory for creating new performances where she wrote and co-directed award winners “The Wholehearted” and “Chimera.” Creative projects at UC San Diego include co-creating and directing “The Bitter Game” by MFA alumnus Keith Wallace for the La Jolla Playhouse, and the 2016 production of “Movers + Shakers.”

Part of the festival’s Brown-Forman Series, “Marginal Loss” is being directed by UC San Diego alumna Meredith McDonough, who received her MFA in directing from the Department of Theatre and Dance in 2004. McDonough is the associate artistic director of Actors Theatre.

“Our Department of Theatre and Dance is amazing,” Stein said. “The deep bench of talent and vision amongst the faculty, alumni and current students is first-rate. It’s why I left New York three years ago.”

Nelson-Greenberg’s comedy “Do you Feel Anger?” will be directed by Margot Bordelon and runs March 9 – April 8, 2018. It will be the MFA student's first major production.

“I am unbelievably excited to be a part of the Humana festival this year, especially alongside Deborah, and I couldn't be happier to be going through this experience while I'm at UC San Diego,” Nelson-Greenberg said. “The faculty and my peers have been extraordinarily supportive and I am grateful to have such smart, thoughtful and generous people surrounding me as I navigate a lot of ‘firsts.’”

A first-year MFA playwriting student in the Division of Arts and Humanities, Nelson-Greenberg has multiple theater credits and is a member of Youngblood at Ensemble Studio Theatre. Affiliated with Clubbed Thumb’s Early Career Writers’ Group, she co-wrote the 2016 web series “End Times Girls Club.” At UC San Diego, she studies under Stein and playwriting faculty members Naomi Iizuka and Allan Havis.

The Humana Festival of New American Plays is underwritten by the Humana Foundation, with additional support from the National Endowment for the Arts and Harold and Mimi Steinberg Charitable Trust. The annual festival has made a significant impact on the national theater landscape, and is recognized as a crucial incubator and launching pad for groundbreaking, new work, festival organizers said.

“The Humana Festival of New American Plays is a leading force in today’s theatre. Our writers explore and define the world that we all share,” said Les Waters, Actors Theatre artistic director and UC San Diego Department of Theatre and Dance emeritus faculty member, in a release.