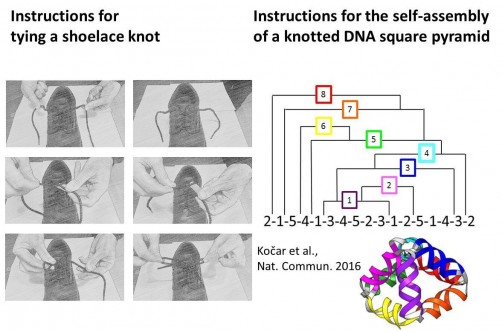 Humanity has known and applied knots since the prehistoric times. Knots are used from securing the ships to the manufacture of textiles and art. From our everyday life we know that tying the knot requires a precise order of crossing ends of the rope, such as in tying shoelaces or knitting socks. Some natural molecules form knots, but usually they include a small number of chain cross-overs. Researchers of the National Institute of Chemistry of Slovenia, led by prof. Roman Jerala report the discovery of the method for the design and preparation of highly knotted molecular structures which comprises more than 30 cross-overs1. Unlike manual tying of knots in everyday life, molecules should be designed to fold spontaneously into the desired nanoscale knotted structure. This can be achieved by incorporating the information about desired order of chain crossing into the sequence of the smart polymeric molecule. Deoxyribonucleic acid (DNA), which normally contains the hereditary information, can also be used as the smart material for constructing complex nanostructures, where the structure is encoded by the complementary Watson-Crick base pairs. DNA nanostructures typically self-assemble by slow cooling of a mixture of many chemically synthesized DNA chains, which is not very convenient for scaling up for technological applications, especially for medical or biotechnological. Researchers now defined the rules that allow the DNA to knot into the desired cage-like shapes through defined order of steps. They discovered that at each stage at least one end of the chain has to remain free, so that it can be threaded through the existing loops of the emerging structure. Vid Kočar, a PhD student and the first author of the publication designed a knotted square pyramid consisting of a single chain DNA that was produced by the enzymatic synthesis. The optimal design folded very quickly into a knotted square pyramid cage with edges of 5 nm, even upon the rapid transfer from 95°C to the liquid nitrogen. Mathematicians participating in the study proved that a DNA sequence that complies with the free end rule can always be designed. Coarse grained simulations based on the oxDNA by the researchers from the University of Oxford calculated the rates for each folding step and identified the folding bottlenecks which have to be avoided in the optimal design. The authors believe that the main use of the design of molecular knots lies in the designed modular protein structures, such as their previously reported protein tetrahedron2. As the knots are very useful in the technology we can expect applications of molecular knots for designed smart nanomaterials with increased stability and other interesting properties.