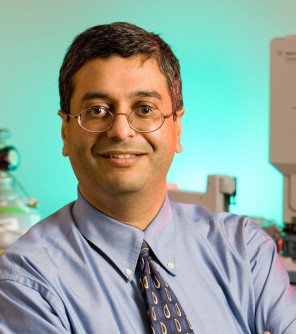 Newswise — A diagnosis of Idiopathic Pulmonary Fibrosis is not much better than a death sentence: there is no treatment and the survival rate is less than three years.

But researchers at the University of Michigan have discovered that targeting of a novel gene utilizing genetic and pharmacologic strategies was successful in treating pulmonary fibrosis in mice and will be developed for future testing in humans.

The treatments attack an oxidant-generating enzyme, NOX4, that researchers discovered is involved in the fibrotic process — which involves scar-like tissue formation in an organ such as the lung. The researchers’ findings will be published in the September issue of the journal Nature Medicine.

“We’ve identified the target. We know the enemy now,” said Subramaniam Pennathur, M.D., assistant professor of internal medicine/nephrology. “This is the first study that shows pulmonary fibrosis is driven by this NOX4 enzyme.

“But what’s really significant is this discovery may have relevance to fibrosis in other organ systems, not just the lung.”

So those suffering from common cardiac or kidney diseases, which often involve fibrosis, also may benefit from treatments stemming from this research, Pennathur said.

Pennathur said continued support from the National Institutes of Health will eventually allow researchers to take the treatment to human studies. The University of Michigan also has filed for patent protection and is currently looking for a licensing partner to help bring the technology to market.

The discovery was made in the University of Michigan lab of Victor J. Thannickal, M.D. He was assisted by Louise Hecker, Ph.D., a post-doctoral research fellow.

Thannickal said the study points to a very viable treatment strategy for idiopathic pulmonary fibrosis, and researchers saw success both in mouse models of lung fibrosis and in fibrogenic cells isolated from lungs of patients with Idiopathic Pulmonary Fibrosis.

“It remains to be seen if fibrosis is reversible,” he said. “But therapeutic targeting of this pathway this may allow us to halt the progression of fibrosis and preserve lung function.”

The lung disease often affects older people, Thannickal said, and its cause is generally unknown. It is possible that cumulative injuries like exposure to environmental toxins and pollutants in genetically susceptible individuals could contribute to causing fibrosis.

There is a gradual scarring of the lung, thickening and contracting the organ until it loses its ability to exchange oxygen with blood, Hecker said. Patients experience extreme fatigue, rapid weight loss, chronic cough and shortness of breath.

When U-M researchers induced the fibrotic process in the mice, they discovered that the NOX4 enzyme was elevated. By knocking down that enzyme at the genetic level or inhibiting its activity, the fibrosis was stopped, Hecker said.

“So we may be able to halt lung scarring even after the injury has occurred and fibrosis is set in motion,” she said. “This research provides proof of concept that we can target this pathway for therapeutic benefit, which could potentially be used in humans.”

Both Hecker and Thannickal left U-M this summer for the University of Alabama at Birmingham, but they plan to continue to work with Pennathur and other U-M researchers on anti-fibrotic therapies based on these studies. The patent will stay with U-M.