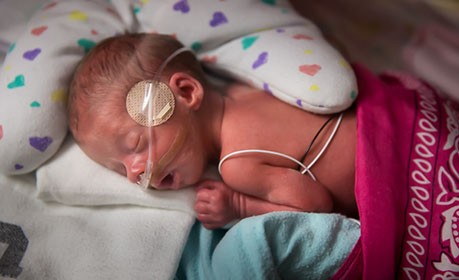 Doctors at University of Utah Hospital will soon be able to diagnose and begin treating critically ill infants based on rapid genome sequencing technology. 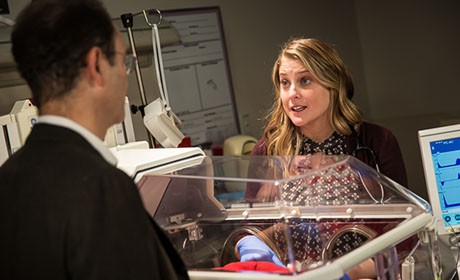 Sabrina Malone Jenkins, MD, says receiving results from genetic testing within 72 hours could be life-changing for many of the infants she treats in NICU.

Newswise — University of Utah Health today announced the launch of a project with a goal of quickly and accurately detecting genetic disorders among newborns in its neonatal intensive care unit (NICU). Clinicians believe that bringing precision medicine to the NICU will transform neonatal care, leading to better diagnosis and treatment of critically ill infants with genetic-related diseases while lowering medical costs and easing the emotional and financial burden on parents and families.

With this project, U of U Hospital will join Primary Children’s Hospital, also in Salt Lake City, as being part of a small group of hospitals worldwide to offer this type of advanced care.

The multidisciplinary project team, which includes U of U Health pediatric specialists, neonatal physicians, and bioinformatic genomics scientists, will use rapid whole genome sequencing (rWGS) to identify genetic mutations suspected of causing disease.

“Rapidly getting information about the genetics involved will help us better diagnose and plan the best treatments for these babies,” says Sabrina Malone Jenkins, M.D., a neonatologist and a U of U Health assistant professor of pediatrics. “It allows us to personalize our care in the NICU. Not only does it provide information to the clinician but it also provides an answer to parents of ‘why is this happening and what can we expect?’ This type of testing is the future of clinical care in the NICU.

Nearly half of all newborns treated in neonatal intensive care units are suspected of having some sort of genetic disorder. But determining what those disorders are—estimates suggest the existence of up to 7,000 genetically-related diseases—and whether they are treatable is problematic because genomic sequencing and analysis isn’t routinely conducted on these infants. As a result, many children go undiagnosed for years, meaning they are frequently in and out of hospital, a cycle that is agonizing for parents, doctors, and nurses.

On the other hand, genome sequencing offers a tremendous opportunity to circumvent this outcome and increase the potential for treatments that could change the trajectory of a newborn’s health for a lifetime.

Currently, it can take weeks or even months to get results of genetic testing, a crucial time gap that neonatal physicians say needs to be slashed so they can begin providing the appropriate care as soon as possible. The goal of this project, called NeoSeq, is to cut that turnaround time to 72 hours or less at University Hospital by having clinicians identify infants in the NICU suspected of having a genetic disease or disorder. They will then ask parents to volunteer their blood, as well as that of their child, to be DNA sequenced using rWGS

“(rWGS) potentially reveals hundreds of thousands of changes that occur in DNA,” says Hunter Best, Ph.D., medical director of molecular genetics and genomics at ARUP Laboratories, a national reference laboratory and nonprofit enterprise of the University of Utah that will do the DNA sequencing. “By using mom and dad’s data, you can filter out all of the genetic ‘noise’ that’s not necessarily contributing to the child’s phenotype (traits). Once you filter out that noise, you can start zeroing in on what is actually contributing to the child’s condition.”

After sequencing, scientists affiliated with U of U Health’s Center for Genomic Medicine will use artificial intelligence technologies to analyze genetic variants in the child’s DNA. The technologies, developed by Mark Yandell, Ph.D., and other scientists at the Utah Center for Genetic Discovery , are capable of pinpointing one or two prime genetic suspects with 95 percent probability in less than four hours.

Once the interpretation of the identified genetic variant(s) is confirmed by ARUP medical directors, a research report will be prepared and doctors can begin planning for treatment based on its findings.

“It’s hard to overstate how transformational this will be for diagnosis and care in the NICU,” says Josh Bonkowsky, M.D., Ph.D., a U of U Health professor of pediatric neurology. “In five or 10 years, people will look back and realize that this is when it all shifted. This was a time that we stepped over a line in the sand into a new era.”

Small investigational studies conducted at U of U Health and ARUP Laboratories have already demonstrated the power of genomic analysis in diagnosing and treating disease in newborns. In addition, the Penelope Program at U of U Health incorporates genomic sequencing into the diagnosis and treatment of older children with undiagnosed diseases. This NICU project represents the next step forward in advancing diagnoses for children.

In all, more than 40 researchers and scientists from U of U Health’s Department of Pediatrics, Center for Genomic Medicine, Utah Center for Genetic Discovery, and ARUP Laboratories are involved in this project, capitalizing on existing expertise in genetics and genomic medicine. If the pilot is successful, U of U Heath plans to integrate rWGS into the routine clinical care of the most difficult cases in the NICU, joining the first wave of institutions in the nation to do so.

“What makes us unique is the collaborative nature of this project,” says Luca Brunelli, M.D., Ph.D., director of the U of U Health Neonatal Genomics Program. “We have a broad range of scientific minds involved. We have a tremendous opportunity to discover solutions to important questions and thus benefit so many young lives.”

The University of Utah Center for Genomic Medicine, ARUP Laboratories, Illumina, and the Margolis Foundation contributed to this project.

University of Utah Health is the state’s only academic health care system, providing leading-edge and compassionate medicine for a referral area that encompasses 10% of the U.S., including Idaho, Wyoming, Montana and much of Nevada. A hub for health sciences research and education in the region, U of U Health touts a $373 million research enterprise and trains the majority of Utah’s physicians, including more than 1,250 health care providers each year at its Schools of Medicine and Dentistry and Colleges of Nursing, Pharmacy and Health. With more than 20,000 employees, the system includes 12 community clinics and four hospitals — University Hospital; University Neuropsychiatric Institute; Huntsman Cancer Hospital; and the University Orthopaedic Center. For ten straight years, U of U Health has ranked among the top 10 U.S. academic medical centers in the rigorous Vizient Quality and Accountability Study, including reaching No. 1 in 2010 and 2016.