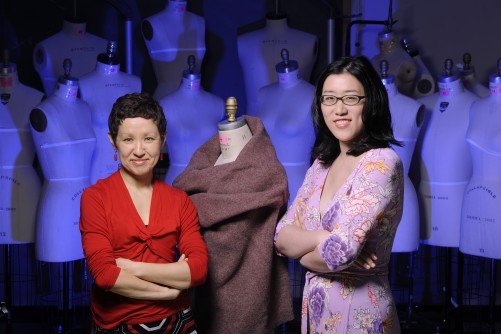 But according to a new study that Karpova collaborated on with ISU graduate student Juyoung (Jill) Lee, the U.S. industry's fast fashion focus has resulted in diminishing returns on market share -- both at home, and abroad in Japan.

"These findings confirm empirically what scholars have been speculating about," Karpova said. "There was a very strong push in the 1980s from the apparel industry and associated interest groups to make American consumers buy 'Made in the USA' apparel. The industry went this route in the hope that U.S. consumers would support the industry. And they didn't. They just didn't see value when they compared the quality of U.S. apparel with imports."

Lee and Karpova's study, "The U.S. and Japanese apparel demand conditions: implications for industry competitiveness," appears in the latest issue of the Journal of Fashion Marketing and Management. The ISU researchers used government trade and consumption data from 1995-2004 from both countries in their analysis.

Based on calculated price and income elasticities, they report that price sensitivity of U.S. consumers shaped the nation's apparel domestic market to keep product price low rather than increase its quality with respective price. They found that U.S. consumers were primarily price-conscious in purchasing clothes. By contrast, Japanese consumers increased their purchases of higher quality, domestically produced apparel, but decreased the purchase of low quality imported apparel when its price increased.

Census data shows that domestic output of U.S. apparel producers dropped by 40 percent between 1995 and 2004, even though the overall market expanded -- fueled by a 50 percent increase in imports. At the same time, the Japanese market shrank by 50 percent, but Japanese apparel firms held their domestic market share during that decrease. Lee says the U.S. now ranks third among apparel importers to the country.

The researchers contend that the U.S. apparel industry's focus on lower quality, low cost clothes -- an attempt to compete with inexpensive imports -- was a reason for decreasing industry competitiveness amid a booming U.S. market.

"I think because U.S. consumers have been price conscious, they generated the whole trend in the industry called 'fast fashion,'" Karpova said. "American consumers want styles to change quickly and they want to see new merchandise in their favorite stores almost every week -- and at affordable prices. And that has meant that U.S. companies produce lower quality items that last a shorter period of time."

The study found that Japanese consumers' preference for higher quality, luxury apparel and their willingness to pay for it encourage the nation's domestic producers to focus on those types of products. And that focus allowed the Japanese apparel industry to differentiate their output from the lower quality imported apparel and allow it to maintain its domestic market share.

Lee sees the study amplifying the cultural differences between the U.S. and Japanese apparel markets.

"The most interesting thing about the Japanese market is that they don't think young people have money and older people have all the disposable income," said Lee, who lived in Japan from 2008 to 2010. "So there are so many commercials on TV targeting older people buying very nice fashion clothes -- things you don't see in the U.S. And all of the department stores are filled with clothes that appeal to older people, too."

Karpova says the study should also give U.S. apparel producers something to think about as they move forward.

"I think the U.S. apparel industry has been and continues to be extremely strong in terms of its portfolio of global brands," she said. "But companies should look more into being socially responsible in their production -- no sweatshops -- with environmentally friendly materials and processes, sustainable design and style choices that will last a long time."

The researchers are extending their analysis to include data through 2007 for a paper they'll present in November at the International Textile and Apparel Association in Philadelphia.

Journal of Fashion Marketing and Management