U.S. Secretary of the Navy Ray Mabus to Speak at U.Va. Final Exercises 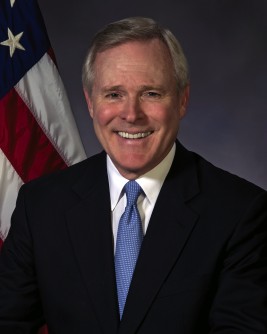 Ray Mabus, the U.S. Secretary of the Navy, will deliver the commencement address at the University of Virginia’s 185th Final Exercises on May 18.

Newswise — November 14, 2013---Ray Mabus, the U.S. Secretary of the Navy, will deliver the commencement address at the University of Virginia’s 185th Final Exercises on May 18. The former governor of Mississippi and ambassador to Saudi Arabia will speak on the Lawn following the traditional academic procession.

“Secretary Mabus provides a great example of national leadership and commitment to service for our graduating students,” U.Va. President Teresa Sullivan said. “All of us in the University community are looking forward to welcoming Secretary Mabus to Charlottesville and hearing his remarks.”

“I am honored to have the opportunity to address the Class of 2014 and congratulate them for their years of hard work,” Mabus said. “The principles of service and dedication to the search for knowledge learned at the University of Virginia will serve as a foundation for their success in life, and inspire them to be part of something larger than themselves.”

Since beginning his tenure in 2009 as the top civilian official in the U.S. Navy, Mabus has taken on several goals: improving the quality of life of sailors, Marines and their families; decreasing the department’s dependence on fossil fuels; and revitalizing the Navy’s shipbuilding program. Last year, he introduced the “21st Century Sailor and Marine” initiative, which aims to build and maintain the most resilient and ready force possible.

Mabus has directed the Navy and Marine Corps to obtain at least 50 percent of their energy from alternative sources by 2020. As part of that ambitious goal, the Navy last year demonstrated the Great Green Fleet, a carrier strike group in which every ship and aircraft operated on nuclear energy, biofuels and other alternative energy sources.

Mabus is responsible for a U.S. Navy that employs almost 900,000 people, commanding a budget of more than $170 billion. As leader of the world’s sole global navy, Mabus has traveled nearly 715,000 miles to more than 95 different countries to maintain and develop relationships with other national and international leaders and to visit with sailors and Marines deployed or stationed around the world.

Increasing the size of the U.S. naval fleet and protecting the industrial base have been top priorities during Mabus’ tenure. Under Mabus, the Navy has gone from building fewer than five ships a year to having more than 60 ships under contract.

In addition, Mabus was appointed by President Obama in June 2010 to prepare the long-term recovery plan for the Gulf of Mexico following the Deepwater Horizon oil spill. Mabus’ report drew bipartisan support, and Congress enacted many of its recommendations as the Restore Act. The law included a fund to aid in the Gulf Coast’s recovery by distributing 80 percent of any civil penalties awarded as a result of the damage caused by the disaster.

Before his appointment as Secretary of the Navy, Mabus served as governor of Mississippi from 1988 to 1992, the youngest individual elected to that office in more than 150 years. Mabus was ambassador to the Kingdom of Saudi Arabia from 1994 to 1996 and later was chairman and CEO of a manufacturing company.

In October, the Class of 2014’s Graduation Committee announced that Denver Broncos quarterback Peyton Manning, a four-time winner of the National Football League’s Most Valuable Player award and founder of a charitable organization that has donated more than $6.5 million in grants and programs to youth-based community organizations, will be the featured speaker at Valedictory Exercises on May 17.