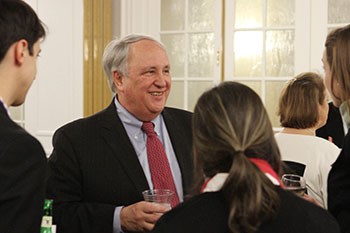 Newswise — CHARLOTTESVILLE, Virginia — Unemployment will fall, inflation will simmer and the Dow will pop almost 500 points by the end of 2014, according to the predictions of economist Alan R. Beckenstein, professor of business administration at the University of Virginia Darden School of Business. Beckenstein made the moderately optimistic forecast at the annual meeting of the Charlottesville chapter of Darden Business School alumni held Thursday, 16 January. During his presentation, he made clear he also expects some bumps in the road ahead. “It’s been five years since the last recession ended and six and one-half since the subprime crisis,” said Beckenstein. “That’s a long time without a major shock. Expect something negative to happen in the next two years. We just don’t know exactly what it will be.” His forecast for 2014, while certainly not bullish, is at least positive. He foresees a real GDP growth of 2.6 percent, core inflation held at 1.8 percent, an unemployment rate going down to about 6.7 percent for the yearly average and a closing Dow Jones Industrial Average (DJIA) at 17,050. The Dow is currently at about 16,500. The stock market, according to Beckenstein, will continue its amazing run. But he says that despite the bull market, people still don’t seem to have much confidence in it.

“How many people believe the market is going to stay there and also change their spending habits?” remarked Beckenstein. Beckenstein, an economist, likes to joke about his profession while analyzing the state of the United States and world economies. “An economist is a numbers person who didn’t have the personality to become an accountant,” he explained to about 60 Darden alumni who attended the annual event.

Beckenstein’s predictions for 2013 were near the mark on unemployment — 7.3 percent predicted compared to 7.49 percent actual — and on inflation — 1.8 percent predicted compared to 1.7 percent actual. But he was a bit off the mark in guessing GDP growth, which he opined would hit 2.4 percent. Instead it was more sluggish at 1.8 percent. His DJIA prediction, like many people’s, was way off. He called for the Dow to stand at 13,900 by the end of last year; instead it bulled to a whopping 16,576 points. Beckenstein says growth was steady but slow last year in part because of the continuing effects of the structural shock — a bursting bubble — the economy underwent six years ago. Meanwhile, core inflation has stabilized and the unemployment rate is in a state of steady decline “and there is real job growth behind that,” he said. “The number of ‘hardcore unemployed,’ or those without a job for a half year or longer, is high, but declining. However, skills are eroding for that group.” The debt burden of households has improved and servicing the cost of debt has been made less burdensome by very low interest rates, he says. Business savings “is quite strong” though business investment is cautious. That’s because businesses are taking a wait-and-see attitude, hoping for a stabilized “policy environment:” and for Europe to “calm down.” “Steady and more rapid growth prospects — and confidence in government policies — would be necessary to inspire investment,” Beckenstein added. As for Europe, Beckenstein said the European Central Bank “made an enormous commitment to defend the euro. That means it’s going to last longer than it should. Sooner or later, all bad things fail; the Eurozone should not include so many disparate economies.” Beckenstein even took on health care: He said that if he had to “keep it as it is or kill it, I’d go with it. I prefer to see it fixed. We need compromise and improvements. The key to solving health care is to have incentives to lower risks, including preventive care … The U.S. costs are out of control and our failure to cover many citizens is the laughing stock of the developed world. Most of the rest of the world does it better.”

About the Darden School of BusinessThe University of Virginia Darden School of Business is one of the world's leading business schools, offering MBA, Ph.D. and Executive Education programs. The unique Darden experience combines the case study method, top-ranked faculty whose research advances global managerial practice and business education, and a tight-knit learning environment to develop responsible and complete leaders who are ready to make an impact.

For questions or information, contact Abena Foreman-Trice or a member of the Communication team.