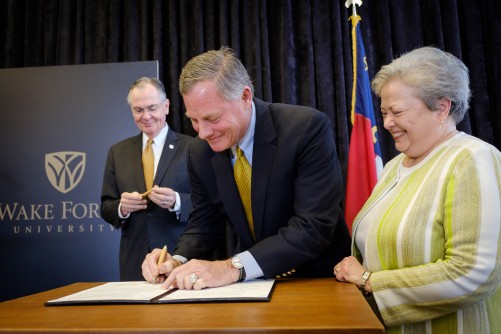 Wake Forest University and Sen. Richard Burr (R-NC) announce the university as the repository of his public papers, during an event in the Z. Smith Reynolds Library on Monday, March 12, 2018. 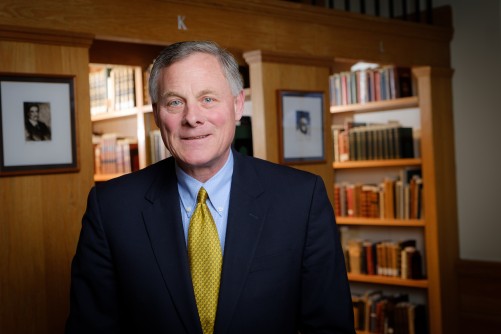 "I am pleased to announce that I'm designating Wake Forest University as the repository for all of my official records, documents, memorabilia associated with my entire Congressional career,” said Burr in a special ceremony in Wake Forest’s Z. Smith Reynolds Library.

“The education and experiences I gained at Wake Forest prepared me for the rest of my life and set a foundation for service.”

The papers will be curated by the Special Collections & Archives department at the Z. Smith Reynolds Library. The collection includes photographs, sound and video recordings, manuscripts, letters, speeches, handwritten notes and other documents from more than two decades of Burr’s service in the U.S. House of Representatives and the U.S. Senate.

“We are honored to accept Sen. Burr’s offer to house his Congressional papers. From these documents, students will read about situations that demanded leadership, collaboration, patience and wisdom,” said Wake Forest President Nathan O. Hatch. "Not only will his gift allow us to better understand how legislative politics works, we will be well positioned to establish a world-class resource for students interested in being leaders in this realm.”

In addition to his papers, the University is in the preliminary stages of working with the Senator to plan for the Richard Burr Center, in partnership with the library. Early plans include attracting global leaders to Wake Forest for speaking engagements and interaction with students, enabling scholars to utilize the vital Burr papers collection for research and exploring ways for students and alumni to take advantage of the Wake Washington Center in Washington D.C., including internships and mentoring opportunities that will help launch their careers in the nation’s capital.

During a brief ceremony, Burr, Hatch and Wake Forest Board of Trustees Chair Donna Boswell signed the official agreement regarding the transfer of papers and related materials to Wake Forest.

First elected to the U.S. House of Representatives in 1994, Sen. Burr served five terms in the House and is currently serving North Carolina in his third term in the U.S. Senate.

In the Senate, Burr serves as Chair of the U.S. Senate Select Committee on Intelligence. He also sits on the Health, Education, Labor, and Pensions Committee and the Finance Committee.

The son of a minister, Burr and his family moved to Winston-Salem, N.C., when he was a young child. After graduating from Wake Forest University in 1978, he began his career by spending 17 years in business with Carswell Distributing, a wholesale commercial products company.

In 2013, Burr was awarded Wake Forest’s Distinguished Alumni Award, an honor given to alumni who reflect the University’s motto Pro Humanitate through service to their communities and to Wake Forest.